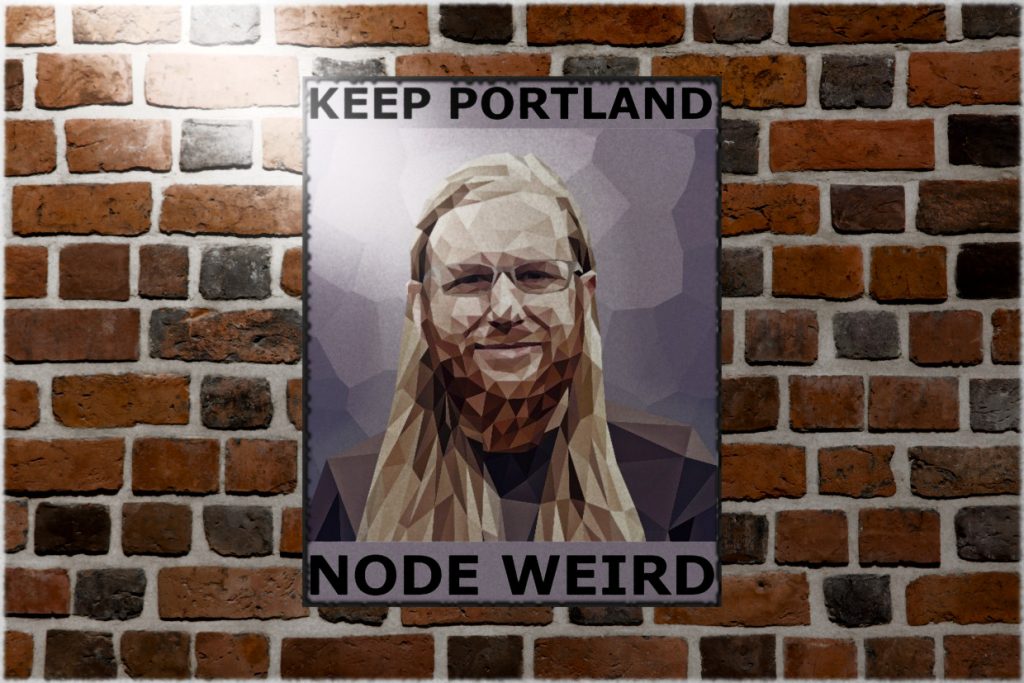 It was a grey drizzly day in December, and the New Stack founder Alex Williams, his forehead nuzzled into his trademark journo-fedora in an effort to escape the harsh florescent lights, slipped quickly through the glass doors of the Hilton, though not quickly enough to prevent a swirl of staticky dust from the light-rail-inlaid streets of Portland, Oregon entering along with him.

The lobby smelled of rain-dampened valet parking mats and savoy cabbage rolls with eggplant, zucchini and jicama in a lemon balm broth. At one end of the hallway a coloured poster advertising the pancake breakfast — which had already been served and broken down — was turned in its now-uselessness facing the wall. Dozens of polished escalators teemed with many of the several hundred Node.js Interactive 2015 attendees, metabolizing those short-stack carbohydrates and grateful that the node.js and io.js projects had resolved their differences, as the electric currents sizzled with September’s general release of Node.js v4.0.0. 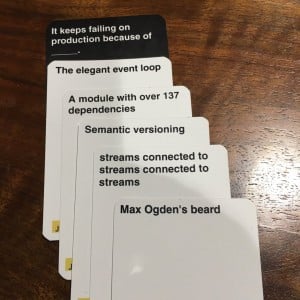 Portnodia: Max Ogden is so notorious around these parts that his beard serves as an answer in the Portland-based New Relic’s Node-flavored “Cards Against Humanity” game deck.

From inside a partitioned conference room, a feline voice was reading out data freshly mined with open source modules. Outside, even through the thick dark wood paneling, could be heard the townsfolk celebrating the Timbers MLS Championship. At the center of an elegant foyer during the peak of an inter-session break, Williams met up with his subjects: the blond-bearded Oregon native Max Ogden, the GitHub developer and designer Jessica Lord of the Warner Robins, Georgia Lords, and Carter Thaxton, VP Technology of Voicebox Karaoke Lounge.

In the distance, along a mossy concrete pathway that girdled a still-affordable craftsman home of deceptively immense square footage, a southeast neighborhood cat unwittingly sashayed past a streaming HD camera toward a bowl of artisan chow.

A macabre grin crept across Williams’ face. “Portnodea,” he thought, to himself at first; soon he would utter his contrivance out loud, and perhaps contemplate creating a site for his idea on Neocities. But now, in a silent and ceremonious sort of way, the nascent neologician unveiled a comically over-sized podcasting microphone and presented it to the group, meeting each in turn with his piercing blogger’s stare. With a brush of his mouse finger, he powered-up some solid-state storage and hit the “record” button, so as to capture this episode of The New Stack Analysts. Listen here:

Later, against the backdrop of a sudden downpour, the facial recognition software would identify the cat as a regular, and a bot would totally tweet its presence.

Featured image made by Luke Lefler using this and that with GIMP 2.8.