The Perfect Storm of Node.js and Docker 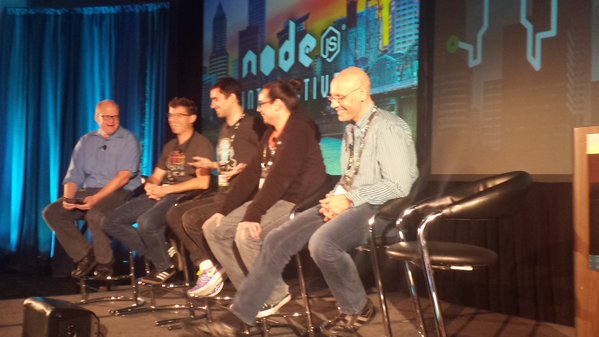 One more offering here from Node.js Interactive in Portland, and this one’s a frisky discussion that endeavored to focus on the symbiosis of Node.js and Docker. It succeeds not only to inform but also to entertain. The New Stack founder Alex Williams roamed the aisles with microphone commenting and fielding questions à la Phil Donohue while TNS Managing Editor Joab Jackson moderated the panel:

Thanks again to the conference organizers, whose video of the proceedings provided the audio track for this episode of The New Stack Analysts podcast.

#75: The Perfect Storm of Node.js and Docker

Drinking game buzzwords such as “Kubernetes” came early and often, and Elger was the first to introduce “microservices.”

Cantrill seconded the observation that speed is driving adoption. “Uber and Amazon have managed to shake up mainstream commerce in a way that other revolutions didn’t,” he said, and noted that within many companies, “people are terrified of their competition, and software is eating the world.” Much of what’s happening, he said, “is about using software as a competitive weapon.”

No matter what velocity developers and their tools achieve, operations people will want to maintain a slow and stable pace, the panel agreed, complexity being one of the first and most daunting hurdles.

According to Groundwater, new users of the Docker command line interface will encounter many bumps and dents along the road.

“It can actually be an obstruction,” he said. “Sometimes it’s just simpler to avoid it until later. Generally, everyone has their ‘I learned the idiosyncrasies of the Docker CLI’ moment, and then usually after that they’re better.”