The state of Docker and the container ecosystem was the touchstone for discussion at The New Stack’s most recent pancake breakfast / podcast recording session, hosted by Alex Willams at ContainerCon 2015.

Joining Alex were Krishnan Subramanian, director of OpenShift strategy at Red Hat, Aneel Lakhani from the marketing team at SignalFx, Erica Windisch, a security engineer at Docker, and Sam Charrington, analyst with The New Stack.

After a brief intro and a few use case stories from the audience, the focus narrows to running Docker in production, which, said Aneel, “requires the same things you you need to run anything else in production.”

“You still need some kind of scheduling system that tells resources where to go when you’re splitting resources between things, whether it’s in VMs or containers,” he said. 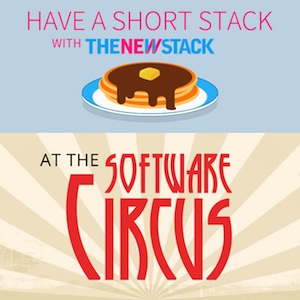 Alex and Sam discussed putting together The New Stack’s Docker and Container eBooks Series, and Sam talked about having just finished compiling an ecosystem directory including more that 100 participants that have some kind of Docker products.

“The thing that I keep running into in talking to folks that are not in the echo chamber,” said Sam, “is just, ‘it’s confusing,’ and it’s still early. A lot of us went through the same thing with cloud. We’d sit around in rooms like this and talk about, ‘Are people using cloud? Is cloud really going to be a thing? What do I need to do to get to cloud?’ It’s very similar but it’s happening a lot quicker.”

“This conference has many kernel hackers and a lot of builders of the tools and ecosystem that drives Linux. As such, there’s a number of people — especially operators — who are concerned about deploying containers at scale and managing their data center — kind of the cloud OS or the cloud computing model.”

“Then we have technologists who are simply caring about the technology that drives containers,” he continued. “Many of us just look at a container and think, ‘this is the isolation between different processes on the host, and our concern is making that technology better, working at that technology,’ … as opposed to the orchestration and scheduling problems that we have at scale. A PaaS isn’t a concern if you’re just hacking on the kernel.”

Alex persuaded Krishnan to compare Kubernetes and Mesos. “Right now, Kubernetes is emerging as a standard for orchestration, but there are others, including Docker’s own orchestration plane, and Mesos calls itself a ‘datacenter operating system,’ so it’s an open game there,” said Krishnan.

After a couple more use cases from the audience, the focus shifts to governance of microservices.

“Microservices are a cool way to deploy your applications,” said Krishnan, “and platform as a service is a cool way to abstract away the underlying complexities, but it does add complexities at the higher levels of stack.”

However, both Krishnan and Aneel said that, regarding tools to handle the governance of microservices, not much exists for now.

Alex asks Krishnan how OpenShift manages policies. “We manage the policies on the deployment level. We don’t handle the governance or management of microservices. We are a platform to deploy microservices, so we handle everything underneath,” said Krishnan of OpenShift.

“Governance is a large topic area,” said Aneel, “everything from the provenance of the machine, and the image, and the contents of the image at the base level, through what’s accessing the image. Is the image providing the correct software to the people and things that are accessing it? How do you route data?”

For future short stack sessions on the pancake breakfast circuit, keep an eye on the events section of The New Stack.

Docker, Red Hat and SignalFx are sponsors of The New Stack.

SHARE THIS STORY
RELATED STORIES
Acorn from the Eyes of a Docker Compose User Securing Windows Workloads WebAssembly Needs Schedulers, and Kubernetes Doesn't Quite Fit the Bill What Is Apptainer and How Do You Install It on Ubuntu Server? .NET 7 Simplifies Route from Code to Cloud for Developers
TNS owner Insight Partners is an investor in: Docker.
SHARE THIS STORY
RELATED STORIES
4 Ways to Optimize Your Workflows with Docker Extensions Tutorial: Deploy Acorn Apps on an Amazon EKS Cluster Deploy a Container Stack in Portainer from a GitHub Repository 3 Container Practices to Boost Your Security Posture Container Security: A Troubling Tale, but Hope on the Horizon
THE NEW STACK UPDATE A newsletter digest of the week’s most important stories & analyses.
The New stack does not sell your information or share it with unaffiliated third parties. By continuing, you agree to our Terms of Use and Privacy Policy.