The Wild, Wild West of Containers at DevOpsDays India 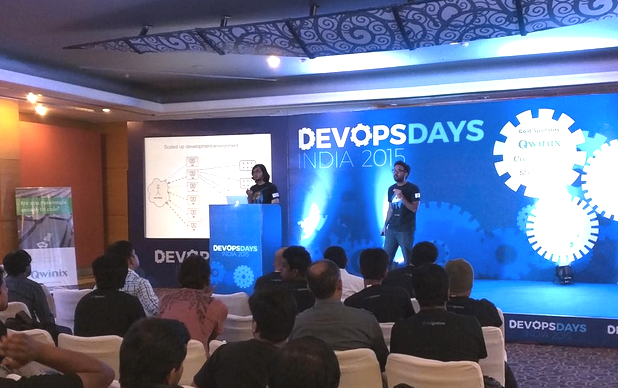 This year’s DevOpsDays India was a two-day single track event especially focused on containers, with more than 300 attendees and speakers from various technology domains. The New Stack’s community manager, Atul Jha, spoke with three attendees at the Bangalore conference for this edition of The New Stack Analysts podcast.

#59: The Wild, Wild West of Containers at DevOpsDays India

Joining Atul to discuss the DevOps ecosystem were Ragesh Krishna, VP of engineering with Shippable; Aditya Patawari, infrastructure development at BrowserStack; and Neependra Khare, principal software engineer at Red Hat. We’d like to thank the people on the show for sharing their personal opinions.

Before diving into Docker, OpenShift and Kubernetes, they discuss how the emergence of containers has changed the game, and they weigh in on the wealth of new tools.

“There’ll always be room for more choices,” says Aditya. “I think that’s the best part of having multiple tools, because you get to choose the right thing depending upon your requirements and your expertise.”

Ragesh remarks that the current proliferation of tools is like “the wild, wild west.” He believes a “dilemma of choice” is still to come, but he says that, as of now, there’s no clear winner in this space.

“How do we make people successful?” is the question that should be being asked, he says.

“It’s not going to be whether they prefer a particular technology, but, ‘Is this the tool that lets me get the most done with the least amount of effort?'”

“The winner will be the tool which can integrate all of the technologies coming around,” says Neependra. “Currently, everybody’s kind of experimenting and evolving.” Nependra has written a book on Docker, and he helps organize a Docker meetup in Bangalore.

Atul asks Nependra about the trends he sees in Bangalore, in terms of who attends the meetups and what they talk about. According to Nependra, Bangalore is home to a good user base, with many enterprise companies well-represented at the meetup.

“In the first meetup we probably had a dozen people show up,” says Ragesh. “In the latest ones we can see a lot of interest happening in the discussion groups. I think probably close to a hundred people show up for the meetups.” Ragesh says that, for now, those joiners are mostly just looking, and that there hasn’t been a lot of adoption yet, but he believes that’s going to change very soon.

“It’s going to be like a tidal wave once it begins,” he says.

Aditya, a long-time Fedora developer, sees a fair number of contributions from India to Kubernetes, Fedora Cloud, and Fedora Dockerfiles. “I’d like to see that number increase dramatically,” he says, “and I think that will happen.”

Atul asks Ragesh about Shippable’s early adoption of Docker. “We did do a prototype where we built our whole build system on top of LXC at the base level,” recalls Ragesh, “but that was around the time when we met with the Docker team. At that point, Docker really wasn’t an open source project yet, and our CEO met with their team and they said, ‘You guys are doing this. We have this thing internally that we’re planning to open source. It looks like we’re both trying to do the same thing, so why not try this out?’ That’s when we really took a look at it, and it was fantastic.”

“The way it simplified the things we wanted to do,” says Ragesh, “it was so much easier with Docker that it was a no-brainer.”

“We adopted it internally and it changed so many things for us that we almost immediately realized that this was going to change how deployments happen everywhere. We decided to bet on it big three years ago,” he continues. “At that point we were probably one of the first five or six companies that decided to go to production with Docker, and the rest is history.”

“Networking on top of Docker has been a huge pain point for us,” says Ragesh, “especially at the scale at which we try to do it at Shippable. We’ve tried a bunch of different approaches. Kubernetes helps us to some extent, and Red Hat is doing a lot of interesting stuff with OpenShift.”

“It’s not a solved problem yet, but we’re getting there,” he says.

Aditiya mentions another problem that he believes will be difficult to solve: changing the mind-sets of engineers and developers. “We are dramatically changing their deployment strategies, their overall workflow,” he says. “The changes we are trying to bring in are not going to hamper their productivity. There are long-term benefits of moving in this direction.”

“People with legacy code don’t understand how they’re going to make this shift,” says Ragesh. “It’s a big leap for them.”

Later, Ragesh describes one way in which that leap has paid off for Shippable.

“In terms of infrastructure costs, we’ve been able to go down from our AWS bill by around 70 to 72 percent. That in itself is just one spectacular saving.”

Docker, Red Hat, Shippable and Weaveworks are sponsors of The New Stack.