Making an Automation Sandwich with Habitat and Chef 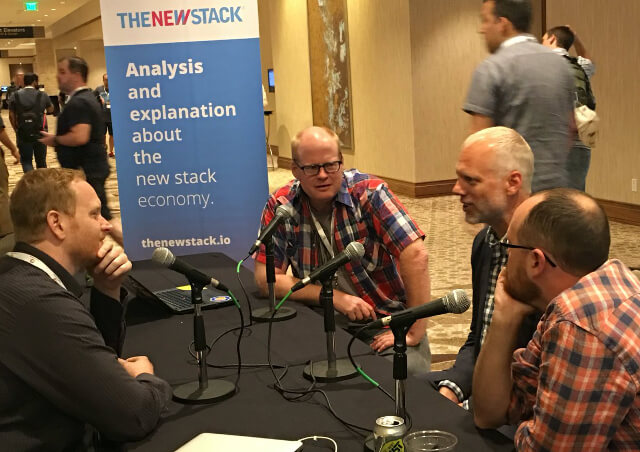 Helping administrators automate their infrastructure deployments has been the core focus of Chef, though it has recently branched out with the announcement of its newest project, Habitat, which aims to help developers automate the deployment of applications. When combined, the two present a powerful platform to provide organizations the flexibility to manage their entire application stack when running at scale, even if it is powered by legacy hardware.

In this 98th episode of The New Stack Analysts embedded below, we take a look at the ways that Chef is positioning its latest offerings Automate, which includes Habitat and the Chef namesake software, to help organizations automate their workflow from any angle. The New Stack’s own Lee Calcote and Joab Jackson spoke with Chef chief technology officer Adam Jacob and Chef CEO Barry Crist to get the latest on the above during last week’s ChefConf 2016 event.

#98: Making an Automation Sandwich with Habitat and Chef

For those that had yet to see Habitat in action, Crist offered an explanation of the software, including how Habitat could solve some of today’s more common pain points developers may face.

“With Habitat, there was a fair bit of thought. Our mission is to figure out how to help these companies go faster. What we saw was there was too much difficulty in how do you take an app that’s been running in your business forever, ‘How do I take that thing and how do I reconcile that thing with the brand new green field continuously delivered world?’ When we started looking at that technology, it became clear we’d been looking at it backward, from the infrastructure’s view this whole time. We figured out that if we thought about it from the application’s point of view it might work easier,” said Jacob.

As enterprises make the shift toward utilizing new technologies in their stack, Chef remains focused on helping its customers make the most of their stack when running at scale.

“There’s lots of new technology there, we wanted to think about what we wanted our platform to look like being informed of those technologies, and how can we ease some of the burdens our customers are facing there,” Crist explained. Habitat is also an open source offering, which allows for developers in the community to contribute to the project and help to steer the direction it takes moving forward.

As the discussion went on, Jacob highlighted that Chef and Habitat ultimately worked together like, “Peanut butter and jelly,” for automating one’s applications and infrastructure together, especially when used as components within Automate. “Applications need infrastructure, they have to run on something. That’s Chef’s sweet spot. What Habitat is great at is managing those applications and their life cycle. When you think about something like Automate where you have a single workflow that can address both areas, those same pipelines can be moving through the infrastructure code in the same way. That’s when the PB & J action comes together,” Jacob explained.

SHARE THIS STORY
RELATED STORIES
Why You Can’t Afford to Miss Data Decisions New Ebook: A Blueprint for Supply Chain Security Case Study: How BOK Financial Managed Its Cloud Migration How Canva Uses Data to Prioritize QA Testing Cloud Lessons to Help Developers Improve ESG Impact
SHARE THIS STORY
RELATED STORIES
Unleashing Git for the Game Development Industry The Future Stack of Code Review Why Does the NSA Care about the Software Supply Chain? A Look at Slack's New GitOps-Based Build Platform 6 Pull Request Tricks You Should Adopt Now: DoorDash
THE NEW STACK UPDATE A newsletter digest of the week’s most important stories & analyses.
The New stack does not sell your information or share it with unaffiliated third parties. By continuing, you agree to our Terms of Use and Privacy Policy.