TNS Research: How Many Company Developers Should Work on Open Source? 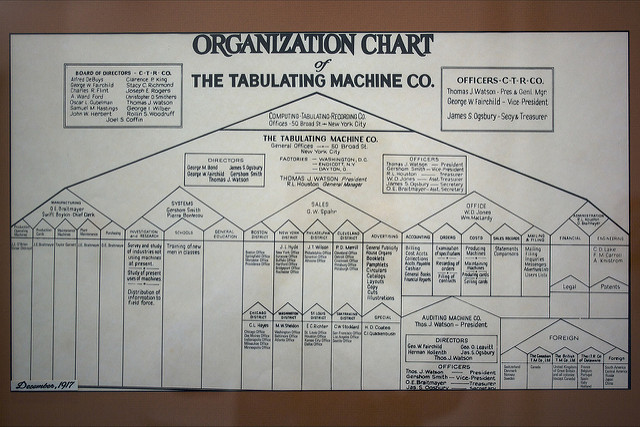 How many employees in your organization contribute to open source projects? Earlier this year, The New Stack asked this question to companies in the container ecosystem.

Among the 36 responses we received, the median response was ten employees, which is a lot, but even more significant if we look at the size of the companies involved. Taking this into account, we found that the median company actually said 47 percent of their employees were contributing to an open source project.

We found that the larger the company, the fewer employees are involved with open source software (OSS). In addition, we identified a relationship between a company’s maturity and the number of developers it employs. Overall, this research confirms that container companies are indeed are developer and OSS-centric.

Almost half of all employees contributing to open source is a shocking figure so we decided to investigate further. We found that company size and the survey’s semantics impact the results. 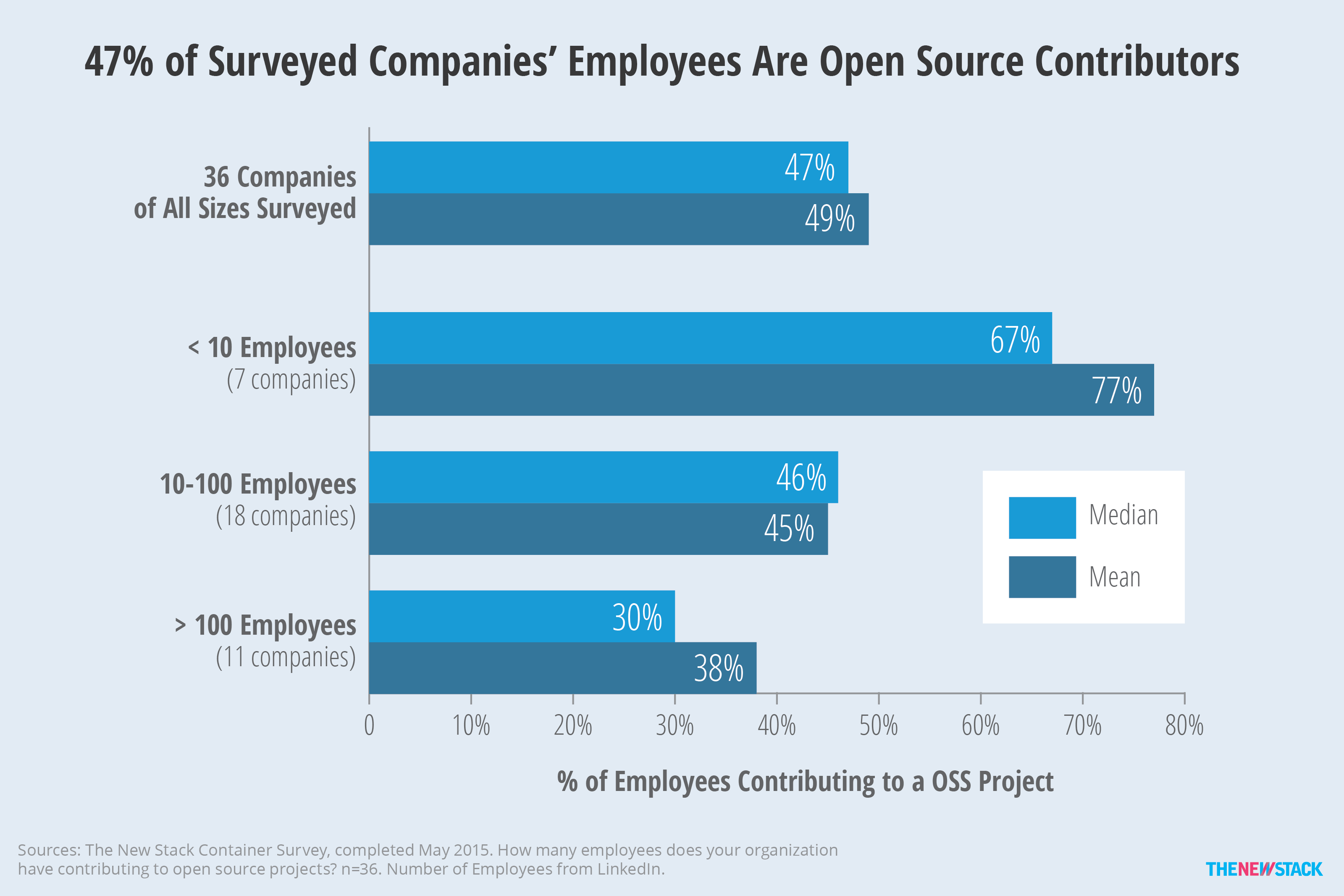 Survey data was combined with LinkedIn stats to get a perspective on how many employees contribute to open source projects.

There are varying viewpoints on what it means to be a contributor to an open source project. Even GitHub’s definition of a contributor differs based on what dashboard you use. In their most narrow definition, a contributor is someone who makes a commit to a project. Looking at individual responses, we believe not everyone used this definition. In fact, we found that two executives from midsize companies had given responses that were identical to the size of their entire company. Instead, these executives were probably thinking that since their core product is based on open source then everyone that works for them is supporting open source.

The New Stack evaluated the complete list of contributors of many of these company’s open source projects and can attest to a very high level of participation in open source projects. Thus, although we are skeptical about the accuracy of every response, we believe the survey accurately depicts the importance of OSS to these companies.

If your company says it is dedicated to open source, how many employees should be contributing to open source projects? And should those projects be directly related to your commercial activities? How you answer these questions may influence how “open source” friendly your company actually is.

These types of questions make us think about how companies should be allocating their developer “human resources.” So, we looked at the number of developers and software engineers employed by various companies. Using these figures, we hope to help companies determine how many of its employees should be developers and inform how much of their time should be dedicated to open source projects.

We focused on 95 container-related companies that were covered in the first of a series of eBooks about Docker and the Container Ecosystem. Data about the number of employees were collected using LinkedIn by selecting “Current Company” via a checkbox and then searching for employees based on their current employer. The specific search criteria in the Title field was “’software engineer’ OR developer.” Median and average figures are first calculated per company. A full list of the companies investigated, along with non-survey related data, can be found here.

The broader group of 95 companies tended to be larger than those that completed the survey, with a median of 41 employees. However, even as the number of developers employed changes, the percentage of employees that are developers remained relatively constant.

So, we dug deeper into these companies and found more trends by looking at company maturity. It wasn’t surprising to find that younger companies have fewer employees. It is important to realize that in many startups the CEO or founders are also developers but do not identify themselves as such on LinkedIn. If we considered them as developers, many companies would likely have half of their employees involved with coding.

The middle-aged companies, those founded between 2010 and 2013 have the largest percentage of employees with “software engineer” or “developer” in their title. Many of these companies are focused on growing their development teams, to find companies with more than 30 percent of their employees being developers. Among this group are The New Stack sponsors Codenvy and SignalFx. The older companies have fewer developers overall, but this is partially due to IBM (eight percent of 418,168) and HPE (five percent of 219,111) bringing down the numbers. 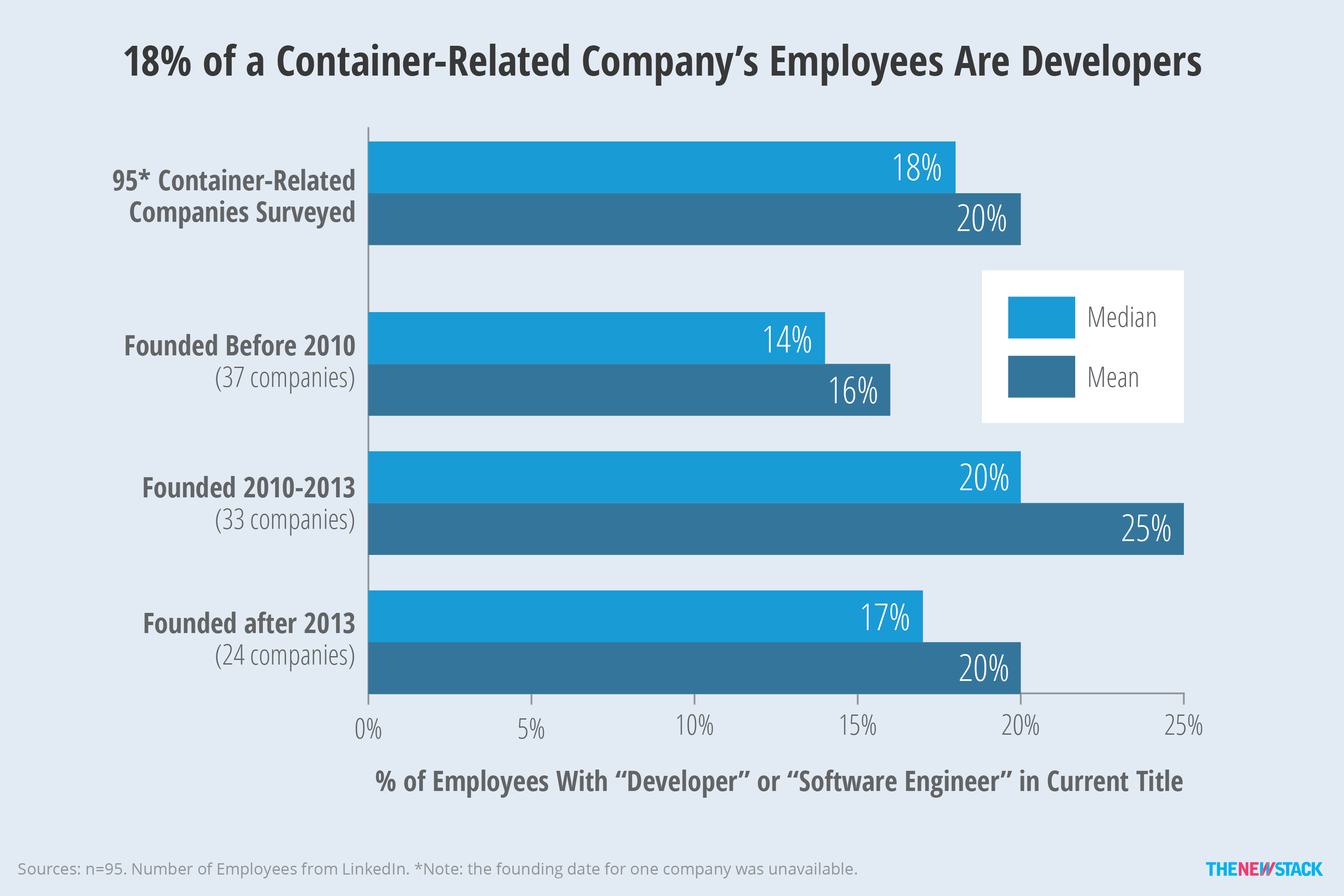 Although the number of both employees and developers goes up over time, the percentage plateaus.

Using LinkedIn to determine the number of developers can be problematic because it relies first on users self-identifying as actual employees of a company and then as a person with “developer” in their title. That being said, it is true that as companies grow, they by their very nature will increase their headcount.

Codenvy, HPE, IBM, SignalFx  are sponsors of The New Stack.

Lawrence has generated actionable insights and reports about enterprise IT B2B markets and technology policy issues for almost 25 years. He regularly works with clients to develop and analyze studies about open source ecosystems. In addition to his consulting work,...
Read more from Lawrence E Hecht
SHARE THIS STORY
RELATED STORIES
Tutorial: Deploy Acorn Apps on an Amazon EKS Cluster How to Deploy Containers with nerdctl 4 Ways to Optimize Your Workflows with Docker Extensions Case Study: How SeatGeek Adopted HashiCorp’s Nomad Connect to Remote Docker Machines with Docker Context
TNS owner Insight Partners is an investor in: Docker.
SHARE THIS STORY
RELATED STORIES
WebAssembly Needs Schedulers, and Kubernetes Doesn't Quite Fit the Bill Install Dozzle, a Simple Log File Viewer for Docker Tutorial: Deploy a Full-Stack Application to a Docker Swarm .NET 7 Simplifies Route from Code to Cloud for Developers How to Deploy Containers with nerdctl
THE NEW STACK UPDATE A newsletter digest of the week’s most important stories & analyses.
The New stack does not sell your information or share it with unaffiliated third parties. By continuing, you agree to our Terms of Use and Privacy Policy.