TNS Research: How Much Did it Cost to Build the Kubernetes Ecosystem? 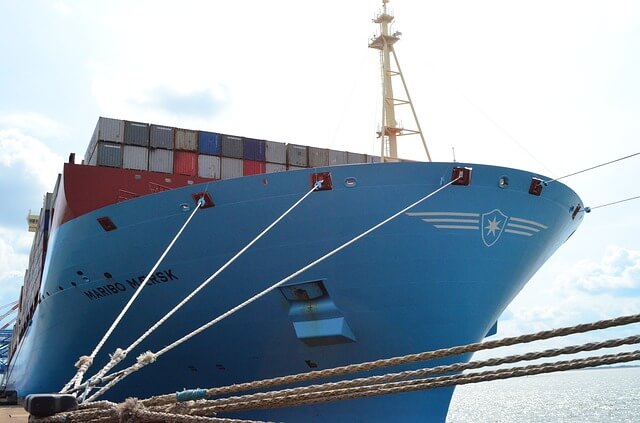 Editor’s Note: The original article has been updated to include rkt in the calculations. Also, on June 30, 2020 the interactive widget used for the calculations was replaced with screen shots.

What did the Kubernetes ecosystem cost? A couple of weeks ago the CoreOS CEO Alex Polvi posed this question. With the help of Black Duck Open Hub open source directory, we were quickly able to get an approximate answer.

Based on the lines of code in each project, we estimate that it cost about $120 million to get to Kubernetes 1.4. Albeit this is really a back-of-the-envelope guess, but it better than nothing, and it is a metric that let you compare it to other closed-source development projects.

Thought exercise, how much did it cost to get the ecosystem from scratch to k8s 1.4? Total cost of building etcd, docker, k8s itself, etc..

How did we get to that number? We made many assumptions. First, that the ecosystem is only comprised of the Kubernetes, Docker, etcd, and rkt projects. Second, that the only costs associated with a projects are developer salaries. Then, Black Duck’s calculator used the COCOMO software costing model that relies on two basic inputs: 1) lines of code and 2) developer salary. Per Black Duck, “COCOMO was created to model large institutional projects, which often don’t compare well with distributed open-source projects. Beyond just development time, COCOMO is meant to include the design, specifications drafting, reviewing, and management overhead that goes along with producing quality software.” 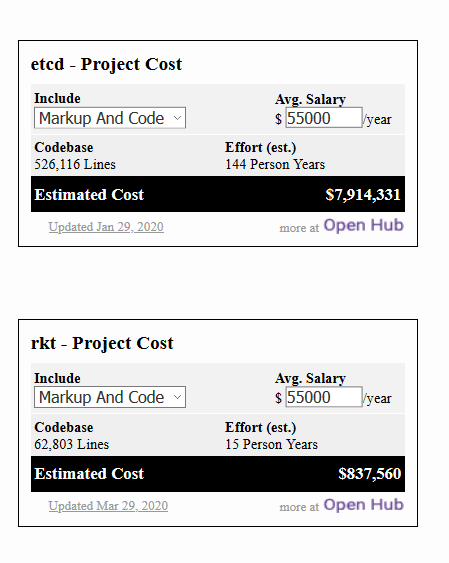 According to the statistics on Open Hub, there are 2,609,454 lines of code in these projects. At an average salary of $55,000 a year, that totals over $40 million dollars. We know that many of Docker contributors did so in their free time, but how many is hard to determine. That being said, we also know that the average Google employee makes much more, so we looked at what total development costs would be if the average developer had salaries of $165,000 and $330,000 a year. That middle guess comes out $89 an hour per developer.

All of these figures still seem extremely low, almost chump change for those familiar with the world of enterprise IT. Don’t be fooled. The numbers do not take into consideration all the marketing, administration, risk, profit margin, et cetera that gets loaded into the final price of a project. And that doesn’t even take into consideration how much manpower it takes to install, customize and operate each deployment. That is where the real money, if not the profit, is.

Lawrence has generated actionable insights and reports about enterprise IT B2B markets and technology policy issues for almost 25 years. He regularly works with clients to develop and analyze studies about open source ecosystems. In addition to his consulting work,...
Read more from Lawrence E Hecht
SHARE THIS STORY
RELATED STORIES
4 Ways to Use Kernel Security Features for Process Monitoring Container Security: A Troubling Tale, but Hope on the Horizon The Next Evolution of Virtualization Infrastructure Connect to Remote Docker Machines with Docker Context How to Deploy Containers with nerdctl
TNS owner Insight Partners is an investor in: The New Stack, Docker.
SHARE THIS STORY
RELATED STORIES
WebAssembly Needs Schedulers, and Kubernetes Doesn't Quite Fit the Bill Install Dozzle, a Simple Log File Viewer for Docker Docker versus Kubernetes: Start Here Connect to Remote Docker Machines with Docker Context Kubernetes Needs to Take a Lesson from Portainer on Ease-of-Use
THE NEW STACK UPDATE A newsletter digest of the week’s most important stories & analyses.
The New stack does not sell your information or share it with unaffiliated third parties. By continuing, you agree to our Terms of Use and Privacy Policy.