Generative AI and federated social media were two tipping points on the internet in 2022. Check out our other picks in this year-end review.
Dec 12th, 2022 11:51am by Richard MacManus 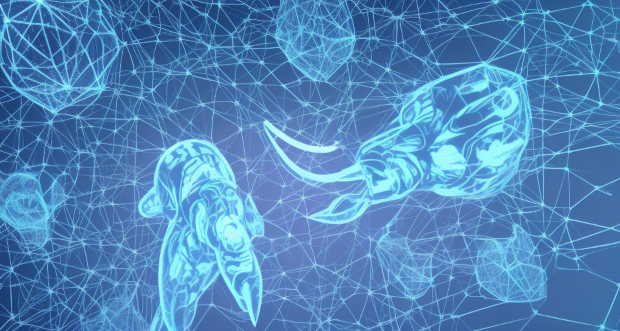 Tipping points that change the course of internet technology are not rare, but they also don’t come around often. I think we’ve seen two massive tipping points in 2022: generative AI, which has leapt to the forefront of internet culture this year, and the beginnings of a movement away from centralized social media and onto federated social software. Arguably there were no tipping points at all in 2021, unless you count the rise of WebAssembly. But there’s a good chance that both generative AI and federated social software will prove to be truly disruptive technologies for the rest of this decade.

One thing that hasn’t changed is the continued resurgence of web technologies. Last year it was Figma’s web-based design tool that impressed me; this year it’s been web-based development tools — a.k.a. “Cloud IDEs.” Even with the nascent metaverse, despite Meta wanting to turn it into the next mobile internet, most of the metaverse technology that stood out this year is web-based.

So let’s get to it. I have drawn on all of the articles I’ve written this year (62 of them!), and also reviewed what I tracked on social media over 2022, to come up with the five technologies below.

If 2021 was the year of Web3, then generative AI was “the new Web3” in 2022. It started with DALL-E 2, which was announced in April and then launched as a private beta in July by OpenAI (the company co-founded by Elon Musk, who is certain to be named TIME’s ‘Person of the Year’ — it sometimes goes to villains, remember). DALL-E 2 is an image generation service powered by deep learning models, and it was a significant step up from the first version released last year. It was opened up to everyone in September, and just last month released as an API.

The first real competition for DALL-E came in July, when a company called Midjourney released its eponymous text-to-image generator.

The AI hype really ramped up in August, though, with the release of Stable Diffusion — another deep learning text-to-image generator. Unlike DALL-E 2 and Midjourney, Stable Diffusion has a permissive licensing structure. The company behind it, Stability AI, stated that it was “released under a Creative ML OpenRAIL-M license” — not fully open source, but it allows for both commercial and non-commercial usage.

We saw a number of variations on generative AI this year, including text-to-video (Runway and Google’s Imagen Video and Phenaki), text-to-3D (Nvidia’s GET3D and Google’s 3DiM), speech-to-text (OpenAI’s Whisper), and of course text-to-code (OpenAI’s Codex, which powers GitHub Copilot). Although Copilot was actually launched last year, this year Microsoft announced that it has become a major part of its developer tooling. Microsoft, which is a major investor in OpenAI, said at this year’s Build conference that GitHub Copilot “today suggests about 35% of the code in popular languages like Java and Python.”

Last but not least, we had OpenAI’s ChatGPT, released this month, which is a chatbot for generative AI.

2. Mastodon and the Fediverse

After the news broke in late April that Elon Musk’s offer to acquire Twitter had been accepted, many Twitter users began to reignite their old Mastodon, Tumblr and other social media accounts. But by the end of the year, there was only one alternative for Twitter: Mastodon.

When Musk finally took over at Twitter in late October, after months of trying to wriggle out of the deal, he immediately made drastic changes. This led to a full-on migration to Mastodon, which continues to this day. The open protocol that underlies Mastodon, ActivityPub, enables it to “federate” with completely different social networks, like Pixelfed (a photo-sharing site) and PeerTube (a YouTube clone). This new open web platform has been nicknamed “the fediverse.”

What’s fascinating about this is that the fediverse represents a return to decentralized social networking, not dissimilar to the first wave of blogging in the early 2000s. While it’s far from certain that this tipping point away from centralized platforms will ultimately spell the end of Twitter, it has made decentralized software attractive again for developers. In the month after Musk took over, Twitter’s developer platform team was decimated (ironically I had written about it the month prior, cautiously optimistic that Twitter was on the right path again with developers). Simply put: there’s nothing left for developers on Twitter, so that leaves a greenfield for the fediverse. Watch this space in 2023!

In September, the internet industry deal of the year happened — Figma, a popular browser-based design tool that I selected as one of my top technologies of 2021, sold to Adobe for about $20 billion. After that, attention shifted to perhaps the final category of productivity tool yet to make a full move to the web: integrated development environments (IDEs).

Later that month, Ivan Burazin, co-founder of a web-based IDE product called Codeanywhere, told me that nearly all external developers will soon use a Cloud IDE. Internal developers will increasingly have the option too, although that will just be a feature of enterprise tools like Microsoft Visual Studio.

I also spoke to Shawn Wang, aka @swyx, Shawn Wang, who told me we are about ten years away from developers dropping desktop files completely — it’ll be “the end of localhost,” he said.

If you’re interested in this trend, check out my interviews with the founders of StackBlitz — “very much the development analogy of what Figma did for design,” according to StackBlitz co-founder Eric Simons — and CodeSandbox.

Mark Zuckerberg’s company continued to dominate discourse about the so-called “metaverse” this year, after its giant pivot and name-change to Meta in October 2021. However, by the end of 2022, there was still little evidence of what Meta’s platform will actually be built with.

By contrast, it was a year of solid progress in the open, web-based metaverse — comprising projects like The Open Metaverse Interoperability Group (OMI), the Metaverse Standards Forum (a Khronos Group initiative), and various Web3-branded virtual worlds (Decentraland, Voxels, Webaverse, and others).

What’s perhaps most interesting about the open metaverse is how it is changing online culture. In June, I chatted with a leading open metaverse developer, Jin. We met in a 3D virtual space in Mozilla Hubs, because Jin is pseudonymous — meaning he hasn’t revealed his real identity online. This, it turns out, is an important characteristic of the open metaverse. According to Jin, “pseudonymous work will be big in the virtual economy, avatars are inherently a privacy-preserving technology.” Pseudonymity also reflects the key influences on Jin and others like him, which include gaming culture, the first wave of online VR headsets (led by Oculus), cryptocurrencies, and “Vtubers” (short for “Virtual YouTubers,” online entertainers who use virtual avatars).

A number of fascinating new metaverse startups and projects arose in 2022, including Croquet and Third Room. Nvidia’s Omniverse, which I chose as one of my top products last year, also made further progress with its toolset. While Meta did make some encouraging noises in October — especially with the announcement of its new Meta Quest Pro VR headset — 2022 proved that the open metaverse will be a viable alternative to Zuckerberg’s vision going forward.

Web3 was arguably the biggest tech story of the year last year; or, as I put it in my annual news roundup, “a rolling ball of hype that gathered momentum over 2021.” However, in 2022 things took a turn for the worse due to a not hard to predict cryptocurrency crash. But even though development on blockchain technologies slowed down as a result, there were still pockets of innovation in Web3. One was the continued progress being made in decentralized storage.

Probably the most impressive of these solutions is the Interplanetary File System (IPFS). As fellow The New Stack writer Jake Ludington noted in September, while normally IPFS is used to host media assets for blockchain apps and NFTs, its utility extends beyond Web3 implementations. “The decentralization built into IPFS is available to any application development and has the potential to change the way web applications are built and scaled,” Ludington wrote. He suggested that developers consider using IPFS instead of sticking with the HTTP stack.

Another interesting project is the almost as grandly-named Internet Computer (ICP), which is something between a blockchain and a decentralized cloud provider. It’s not a storage solution per se, since it is made up of independent data centers that cooperate with each other (like a peer-to-peer file-sharing network). According to an interview I conducted with the organization that runs ICP, developers are able to host an entire application on it — which, it is claimed, obviates the need for a traditional cloud service like AWS.

Arweave and Filecoin are another two solutions worth keeping an eye on. Even the Internet Archive, that modern-day treasure of the web, is actively researching decentralized storage solutions.

This top-5 list is of course entirely subjective, although I promise I did not consult ChatGPT or any other generative AI. If you have other suggestions for best internet technologies of the year, I’d love to hear them — tag me in the fediverse to start a discussion (oh alright, Twitter if you must).

Note: the feature image for this post was generated by Stable Diffusion, with the prompt “generative AI is taking over the internet, but the people are moving to mastodon.”

Richard MacManus is a Senior Editor at The New Stack and writes about web and application development trends. Previously he founded ReadWriteWeb in 2003 and built it into one of the world’s most influential technology news sites. From the early...
Read more from Richard MacManus
SHARE THIS STORY
RELATED STORIES
Angular vs. React: How to Choose the Right Framework for You Prepping for 2023: What's Ahead for Frontend Developers Build Your Own Decentralized Twitter, Part 3: Hello Mastodon Crypto Winter Puts Dampener on Web3 Developer Growth A Leg-endary Year: Top 5 Internet Technology Stories of 2022
TNS owner Insight Partners is an investor in: StackBlitz, The New Stack, Simply.
SHARE THIS STORY
RELATED STORIES
An Inside Look at What GitLab’s Web IDE Offers Developers Beyond Hello World: Startup Gamifies Development Skills Build Your Own Decentralized Twitter, Part 3: Hello Mastodon What It's Like to Run a Mastodon Server in the Musk Twitter Era Learning Storage and Retrieval with a Hash Function
THE NEW STACK UPDATE A newsletter digest of the week’s most important stories & analyses.
The New stack does not sell your information or share it with unaffiliated third parties. By continuing, you agree to our Terms of Use and Privacy Policy.