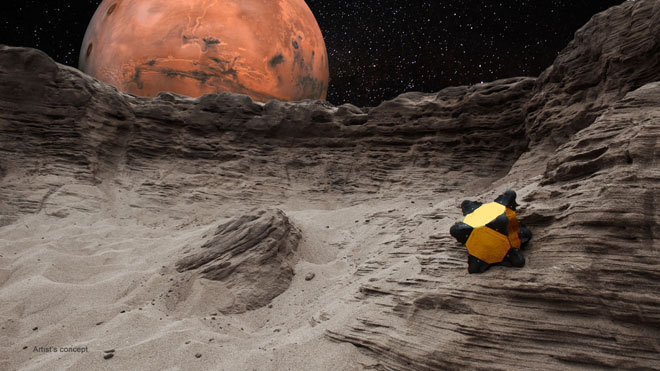 We know how algorithms and machine learning might be used to better detect asteroids zooming in near Earth. But once discovered, exploration on an asteroid or comet surface is difficult, to say in the least, thanks to their low-gravity environments that render conventional rovers ineffective — possibly having them bounce around before floating off into space.

To tackle the problem, engineers from MIT, Stanford and NASA’s Jet Propulsion Laboratory (JPL) have been developing the Hedgehog, a cube-shaped robot specially designed for exploring and moving around the microgravity environments found on asteroids. Its spiky exterior protects its internal flywheels, which allow it to roll, hop and tumble around on any of its symmetrical faces without hampering operations. Check out the Hedgehog in action:

Open How to Explore the Surface of a Comet or Asteroid on YouTube.

Inside the Hedgehog, there are three electrically powered flywheels — one for each orthogonal axis — which spin to propel the Hedgehog in whatever direction it needs to go. Its movements can be controlled somewhat by using the flywheels’ brakes, generating enough torque to alter its “hopping angle” and overall trajectory. Power would be supplied via batteries or exterior solar panels.

Marco Pavone of Stanford explains on IEEE Spectrum how the design of the humble-looking Hedgehog was driven not by the “cool factor,” but by scientific requirements. After some research, the team found that the cube was best for optimal hopping, says Pavone:

“Over the past 10 years or so, there’s been increasing interest in exploring small bodies—asteroids, comets, anything that’s smaller than a planet. We’ve spent quite a bit of time with scientists at JPL trying to understand what you need for that. The figures that came back from the scientists were that in general, you want to be controllable within 20 percent: if you want to move to a spot 10 meters away, you should be able to get there within 2 meters. Small bodies have surfaces that are heterogeneous, but within small patches, they’re homogenous, so you don’t need exact precision, although you need some sort of control. With that in mind, we designed this robot.” 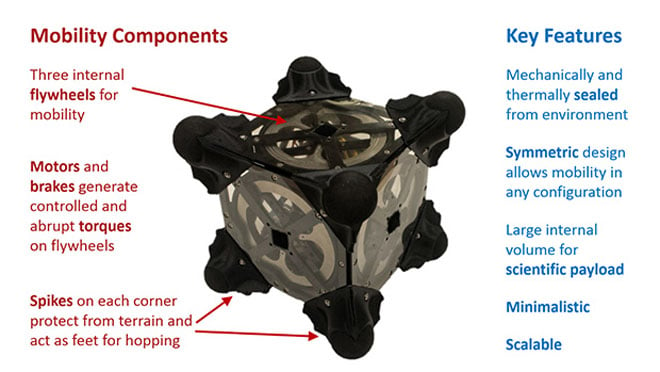 The Hedgehog’s design allows for a number of moves that help it get around on the difficult terrain that might be expected on a small celestial body hurtling through space. Its simplest maneuver is a yaw-like motion, where it turns in place. It can cover long distances with a series of hops on one or two of its spikes, or tumbling by revolving on its six faces. The most impressive stunt it can pull off is a tornado-like move, where it can quickly spin to launch itself into the air, freeing it from things like sinkholes or sandy, slippery and even crumbly spots. 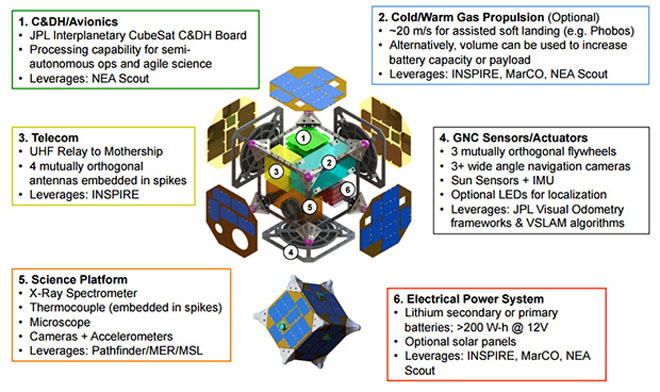 So far, the team has created two distinct Hedgehog prototypes — one from Stanford and one from JPL — each with slightly different weights and methods of braking. The JPL Hedgehog prototype weighs about 11 pounds (5 kilograms) and uses disc brakes, while the Stanford model is a bit lighter and uses friction belt brakes. When loaded with scientific instruments, the cube will probably weigh about 20 pounds, but this would be less of a concern in a low-gravity environment. Both have internal flywheels and protective spikes at the vertices to move around in a similar fashion. Both were put to the test over the summer in a series of parabolic flights on NASA’s C-9 aircraft, to compare the models’ performance in simulated, low-gravity conditions.

The team is now working on giving the Hedgehog improved processing capabilities for semi-autonomous operations and quicker adaptability. In addition to its innovative way of getting around, the Hedgehog will be a much cheaper alternative to traditional space rovers, meaning that it can be scaled up for massive deployment all over the solar system from a central mothership that would control their movements and relay data back to Earth. So far, the Hedgehog looks like a promising candidate for helping us explore these elusive “time capsules” of the solar system. More over at NASA.