This milestone year offered a chance for reflection, and the EFF founders got candid in a conversation about social media, the changing role of government, and more.
Aug 11th, 2021 9:32am by David Cassel 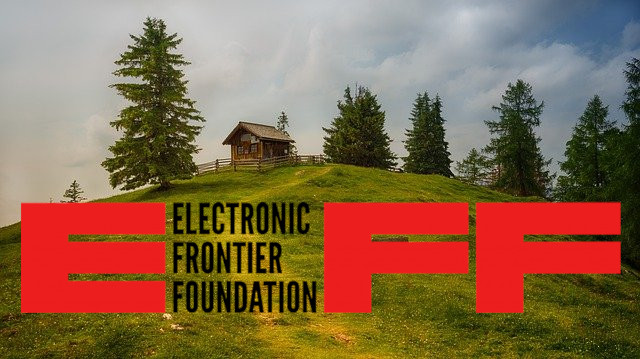 Electronic Frontier Foundation celebrated its 30th anniversary this month by webcasting an hour-long discussion between three of its founders. The conversation began with a look back at the group’s beginnings — but soon turned to a hard and honest appraisal of where things stand today. Was the future different than they’d imagined? This milestone year offered a chance for reflection, and the EFF founders’ surprisingly candid answers didn’t disappoint.

The discussion was moderated by EFF Executive Director Cindy Cohn (who has also been the group’s legal director and general counsel for 15 years). Cohn began by recalling the early support EFF received from Apple co-founder Steve Wozniak, who she said “recently affirmed to us how proud he was of that early support, and how important it was going to be to have EFF strong and in the corner of the tinkerers and the modders and the repairers, especially as we head deeper into the digital age.”

Cohn added proudly that 71-year-old Wozniak is still fighting for that cause in a recent video on the right to repair, adding that it exemplified “the spirit of the early internet.”

Another creator who’d led crucial support was Mitch Kapor, the founder of Lotus, an EFF co-founder (and later founding chair of the Mozilla Foundation) now pushing for social change with his Kapor Capital investment firm, The Kapor Center, and the nonprofit SMASH, which seeks to increase the underrepresented in STEM industries.

Kapor began his appearance by acknowledging that the spirit of the late John Perry Barlow, one of EFF’s original founders, which loomed heavily over this entire event — and asked for a moment to just add how much he missed him, “and how utterly instrumental he was in EFF.”

Cohn asked the other founders for their memories of how it all began, with Kapor suggesting that in some ways, the story really begins on The Well, an early virtual community founded by Stewart Brand. The Well had joined with Harper’s magazine to host an online conference of hackers, and it was there, Kapor said, that Barlow had first met some teenaged hackers, “who were kids, explorers, getting away with what they could get away with. But it left an impression on him — and it started a dialogue.”

Soon thereafter, Barlow was visited by the FBI, “because somebody had gone dumpster diving, and retrieved a small amount of source code for the Apple Macintosh, and they had sent copies of it to a number of people, including John,” Kapor recalled. Barlow wrote an article about it, which Kapor read, and thought “Oh my God, I had the same frightening experience — these two agents showed up at my door one day, demanding to speak to me… That was the link between John and me.”

But they’d also seen a bigger picture. “We saw new things going on online, law enforcement starting to step in, unfortunately pretty clueless,” Kapor said. “And then the arrests started to happen. The Secret Service was busting people, and it was discussed on the Well at some length. And it troubled me a lot.” The stakes had become very real when they saw real people being convicted of felonies and sent to prison.

Looking back now, it was a seminal event, recalled EFF co-founder John Gilmore, a co-founder of Cygnus Solutions (also the fifth employee of Sun Microsystems, and a frequent contributor to open source software). Gilmore said that he’d soon offered to send money and recruit supporters. He recalls sending an email to Sun Microsystems (which he’d recently re-read) calling it not just a legal issue, but an example of the messy way society and computers interact, meeting on a new frontier where the law wasn’t well understood.

After one fruitful meeting between Kapor, Barlow and Gilmore, “that was the birth of the EFF,” Kapor said. “It was originally to make sure that injustice was not done to some of these kids who were exploring around… It quickly spun into understanding there was a collision going on between the advance of technology, and the slow turning of the gears of government. And we realized this was a civil liberty of our time, to extend the Bill of Rights into cyberspace.”

The third co-founder on the call was Esther Dyson, an influential angel investor and journalist, author, businesswoman and philanthropist (and now the executive founder at the health nonprofit Wellville). Dyson was intrigued by the new organization, and ended up on its board of directors, eventually becoming its chairman of the board.

But soon the discussion had turned to the inevitable follow-up question: Where are we today?

“We certainly freed up encryption,” Cohn pointed out. “If the government had its way in the ’90s, none of us would be doing any of this work over encrypted channels. We really did shift the dynamic there… And the free speech fights are more complicated now — but they’re still there, in the primary way that we started talking about them.”

But Dyson noted new challenges from a force we didn’t have in the 1990s: massively popular social media platforms. “We have the DNA of the internet confronting the metabolism of the always-hungry, never-enough, exponential-growth mindset of these companies, who simply are focused on creating wealth and selling things.”

“These platforms are getting really good at understanding addiction. And at what point are you kind of infringing on someone’s free will if you basically understand them so well that you get them to do things they regret all the time?”

This new platform-dominated world, Cohn said, has forced EFF to think about issues like interoperability and the ability to compete. “It’s something that we’ve just created in the last few years, because we felt like if we couldn’t address that problem, we couldn’t address the privacy problems and the civil liberties problems and the speech problems that are coming as a result of the hegemony of the big companies.”

But Dyson added “one other thing that is really scary: These platforms are getting really good at understanding addiction. And at what point are you kind of infringing on someone’s free will if you basically understand them so well that you get them to do things they regret all the time?”

Kapor called out social media platforms for “the abuses of corporate power, the amplification of misinformation and hatred because it serves the business models of these companies. It’s harmful to the health and safety of large numbers of people in this country, who have every right to feel safe.”

But what’s the solution? This gets into political issues, Kapor acknowledged, and “gets into the zone that rights organizations have always tried to avoid.” However, he added, “I think it’s unavoidable.” And this led him to a spontaneous moment of reflection about the early days of EFF that tied it all together.

“If I could replay the history of EFF, and where I feel like I could’ve done a much better job, is in the early days the liberals and the libertarians came together on the issue of digital civil liberties, and we were very effective,” he said.

“But there was a kind of resistance in the organization — and I was in the minority —about feeling that government had a constructive role to play, needed to play a constructive role in securing freedom and liberty and safety. The DNA was very heavily set in favor of a minimal role for government. I was unable to marshall the resources and arguments — or maybe just it wasn’t the right time.”

Kapor added, “The reason I mention that now is I think there’s a similar moment. And there are choices to be made, and I think it’s important to make the right set of choices.”

Gilmore offered his own perspective. “I understand Mitch’s concern on not finding a constructive role for government. But when government was looking clueless about our internet, of course, a reasonable response is to try to minimize the influence they have.”

He’s still critical of some government positions today — for example, on their desire to bypass encryption — and cited the old saying that it’s hard for someone to understand your point of view when his job depends on his not understanding you. Gilmore said he is glad EFF is around to advocate on these issues, “and I think we have a long role coming in the future. There’s not a clear answer to any of these.”

What’s ahead for the internet? Kapor encouraged people to cast their gaze beyond just technology to the larger good of society. “The more I see what has actually happened with the internet, the more I think it is a function of the dysfunction of capitalism.”

Elaborating on the theme, Dyson pointed out that while we carefully train our artificial intelligence systems, “We forget to train our children.” She added, “I work in some of the poorer communities of this country, and half the children are growing up underfed, underloved, undereducated. They’re damaged by the time they become 10 years old. We can’t build a society with that amount of inequity, that amount of damage. ”

Another crucial need she sees: our basic technical infrastructure. “All over this county, it’s hard to get online… There may be this world of abundance for a few people, but there’s a lot of people missing out. And the costs are being borne by society. They’re being borne by those individuals, but they’re also being borne by everybody else, and we need to start thinking both longer-term and more broadly about the communities around us. Because they are all interconnected.”

This all led Cohn to conclude that going forward, government will have a role in many crucial issues, from privacy to broadband access, as well as network neutrality and protecting competition for innovators. So looking at the issues of today (including copyright) and ahead to the issues of tomorrow (antitrust legislation and patents), Cohn told the audience that EFF “has led the charge for privacy, free expression, and innovation for the past 30 years. We’re just getting started…

“If you think that it’s important to have EFF out there standing strong for your rights and the rights of people who have no voice online, please join us. We work for tips, and we stand on the shoulders of giants.”