The objective of this tutorial is to help you understand how to configure blue/green deployment of microservices running in Kubernetes with Istio. You don’t need to have any prerequisites to explore this scenario except a basic idea of deploying pods and services in Kubernetes. We will configure everything from Minikube to Istio to the sample application.
Oct 19th, 2018 8:34am by Janakiram MSV 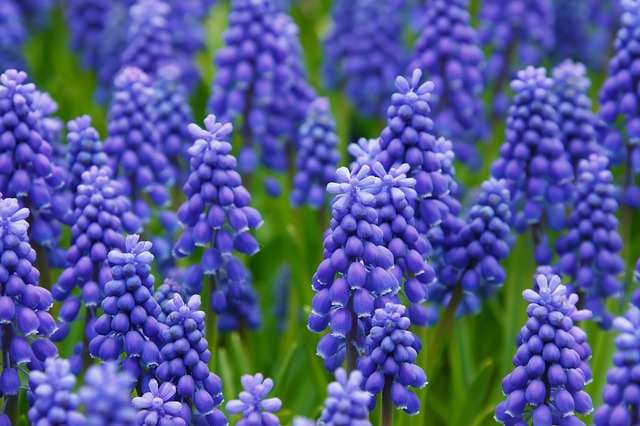 Istio is a service mesh designed to make communication among microservices reliable, transparent, and secure. Istio intercepts the external and internal traffic targeting the services deployed in container platforms such as Kubernetes.

Though Istio is capable of many things including secure service-to-service communication, automated logging of metrics, enforcing a policy for access controls, rate limits, and quotas, we will focus exclusively on the traffic management features.

Istio lets DevOps teams build deployment strategies and create rules to intelligently route the traffic to internal services. It is extremely simple to configure service-level properties like circuit breakers, timeouts, and retries, to set up a variety of deployment patterns including blue/green deployments and canary rollouts.

The objective of this tutorial is to help you understand how to configure blue/green deployment of microservices running in Kubernetes with Istio. You don’t need to have any prerequisites to explore this scenario except a basic idea of deploying pods and services in Kubernetes. We will configure everything from Minikube to Istio to the sample application.

There are four steps to this tutorial – Installing Minikube, Installing and verifying Istio, deploying two versions of the same app, and finally configuring the services for blue/green deployments. We will use two simple, pre-built container images that represent blue (V1) and green (V2) releases.

To minimize the dependencies, we will use Minikube as the testbed for our setup. Since we need a custom configuration of Minikube, start by deleting the existing setup and restarting the cluster with additional parameters.

We need at least 8GB of RAM and 4 core CPU to run Istio on Minikube. Wait for the cluster to start.

With Kubernetes up and running, it’s time for us to install Istio. Follow the below steps to configure it.

You will find a folder, istio-1.0.2, in the same directory where you ran the above command. Add the location istio-1.0.2/bin to the PATH variable to make it easy to access Istio binaries.

Since we are running Istio with Minikube, we need to make one change before going ahead with the next step – changing the Ingress Gateway service from type LoadBalancer to NodePort.

Open the file istio-1.0.2/install/kubernetes/istio-demo.yaml, search for LoadBalancer and replace it with NodePort. 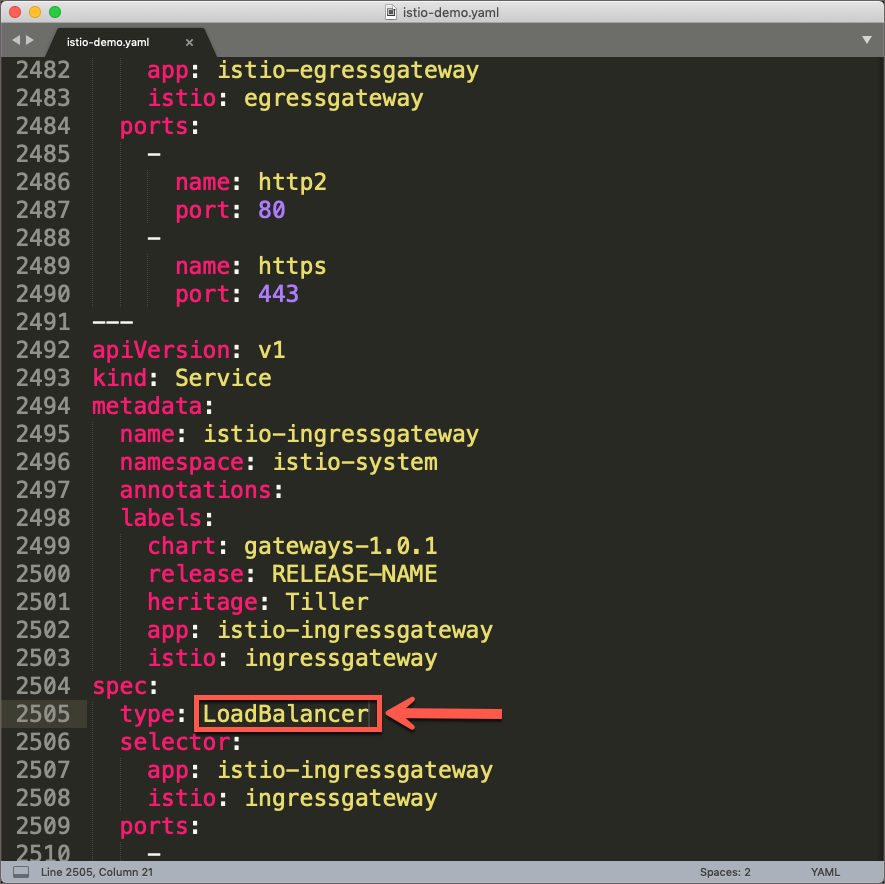 Istio comes with many Custom Resource Definitions (CRD) for Kubernetes. They help us manipulate virtual services, rules, gateways, and other Istio-specific objects from kubectl. Let’s install the CRDs before deploying the actual service mesh.

The above step results in the creation of a new namespace – istio-system – under which multiple objects get deployed. 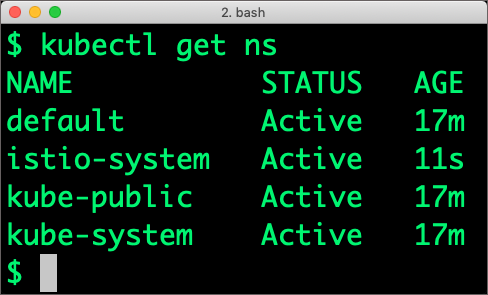 We will notice multiple services created within the istio-system namespace. 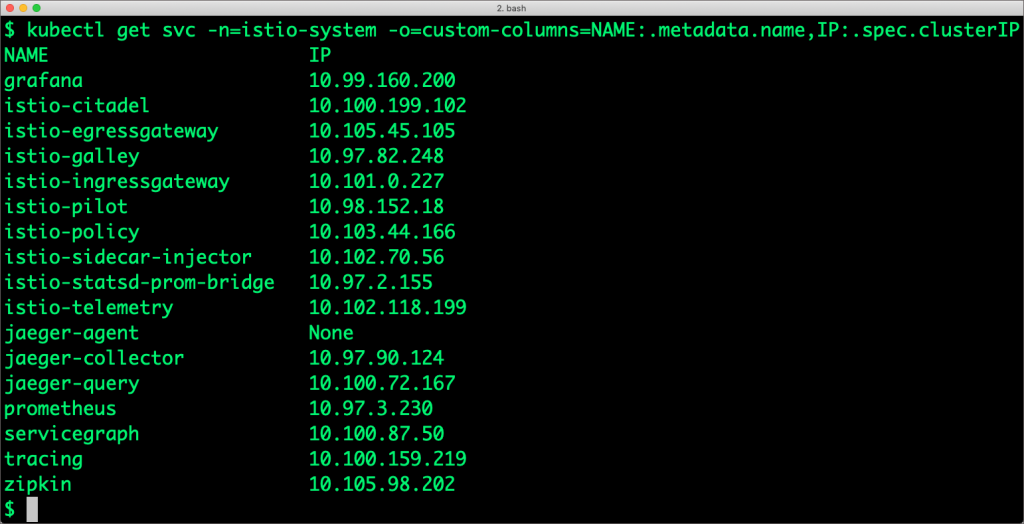 After a few minutes, you will see multiple pods deployed by Istio. Verify this by running kubectl get pods -n=istio-system.

All the pods must be in running or complete mode, which indicates that Istio is successfully installed and configured.

Now, we are ready to deploy and configure services for the blue/green pattern.

To represent two different versions of the applications, I have built simple Nginx-based Docker images – janakiramm/myapp:v1 and janakiramm/myapp:v2. When deployed, they show a static page with a blue or green background. We will use these images for the tutorial.

Let’s start by creating a YAML file that defines the deployments for V1 and V2 along with a ClusterIP that exposes them. Notice the labels used for identifying the pods – app and version. While the app name remains the same the version is different between the two deployments.

This is expected by Istio to treat them as a single app but to differentiate them based on the version.

Same is the case with the ClusterIP service definition. Due the label, app: myapp, it is associated with the pods from both the deployments based on different versions.

Before configuring Istio routing, let’s check out the versions of our app. We can port-forward the deployments to access the pods.

To access V1 of the app, run the below command and hit localhost:8080. Hit CTRL+C when you are done. 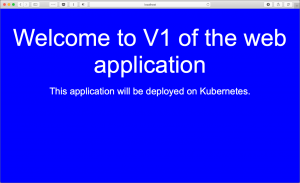 For V2, run the below command and hit localhost:8081. Hit CTRL+C when you are done. 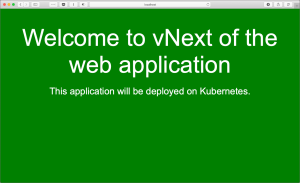 Our goal is to drive the traffic selectively to one of the deployments with no downtime. To achieve this, we need to tell Istio to route the traffic based on the weights.

There are three objects involved in making this happen:

An Istio Gateway describes a load balancer operating at the edge of the mesh receiving incoming or outgoing HTTP/TCP connections. The specification describes a set of ports that should be exposed, the type of protocol to use, SNI configuration for the load balancer, etc. In the below definition, we are pointing the gateway to the default Ingress Gateway created by Istio during the installation.

Let’s create the gateway as a Kubernetes object.

An Istio DestinationRule defines policies that apply to traffic intended for a service after routing has occurred. Notice how the rule is declared based on the labels defined in the original Kubernetes deployment.

A VirtualService defines a set of traffic routing rules to apply when a host is addressed. Each routing rule defines matching criteria for traffic of a specific protocol. If the traffic is matched, then it is sent to a named destination service based on a version.

In the below definition, we are declaring the weights as 50 for both v1 and v2, which means the traffic will be evenly distributed.

You can define all the above in one YAML file that can be used from kubectl. This YAML file is available as Github Gist.

Now, let’s go ahead and access the service. Since we are using Minikube with NodePort, we need to get the exact port on which the Ingress Gateway is running.

Run the below commands to access the Ingress Host (Minikube) and Ingress port.

If you access the URI from the browser, you will see the traffic getting routed evenly between blue and green pages. 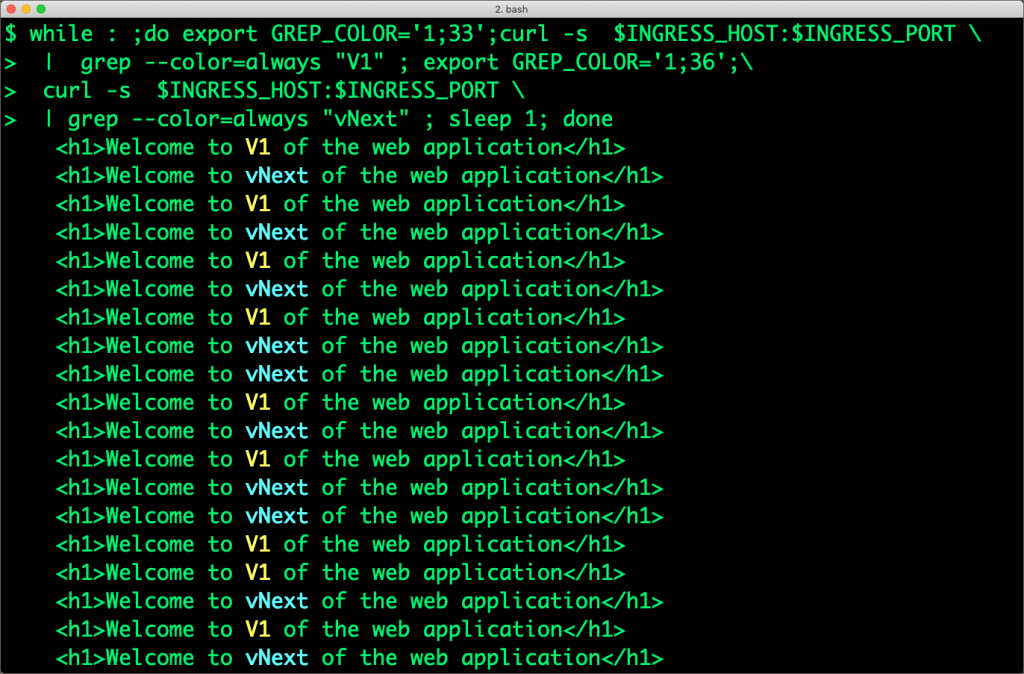 While the above command is running in a loop, let’s go back to the app-gateway.yaml file to adjust the weights. Set the weight of V1 to 0 and V2 to 100.

Submit the new definition to Istio.

Immediately after updating the weights, V2 will get 100 percent of the traffic. This is visible from the output of the first terminal window. 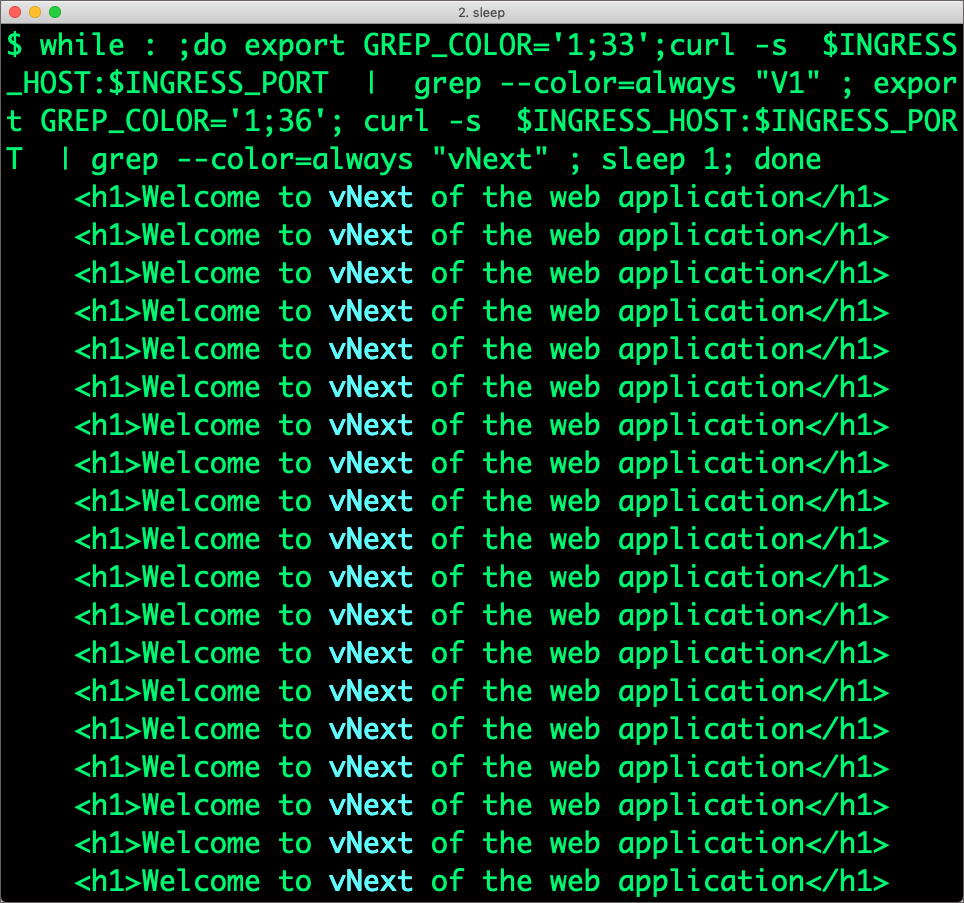 You can continue to adjust the weights and watch the traffic getting rerouted dynamically without incurring any downtime.

Traffic management is only one of the features of Istio. In the upcoming articles, we will explore other capabilities of Istio.

SHARE THIS STORY
RELATED STORIES
4 Ways to Use Kernel Security Features for Process Monitoring MicroK8s and Portainer Is The Easiest Way to Deploy an Application on Kubernetes Kubernetes for Windows Testkube Moves to the Cloud in Beta Release A Look at Kubernetes Deployment
TNS owner Insight Partners is an investor in: Docker.
SHARE THIS STORY
RELATED STORIES
What Is the Docker .env File and How Do You Use It? Kubernetes Needs to Take a Lesson from Portainer on Ease-of-Use Kinsing Malware Targets Kubernetes Kubernetes 101: Deploy Portainer to a MicroK8s Cluster Kubernetes for Windows
THE NEW STACK UPDATE A newsletter digest of the week’s most important stories & analyses.
The New stack does not sell your information or share it with unaffiliated third parties. By continuing, you agree to our Terms of Use and Privacy Policy.