The long process of installing Linux MInt on a Dell laptop through a USB stick.
Sep 24th, 2019 12:00pm by David Cassel 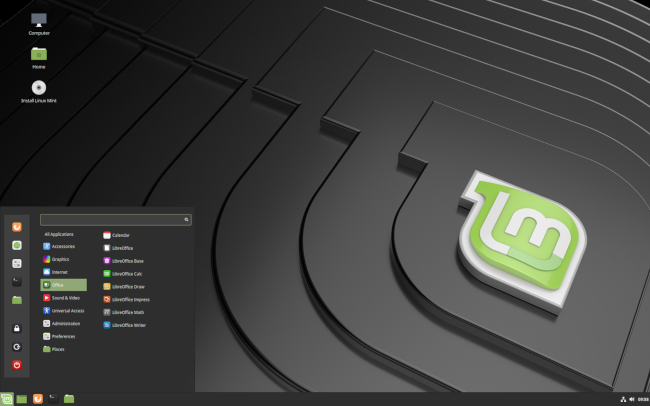 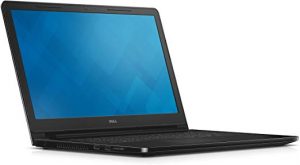 How hard would it be to convert it into a Linux laptop?

After some research, I’d thought I’d discovered the perfect distribution: Linux Mint. The line in the user guide that really intrigued me was its promise of “a fully-functional operating system which you can try without affecting your PC.” Everything stays on the USB stick.

So I set about following the Installation Guide’s download instructions. Along the way, I documented every step, creating a step-by-step tutorial of how to make it all happen, and capturing all the new and interesting things I’ve learned, since in a way it’s not just a change of operating systems, but a change of cultures. What exactly happens when you move from a consumer-oriented technology, and try to cross over to the Linux-y world of open source, and a whole new ecosystem of free software? Or, to put it another way, what happens when an installation newbie confronts the details and nuances of a more technical world?

Looking back, I was hoping it’d be easier, and I very nearly gave up. But somehow I kept being pulled forward by the call of open source Linux…

The first surprise? After downloading the distribution’s 1.8GB ISO file, I discovered that the installation instructions included one step that I wasn’t expecting: “Verify your ISO image.”

Downloads Must Be Verified

The user guide explains that if the download caused problems with the ISO file, “you will experience weird bugs and will have a lot of trouble finding help.” The good news? The integrity of the download is easily verified using the SHA256 checksum. The bad news? The easy command-line check is a Linux utility, and I was still using a Windows system.

Fortunately, I found a work-around. Two of them, actually. The installation guide includes a link to a detailed forum post explaining how to verify the ISO image on a Windows machine. But then I realized there’s an even easier way. I’ve already installed the Windows Subsystem for Linux on my laptop. So I could just fire up a Bash window, and run its built-in sha256sum utility.

I confirmed that it printed out the number specified in the sha256sum.txt file I’d downloaded along with the ISO file. But wait! Now there’s also an additional step to verify the authenticity of that file — and it involves another set of tools. First I use the WSL’s built-in gpg command to import the Linux Mint signing key — and then run it with the –verify flag to make sure I get the appropriate “fingerprint”.

I then get two seemingly-conflicting messages.

But the installation guide assures me that if the fingerprints match, I’m good to go. “GPG might warn you that the Linux Mint signature is not trusted by your computer. This is expected and perfectly normal.”

The next step is “Create the bootable media.” Though it turns out I wasn’t through with downloading things yet. I’ve got my USB stick, and I’ve got an ISO image ready to install on it, but apparently the next step is “Download Etcher” to properly configure that USB stick with that ISO image.

So, another large download — the file size was 139MB and took nearly 20 minutes…

I was surprised how easy it was to use Etcher though — but if you’re trying this at home, don’t do what I did. Full of enthusiasm, I’d moved the ISO file onto the USB stick that I’d planned on using to install Linux. But Etcher didn’t seem to like that — since it was planning to write to that same drive to create the bootable media. So I moved the ISO file from the USB stick back onto my hard drive, and Etcher was able to proceed, creating the bootable media in three easy steps. 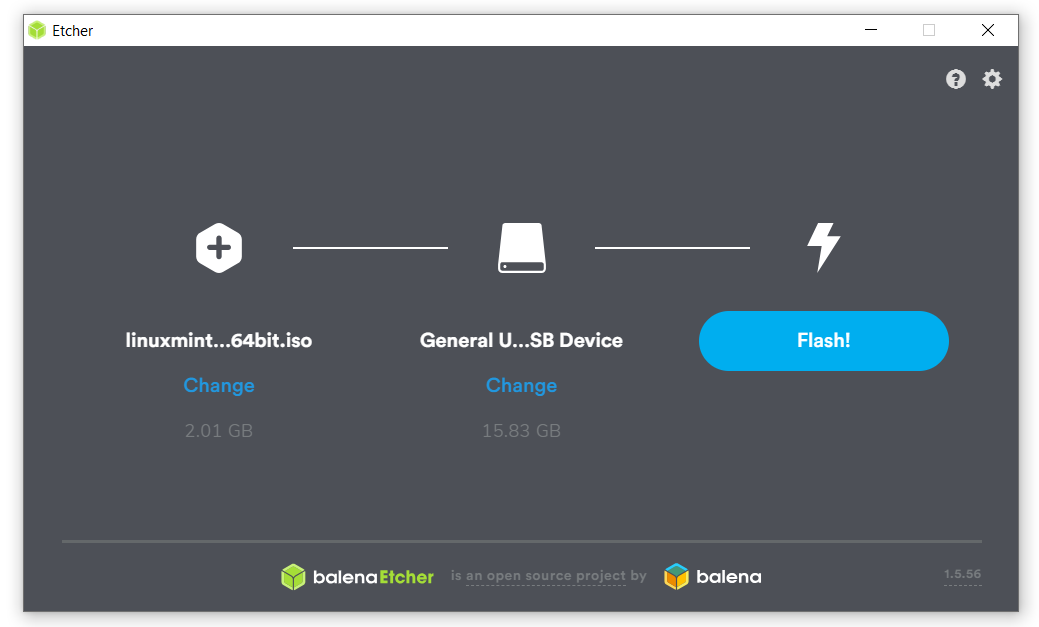 Interestingly, the USB stick was now nearly full. (All for a single directory named efi.)

At this point, I was a little nervous, since the next step moved from the “preparation” phase to actually booting up Linux for the first time…

Things No One Tells You

There are two ways to get into the BIOS menus on my laptop. One is to hit F2 when the system is restarting. But there’s also another easier alternate method. I pulled up the Settings for Windows 10 and worked my way to “Recovery,” where one of the choices is Restart Now. Fortunately, clicking that button doesn’t actually restart now. It first offers several choices on how to start up.

I dig my way down to Troubleshoot / Advanced options / See More Recovery Settings / Advanced Options / UEFI Firmware Settings. There’s only one choice there — “restarting to change UEFI firmware settings” — but the web page at Dell.com assures me that this will get me into the UEFI (BIOS) screen — and it does.

It’s possibly the world’s ugliest interface. It’s a sparse grey rectangle with words written in mostly black letters — though a few are in white or blue. There’s menus across the top — Main, Advanced, Security, and… Boot.

Unfortunately, I can’t seem to find a choice for booting from my USB stick and discover that I’ve stumbled into one of those things that no one ever tells you about. I ended up restarting my laptop several times, trying various tricks from Google search results to summon Linux off my USB stick. Eventually, I found a web page warning me about Windows’ “controversial secure boot.” Sure enough, under the Boot menu, there’s a choice called “Secure Boot” — and I tried selecting “Disabled.”

So the next time I restarted my laptop, it seemed like the menu choices were different. One of them even offered to toggle a choice letting me “Use a device / removable drive.” Well, that was easy.

Or was it? My laptop still booted just like it did before — into Windows again.

My battery was getting low — but eventually, I found the right path. Under the Boot menu, the third choice was “File Browser Add Boot Option.” I’m not quite sure how to parse those words, but selecting it gave me a helpful new menu named “Select Media Driver” with three choices.

Now we’re talking! I choose that last choice, and get another menu.

I select <efi> and get another three-choice menu.

I choose bootx64.efi, and it asks for a file name. I call it TRYING_TO_BOOT, and am given a blue menu titled “SUCCESS.”

But just creating an option doesn’t actually select it. A comment on a forum in Dell’s “Community” site suggested I look for a menu named “UEFI Boot choice.”

Now we’re finally getting somewhere. And this time when I start up my laptop, I do not get carried off into Windows 10. Instead, there’s a screen labeled GNU GRUB version 2.02, with four choices.

The Black Screen of Doom

There’s a black screen and a dramatic pause. Some white-lettered words appear in the upper-left but disappear before I can read them. The screen turns solid black again.

And then it stays black.

Several minutes go by. Maybe I need to press a button?

I get impatient and press the power key. I get to the same menu, and select the first choice again, returning to a black screen.

Instead of just selecting “Start Linux Mint 19.2 Cinnamon 64-bit,” I highlight that choice and then press “e” to edit the command.

But fortunately, Googling that reveals that I’m not the only one. There’s actually a post on the forum for Linux Mint titled “Black screen after booting Mint19.” Apparently this is a known issue.

There’s even a whole section dedicated to it on a page that’s linked from the Linux Mint Installation Guide, though it doesn’t appear until after the “Post-Installation” section, under a link titled “Boot Options” in the “Troubleshooting” section.

But it does solve my black screen of doom problem.

Instead of just selecting “Start Linux Mint 19.2 Cinnamon 64-bit,” I highlight that choice and then press “e” to edit the command. This allows editing of the parameters, and the fix involves replacing the phrase quiet splash with nomodeset. Apparently it’s an issue with the drivers, which can be easily fixed once the system boots up.

Typing Cntrl-X (or pressing F10) continues the bootup process. And this was the moment I’d been waiting for.

And soon my laptop was booting up into an entirely new desktop environment, shining up from my laptop in all its glory.

SHARE THIS STORY
RELATED STORIES
9 Supply Chain Security Best Practices Creating ‘Offline-First’ Applications for Wi-Fi Dead Zones Making It Easier to Build Apps with Time Series Data Performance Measured: How Good Is Your WebAssembly? 4 Supply Chain Security Threats and How to Handle Them
SHARE THIS STORY
RELATED STORIES
Edge Computing vs. Cloud Computing Why the Edge for Applications Is a Trend Heading into 2023 Livin’ Kubernetes on the (Immutable) Edge with Kairos Project Creating ‘Offline-First’ Applications for Wi-Fi Dead Zones How New Sony AI Chip Turns Video into Real-Time Retail Data
THE NEW STACK UPDATE A newsletter digest of the week’s most important stories & analyses.
The New stack does not sell your information or share it with unaffiliated third parties. By continuing, you agree to our Terms of Use and Privacy Policy.