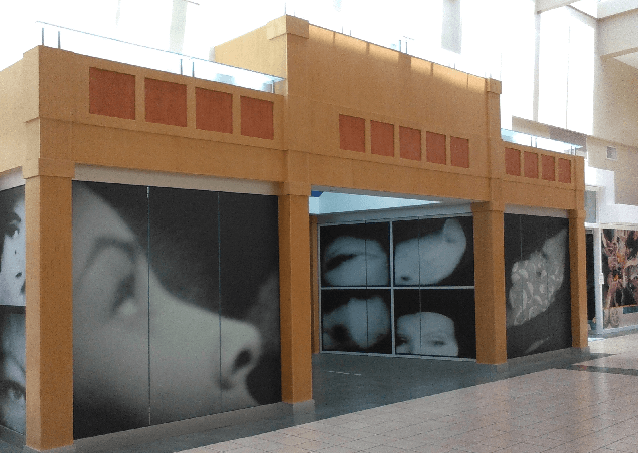 They’re all still photos from classic movies from the Golden Age of Hollywood, but these photographs were taken from a television broadcast using an iPhone, giving them a ghostly softness as the mall’s floor tiles and food court tables suddenly yield to a glimpse of Hollywood glamour. It’s a surprisingly poignant tribute to the mother of the photographer, Tama Hochbaum, and, according to her website, a study on the passage of time. Hochbaum saw this approach as a way of tracing that glorious old visual medium as a kind of legacy from her late mother, who died in 2012. She was apparently very fond of classic Hollywood movies.

Over the next three years, 63-year-old Hochbaum watched TV broadcasts of the movies that her mother had loved —  and took photos of them with her iPhone for a 2015 book called “Silver Screen.” Then six months ago, some of those photographs made a magical leap into the real world — as a wall-sized art installation at her local shopping mall. The publisher of Hochbaum’s book was asked to curate a special installation around the mall to celebrate its new high-end movie theater, the Silverspot Cinema, when it opened in October. And now noir-ish photos from The Third Man grace the windows and doorway opposite Alfredo’s Pizza Villa. 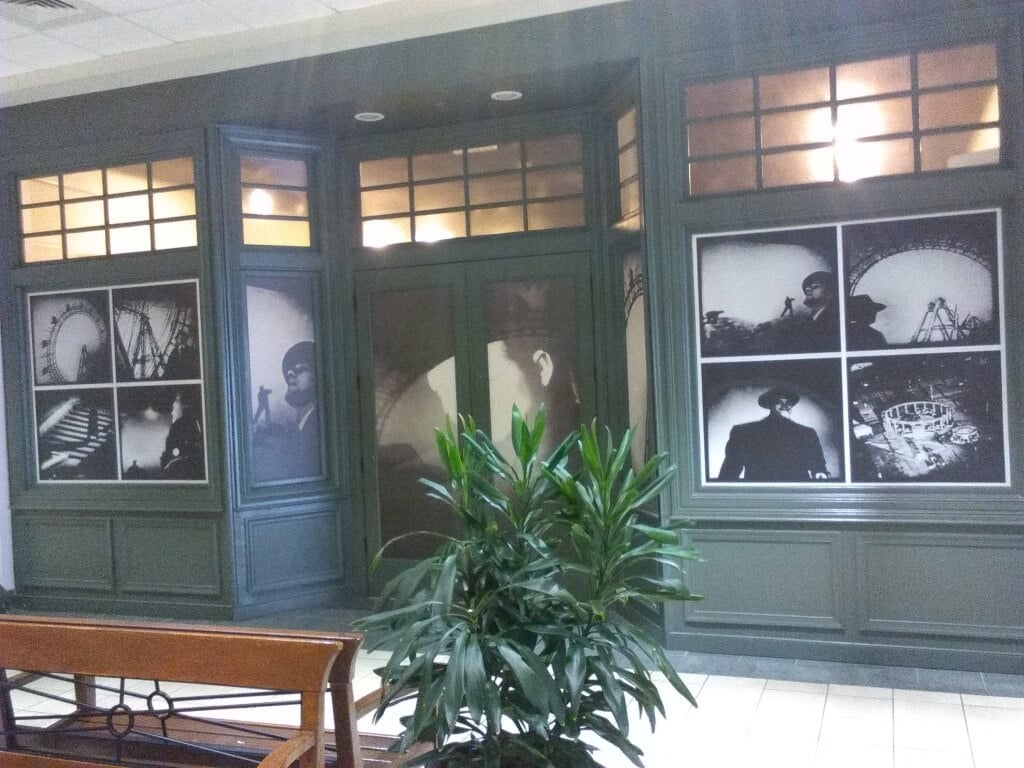 Orson Welles’ face is split across the two doors — that surprising moment when he makes his first appearance in the movie as the mysterious Harry Lyme. There are shadows on a staircase, a distant Ferris wheel, and the smoke from a freight train.

Further into the mall, another set of windows features rectangular prints with close-ups of Greta Garbo, Lillian Gish, Joan Crawford, Ingrid Bergman, and Lauren Bacall — each photograph taken from a TV broadcast by Tama Hochbaum’s iPhone. The installation was cherry-picked from that larger collection Hochbaum describes as “a generational blend of visual technologies…celluloid of my mother’s generation, digitized for broadcast on TV, the technology of my coming of age, shot with the ever-present iPhone of my daughter’s generation.”

Other artists have also explored iPhone photos as an artistic medium, but Hochbaum is using them to explore a larger ongoing theme throughout her work.

“From my earliest days as an artist I have been interested in the manifestation of the passage of time,” her website explained. She tells the story of how she created her first artistic work by etching her grandparents (and her father as a young child) into a New England landscape with columns from an early 20th-century photographers studio, as a way of depicting the passage of time. And it’s this same theme that ultimately led her to photograph TV broadcasts of movies with an iPhone for her 2015 book. “The cinematic quality of these images of the stars of the golden age of movie-making, both in and out of focus, along with the design of many pages of the book in sequential gridded format, produce the sensation of watching time pass.”

Remember when Bette Davis danced with Henry Fonda in her scandalous red dress in 1938’s Jezebel? That scene — and its empty ballroom floor — now plays out silently next to one of the mall’s planters. 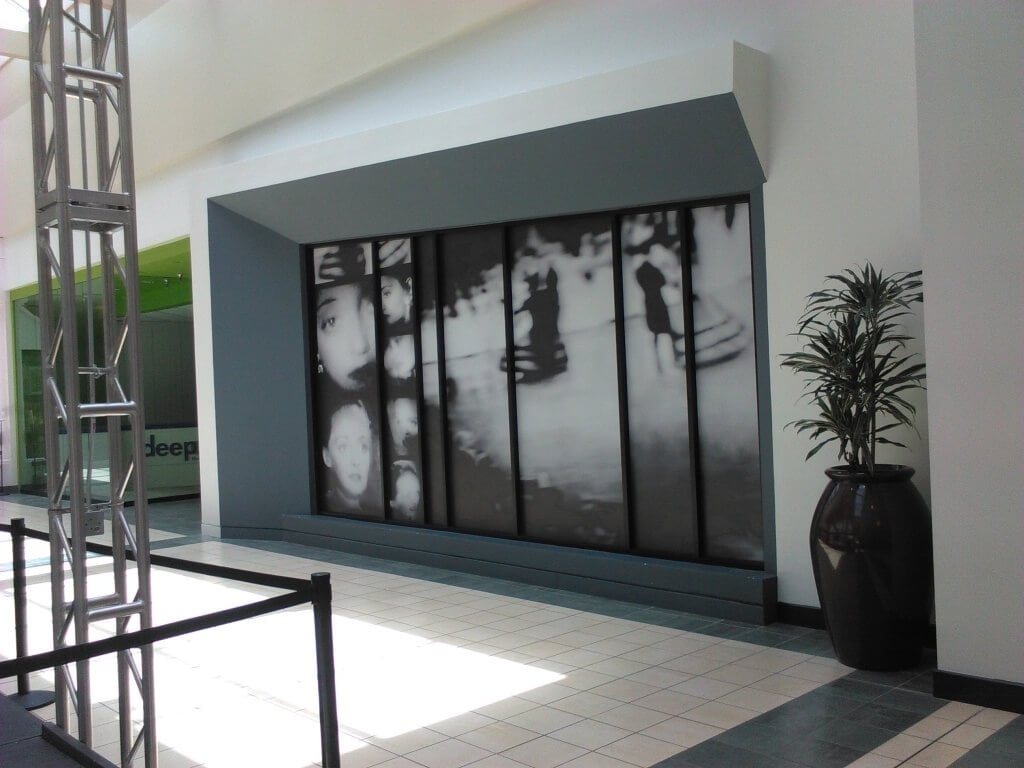 And at the mall’s far end, that incredible tap-dancing duo, The Nicholas Brothers, are now frozen in mid-leap — caught in the middle of an acrobatic dance number in a series of two dozen different iPhone photos. 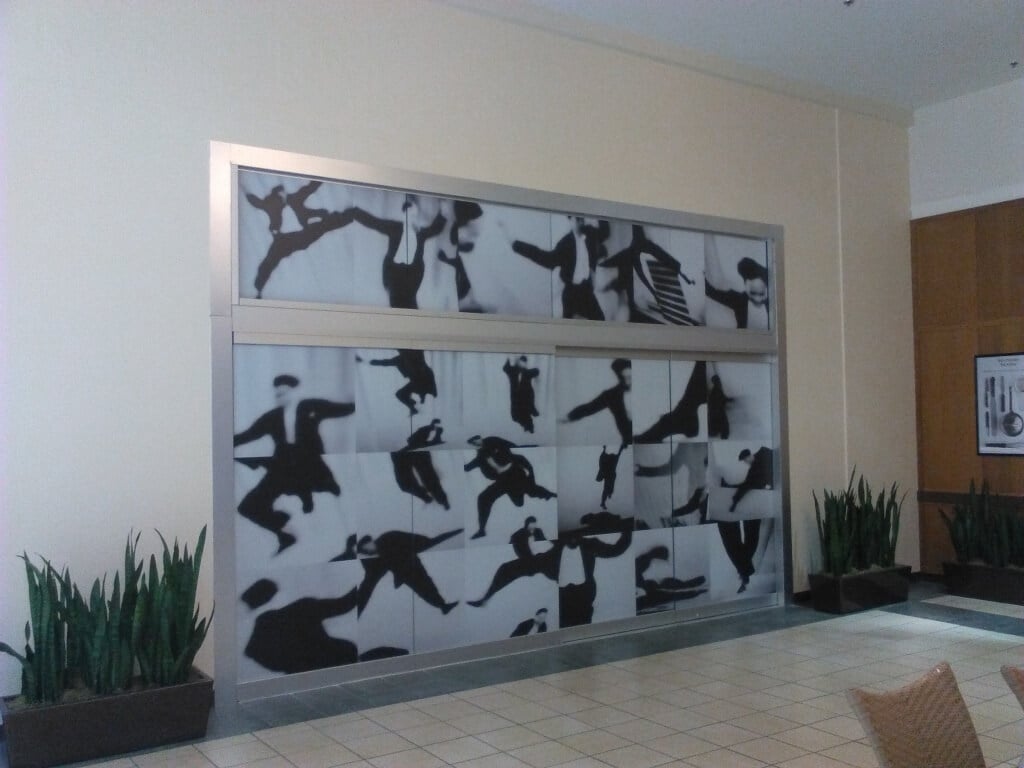 Envisioning the installation, generating the prints, and installing the photographs took a full two and a half weeks, according to Hochbaum’s blog. So now just beyond a restaurant’s plastic table stands a wall-sized photograph of Fred Astaire approaching Ginger Rogers. Both actors have their back turned, and the washed-out, colorless photo looks almost forlorn. That particular iPhone photo is from “Top Hat,” and a montage past the next pillar presents a jangly montage of photos of Astaire in action. As I walked by, I snapped some pictures using my Android smartphone. 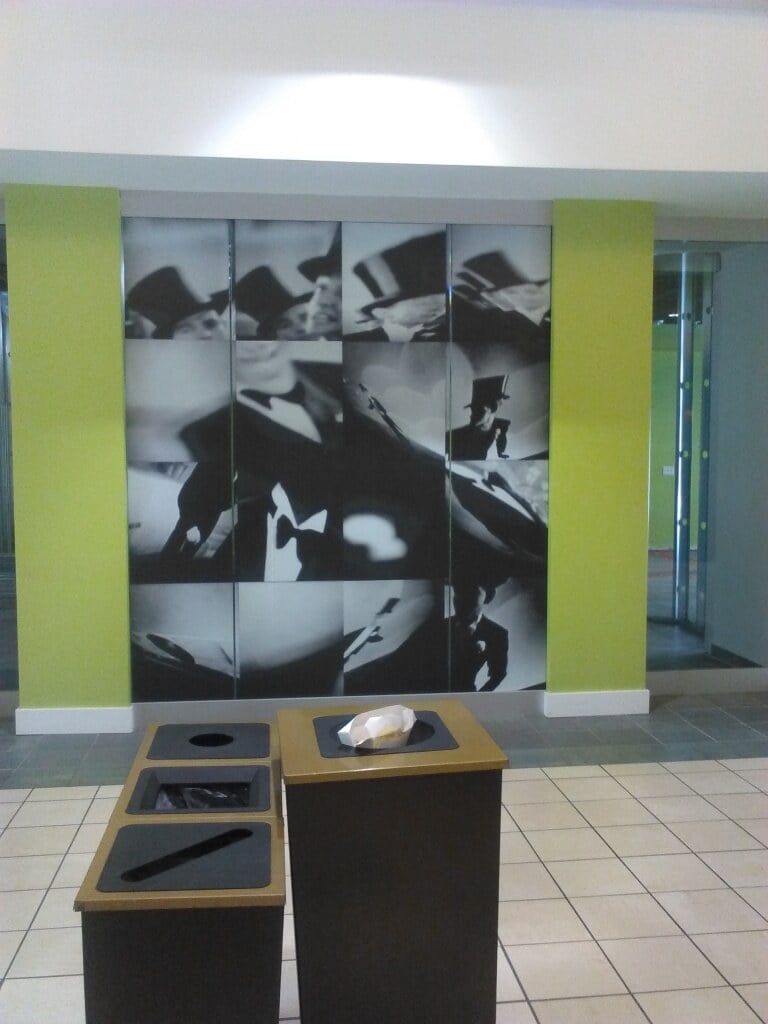 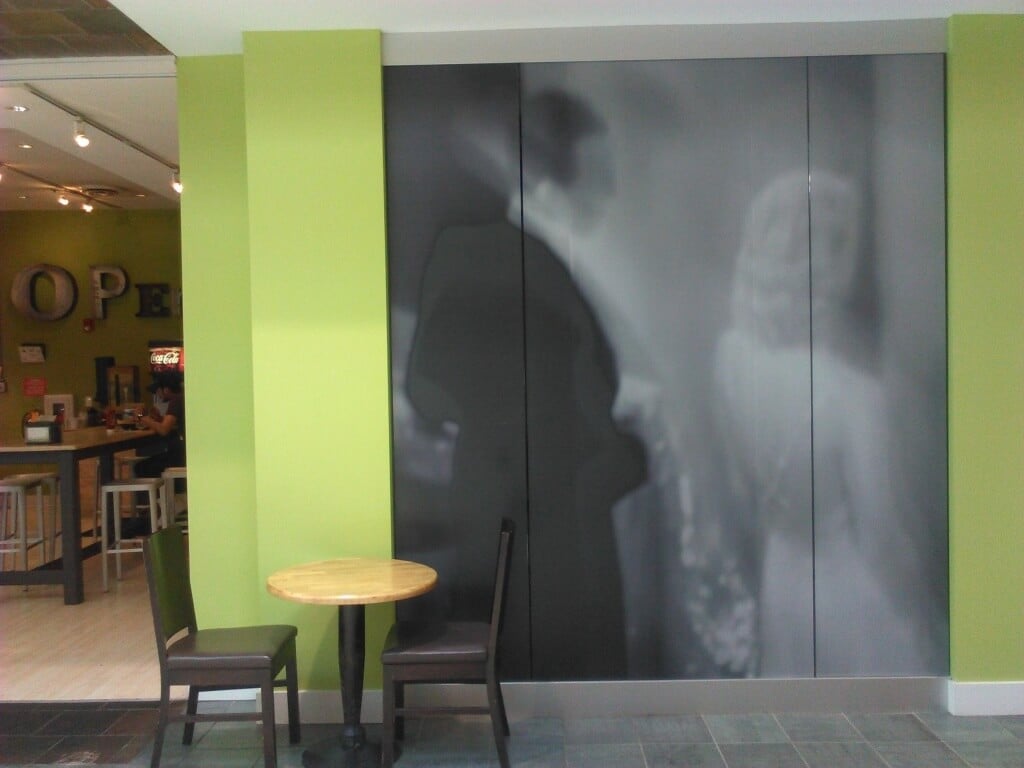 …So now our age will vibrate with my smartphone photos of Hochbaum’s iPhone photos of a TV-screen’s image made from airwave broadcasts of celluloid footage.