CNCF's Ihor Dvoretskyi and Razom's Dima Zakhalyavko describe the push to provide training materials for Ukraine as they rebuild from the destruction caused by Russia's invasion.
Nov 4th, 2022 1:58pm by Alex Williams 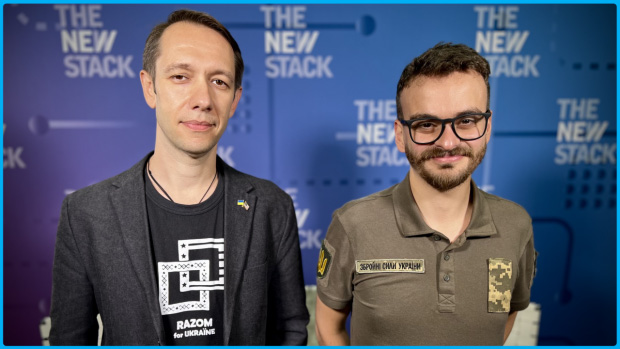 Ukraine has a bright future. It will soon be time to rebuild. But rebuilding requires more than the resources needed to construct a hydroelectric plant or a hospital. It involves software and an understanding of how to use it.

Ihor Dvoretskyi, developer advocate at the Cloud Native Computing Foundation (CNCF), and Dima Zakhalyavko, board member at Razom for Ukraine, came to KubeCon in Detroit to discuss the push to provide training materials for Ukraine as they rebuild from the destruction caused by Russia’s invasion.

Razom, a nonprofit, amplifies the voices of Ukrainians in the United States and helps with humanitarian efforts and IT training. Razom formed before Russia’s 2014 invasion of the Crimean peninsula of Ukraine, Zakhalyavko said. Since the full-scale invasion earlier this year, Razom has had an understandable increase in donations and volunteers helping in their efforts.

Individual first aid kits for soldiers, tourniquets, and medics supplies are provided by Razom, but so is IT training, materials to train the next generation of IT, translated into Ukrainian.

The Linux Foundation is participating with the Cloud Native Computing Foundation (CNCF) in participation with Razom for Ukraine on its Project Veteranius to provide access to technology education for Ukrainian veterans, their families, and Ukrainians in need.

“We’ve realized that basically, we can benefit from the Linux Foundation training portfolio, including the most popular courses like the intro to Linux, or intro to Kubernetes, that can be pretty much easily translated to Ukrainian,” Dvoretskyi said. “And in this way, we’ll be able to offer the educational materials in their native language.”

Ukraine has a pretty bright future.

“We just need to get through these difficult times,” Dvoretskyi said. “But in the future, it’s clear the tech industry in Ukraine is growing. Yeah. And people are needed for that.”

“A strong, democratic Ukraine — that’s essentially the vision — a European country, a truly European country, that is whole in terms of territorial integrity,” Zakhalyavko said. “The future is in technology. And if we can help enable that — in any case, I think that’s a win for Ukraine and the world. Technology can make the world a better place.”

Alex Williams is founder and editor in chief of The New Stack. He's a longtime technology journalist who did stints at TechCrunch, SiliconAngle and what is now known as ReadWrite. Alex has been a journalist since the late 1980s, starting...
Read more from Alex Williams
SHARE THIS STORY
RELATED STORIES
Software Startup Aims at Cluster Computing Barriers Oxeye Finds Bad Spotify Backstage JavaScript Vulnerability Discord vs. Slack: Which Is Right for Your Team? Making It Easier to Build Apps with Time Series Data Devs Are Excited by ActivityPub, Open Protocol for Mastodon
SHARE THIS STORY
RELATED STORIES
The Dropbox GitHub Data Breach Case Study: How SeatGeek Adopted HashiCorp’s Nomad Red Hat Helps Make Kubernetes Security More Accessible Case Study: How Dell Technologies Is Building a DevRel Team Software Developer Tool for Quantum Computers Launching Soon
THE NEW STACK UPDATE A newsletter digest of the week’s most important stories & analyses.
The New stack does not sell your information or share it with unaffiliated third parties. By continuing, you agree to our Terms of Use and Privacy Policy.