We interviewed Nic Williams, CEO of Stark & Wayne, a cloud services consultancy, and Marco Voelz, a developer for software giant SAP during Cloud Foundry Summit Europe in Basel last week to discuss during this podcast why BOSH continues to be at the heart of Cloud Foundry.
Oct 17th, 2018 12:02pm by B. Cameron Gain 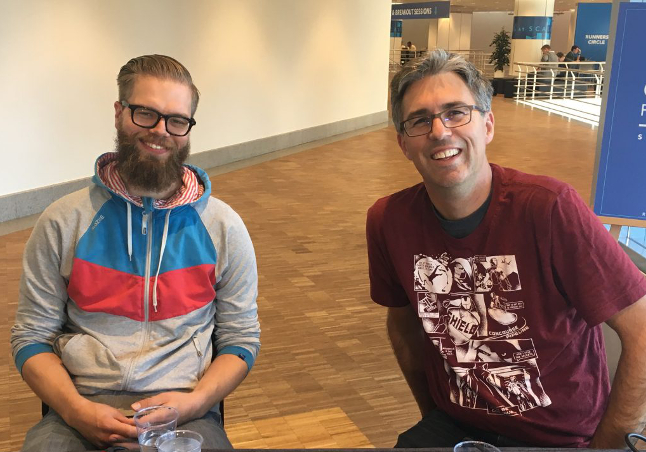 Using BOSH To Get The Stack Done

Cloud Foundry’s BOSH continues to serve many organizations as a missing Cloud Provider Interface (CPI) link for managing deployments throughout the production cycle across multicloud environments.

Dr. Nic Williams, CEO of Stark & Wayne, a cloud services consultancy, and Marco Voelz, a developer for software giant SAP, were on hand during Cloud Foundry Summit Europe in Basel last week to discuss during this podcast why BOSH continues to be at the heart of Cloud Foundry with Alex Williams, founder and editor-in-chief of The New Stack.

BOSH remains a key part of Cloud Foundry’s multicloud strategy thanks largely to its CPI, which “abstracts all those nitty-gritty infrastructure details from the BOSH code base itself,” Voelz said. In this way, BOSH can run on AWS, Azure, OpenStack or “wherever you like — as long as there’s a CPI for it,” Voelz said.

As a summary of what BOSH offers for those unfamiliar with the lifecycle management tool, BOSH, originally developed by VMware for Cloud Foundry PaaS, allows developers to “bring up your deployment, while all of your VMs take care of configuring that complicated cluster for you so you don’t have to,” Voelz said. BOSH “also has resilience capacities, such as health management” so that deployments remain “up and running.”

Williams said he was one of the first people to discover BOSH in 2012 shortly after the debut of Cloud Foundry and described the many changes it is has seen since. “Back then there was only one cloud,” Voelz said. “Now, there are many clouds and so the abstraction has evolved to suit those.”

Based in Palo Alto at the time, Williams described how he was  “with some VMware people and I would get very excited.”

“Cloud Foundry had come out and they talked about Cloud Foundry being the inner shell and that there was this mysterious outer shell that manages the lifecycle looking after this thing called Cloud Foundry,” Williams said.

Williams described how his team was having problems building AMIs and “just didn’t have the tooling.”

“And here was this thing called BOSH, which promised tooling around building AMIs or base images.” Williams said. “Our whole packaging system thereafter didn’t require [developers] to do incantations of magic and was otherwise dead simple.”

Flashing forward to today, Voelz said there “is no tool that gives you all of the properties in a single experience. With alternatives, deployments require knowledge about “about the actual infrastructure and about the differences between the clouds,” Voelz said. “I think what BOSH does best is abstracting all of those and not leaking too many details.”

A key benefit BOSH offers is how it “owns and operates the outside of the cloud and also the inside of the VM,” Williams said. “On the outside, it will provision a disk on Amazon and attach it,” Williams said. “But on the inside, it will mount and format it, and with that simple primitive, it can own and operate that disk, resize it and scale it.”

The next frontier for BOSH will consist of widening and optimizing the user experience for managing deployments and building releases, as both tasks are managed by multiple users. “This has lots to do with the current developments of on-demand service brokers, for example, while previously, BOSH was a tool that operators used when they needed to change the system state,” Voelz said.

As more users work with BOSH, a key challenge in the future will be to address “more and more deployments going on” under the umbrella of a single organization.

2:34: For those that may not be familiar with it, what is BOSH?
6:32: What is BOSH today that makes it still unique and important?
13:01: What’s the adaptation for using BOSH with Cloud Foundry Container Runtime and Kubernetes?
17:17: What is the context for Cloud Foundry running on top of Kubernetes?
23:51: How BOSH is helping developers work at scale.
31:15: Where the complexity has gone in today’s stack.