Vapor IO and the Emerging Market of Edge Computing 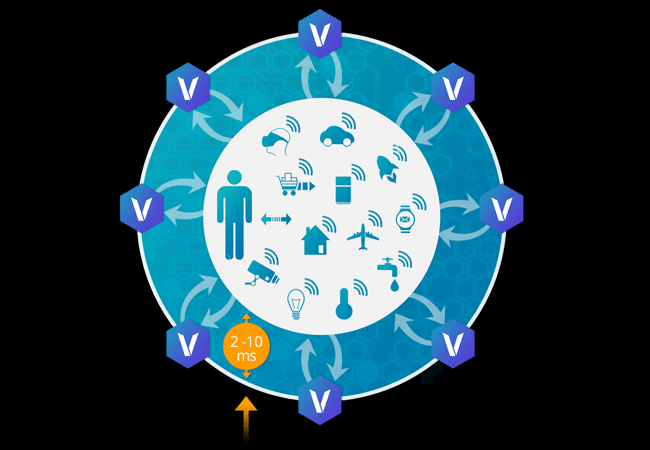 Our perception of what makes a data center is shifting all the time. We’ve already seen a move away from the large, monolithic bricks and mortar structures of old and seeing new manifestations in smaller form factors.

We’re now seeing it being taken one stage further with Vapor IO’s Project Volutus, which the company claimed was a “data center as a platform” aimed at cloud providers, cellular carriers and large enterprises.

Vapor IO’s CEO, Cole Crawford said simplicity was the key. “Our Vapor Chambers are completely self-contained and can be placed in harsh environments, such as at the base cell towers. They snap together like Legos: A three-person crew can build a micro data center in a half day. Our Vapor software makes it possible to run thousands of edge data centers remotely.”

OpenDCRE software can run as a service in every location, providing customers with a common API for analyzing and controlling their infrastructure.

As an example of how the system works, Crawford used the example of cloud provider with four data centers (two East Coast, two West) managed vertically but with no intelligence built in. Outside those geographic regions, users are going to struggle with latency issues.

“Look at like air travel: to get anywhere, I’ll first have to fly to a hub and then to my destination — the internet works in the same way. And even at the speed of light, there’s built-in latency,” he said.

In an endorsement of the technology, shared wireless infrastructure provider, Crown Castle, has taken a minority stake in Vapor IO. In a statement, Crown Castle Senior Vice President Phil Kelley said, “Edge computing will be a key enabler of the applications everyone is talking about, including autonomous driving, Internet of Things, augmented and virtual reality, and 5G. We believe our mix of approximately 40,000 tower locations and large metro fiber footprint is ideally positioned for a successful Volutus deployment.”

It’s a technology that, on the face of it, looks to treading the same path as content delivery network (CDN) providers but Cole said this was not the case. “We see the CDN providers as customers. Even a large CDN network will benefit from our last mile wireless presence and we are in talks with the major CDN companies about co-locating their equipment in our facilities to extend their CDN to the true edge of the wireless network,” he said.

The two technologies are very different, added Crawford. “CDNs are optimized to deliver static content in one direction (out to the end device). While some CDNs provide dynamic content delivery, they are not meant to replace cloud services.”

In addition to partnering with CDN companies, we also partner with the large cloud providers and other web scale companies. We make it possible to run the entire cloud stack at the edge, not just CDN content-serving capabilities. This lets developers and operators offload true cloud compute from their centralized servers running in our edge locations.”

Project Volutus, with hundreds of Kilowatts of compute capacity in each location, makes it possible to run data center scale workloads at the edge, doing everything from IoT data ingestion to distributed machine learning on GPUs.

According to Vaper IO, the computation for mobile devices can be done more with less latency at the edge of the network, not back at the data center.

Clive Longbottom, senior analyst with Quocirca, questioned whether Project Volutus could cope with such extensive workloads. “The mobile WAN runs the risk of being swamped by the amount of data that will be coming through not only from phones but from wearables, home devices and other wirelessly connected items. If all traffic from a base mast is allowed to go through to the center uncontrolled, then the promise of multi-hundred megabit throughputs from 5G will dissolve into thin air as chatty IoT data sucks it all up.”

However, Crawford said the system was designed to handle vast quantities of traffic. “The amount of data that can be ingested and processed at the edge depends on many factors, including the software stack the developers run and the types of field devices they connect to, which are customer specific, and we have no say in. However, our system will handle data quantities and devices that are multiple orders of magnitude of what is possible today.”

Currently, Volutus is aimed at the U.S. only although there are plans to expand, said Crawford. In the U.S., the project’s early access program will roll out to two cities later this year.

SHARE THIS STORY
RELATED STORIES
SRE Housekeeping: Where to Get Started for New Hires Snack Stack: Turning Winter Comfort Food up to 11 How to Get Started Filling 3.4 Million Cybersecurity Jobs 2023 Will Be the Year FinOps Shifts Left Toward Engineering Platform Engineering Won’t Kill the DevOps Star
TNS owner Insight Partners is an investor in: Coast.
SHARE THIS STORY
RELATED STORIES
Java's James Gosling on Fame, Freedom, Failure Modes and Fun Wellspring of Creativity: Why Public Domain Matters A Brief DevOps History: The Road to CI/CD Golden Paths Start with a Shift Left SRE Housekeeping: Where to Get Started for New Hires
THE NEW STACK UPDATE A newsletter digest of the week’s most important stories & analyses.
The New stack does not sell your information or share it with unaffiliated third parties. By continuing, you agree to our Terms of Use and Privacy Policy.