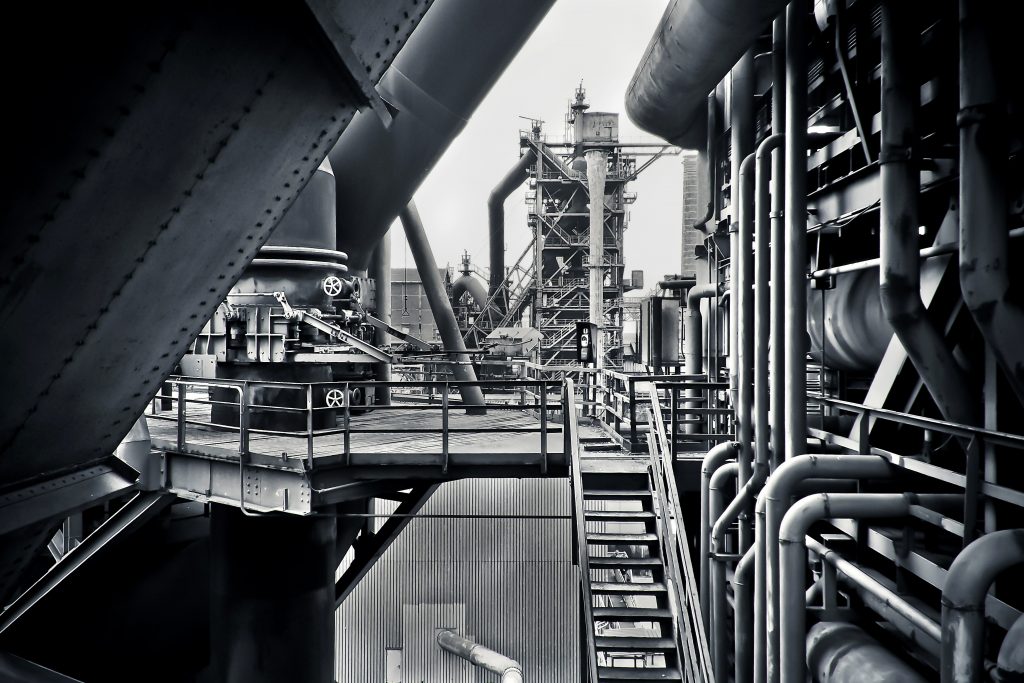 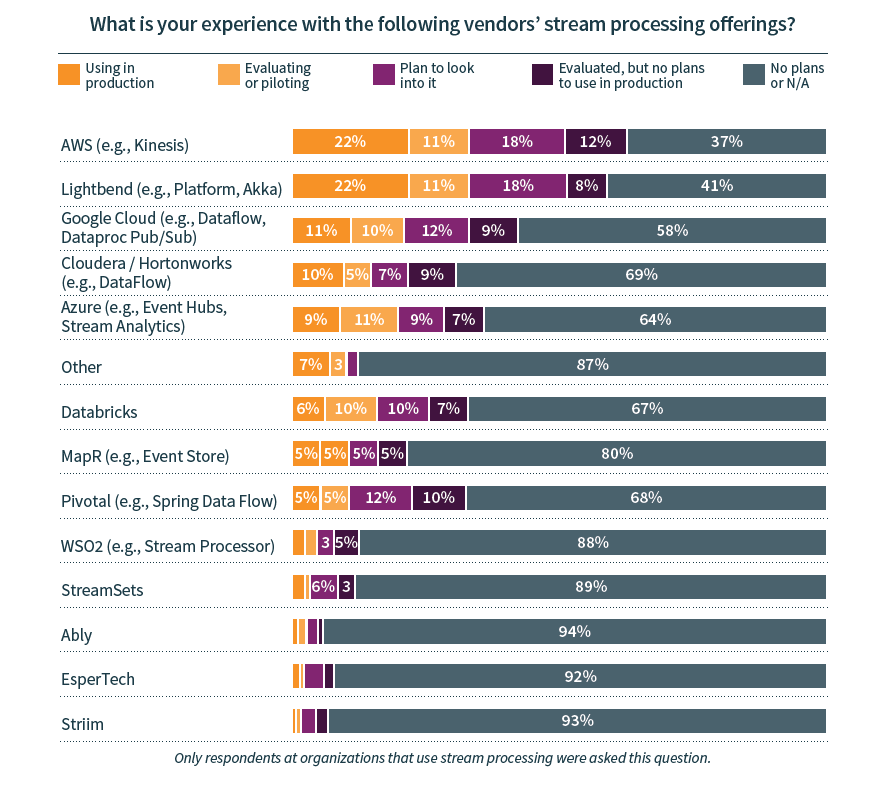 Source: Streaming Data and the Future Tech Stack. n≈429. This chart should not be used to calculate market share because a) Lightbend’s community is likely over-sampled, and b) Kafka specialists like Confluent were not asked about.

Given their heritage supporting a specific open source technology, it is not surprising that Lightbend (Akka), Cloudera/Hortonworks (Hadoop) and Databricks (Spark) show prominently on users’ roadmaps. Of those using or actively evaluating Akka Streams, 66% are also using or considering Lightbend; for Spark Streaming, Databricks gets 35% of the technology’s users/evaluators to also at least evaluate or pilot its product. For companies that integrate Hadoop as a source for data streaming, 38% are using or evaluating Cloudera. Note that several companies that provide managed or supported versions of Kafka were not included in the questionnaire. Given its prominence, we expect that Confluent will also see strong consideration by those with existing Kafka deployments.

With a varying degree of success, the big cloud providers are also gaining customers by offering a combination of managed open source and proprietary technologies. AWS is the leading vendor with 22% using one of its offerings, which include Kinesis and a recently added managed Kafka service. This lead is partly due to the company’s dominance in the cloud computing market; two-thirds of companies said at least one of their applications with stream processing has AWS as part of its stack. Of this group, 37% of are actually using the company’s stream processing offerings. Google also does well; although 25% of stream processing users have Google as part of their stack, 45% of this group is deploying an offering like Dataflow or Dataproc for a production application. Azure is less successful, with “only” 18% of these cloud customers opting for a Microsoft service like Event Hubs Stream Analytics. On a positive note, Azure production usage is particularly strong among those who have IoT use cases and those expecting the integration of multiple data streams to become front-and-center in the next year.

The following charts were also used to write this article. You are encouraged to read the full “Streaming Data And The Future Tech Stack” for more insight and analysis. As always, The New Stack will explain how open source technologies are being deployed whether it is self-hosted or a managed service. 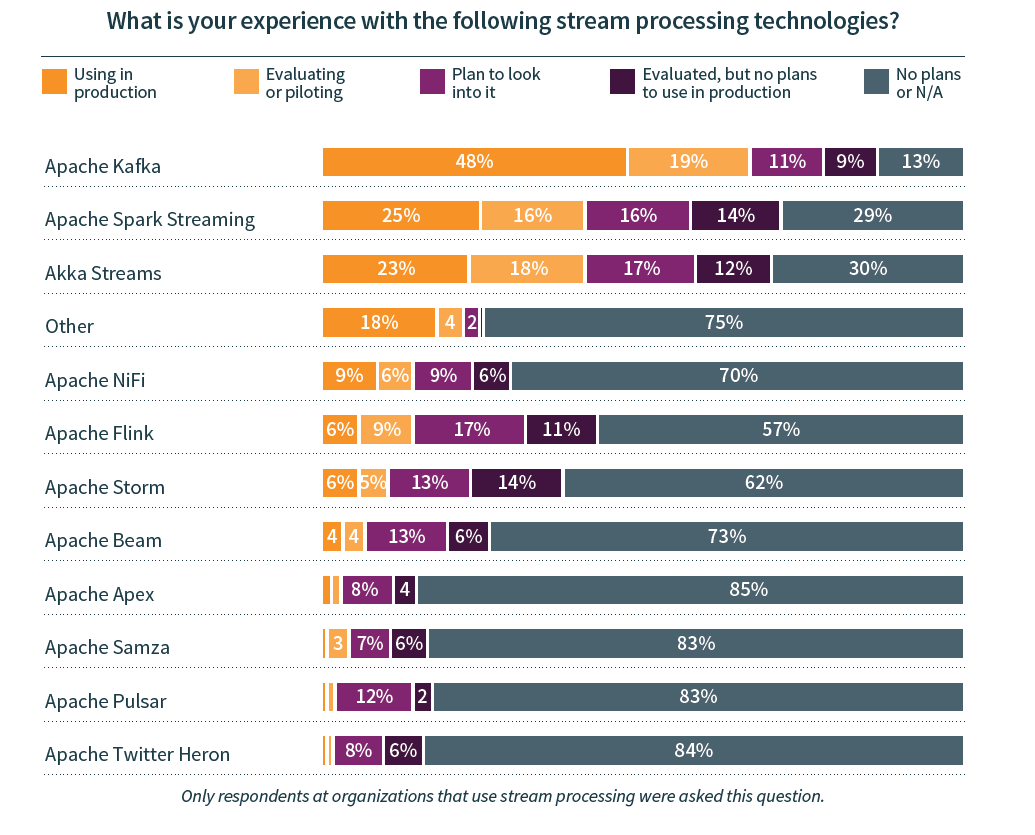 Source: Streaming Data and the Future Tech Stack. n≈410. Beyond the top three technologies, Apache’s Flink, Beam, NiFi, Pulsar and Storm are all getting significant levels of consideration. 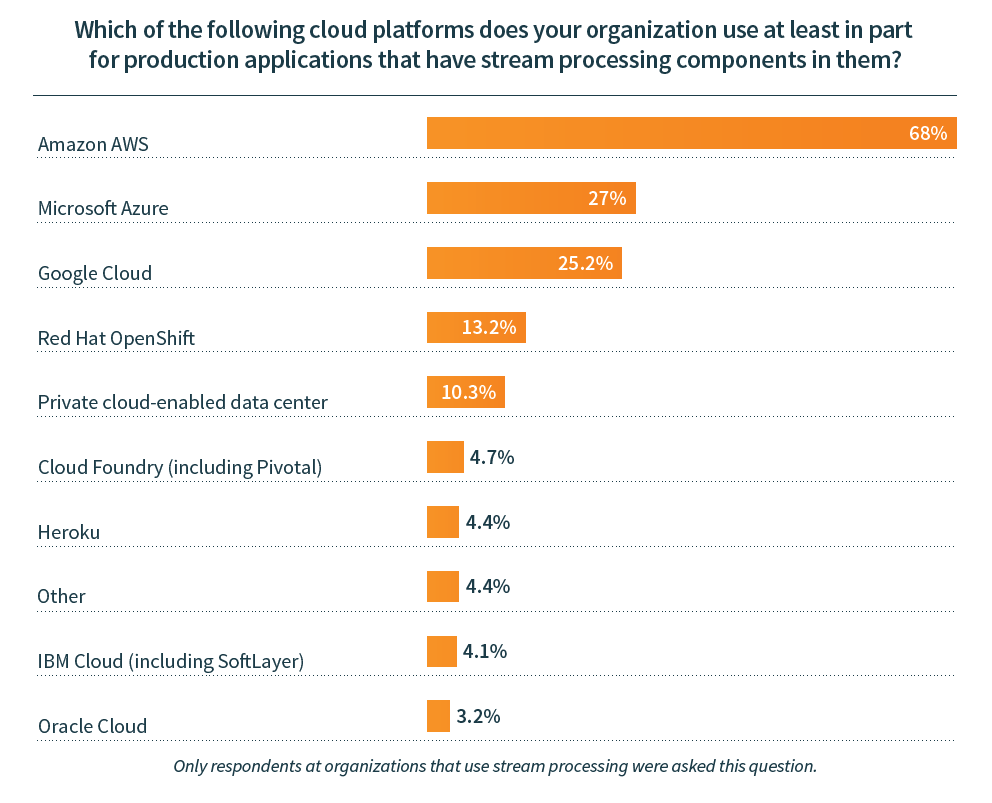 Lawrence has generated actionable insights and reports about enterprise IT B2B markets and technology policy issues for almost 25 years. He regularly works with clients to develop and analyze studies about open source ecosystems. In addition to his consulting work,...
Read more from Lawrence E Hecht
SHARE THIS STORY
RELATED STORIES
The Architect’s Guide to Data and File Formats  Processing Large Data Sets in Fine-Grained Parallel Streams with SQL Get Started with Text Classification Enterprise Blockchain Is Doomed Why Web3 Needs a Real-Time Data Layer Now More Than Ever
TNS owner Insight Partners is an investor in: Ably, The New Stack.
SHARE THIS STORY
RELATED STORIES
Why Web3 Needs a Real-Time Data Layer Now More Than Ever Bit.io Offers Serverless Postgres to Make Data Sharing Easy What I Learned at Neo4j’s NODES 22 Conference Why You Need a Centralized Approach to Monitoring  Dig Security: One Tool for Multicloud Data Security
THE NEW STACK UPDATE A newsletter digest of the week’s most important stories & analyses.
The New stack does not sell your information or share it with unaffiliated third parties. By continuing, you agree to our Terms of Use and Privacy Policy.