Video: How HPE Helion Eucalyptus Can Make AWS Easier to Use 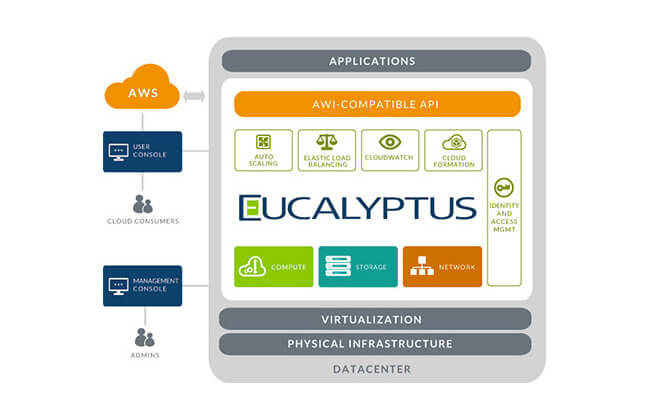 Deploying software at scale requires companies to work quickly, whether from a private cloud or an off-premise datacenter. HPE offers developers the flexibility of AWS in their infrastructure with its Helion Eucalyptus solution. The Helion Eucalyptus API gives developers access to a variety of AWS tools and services, including EC2, S3, STS, SWS, and EBS.

The video below is a short demonstration highlighting the HPE Helion Eucalyptus AWS API, and its many uses for developers when configuring their own AWS-powered applications.

Open How HPE Helion Eucalyptus Can Make AWS Easier to Use on YouTube.

In this demonstration, HPE Senior Manager of User Experience and Front-End Development Jenny Loza showed how the HPE Eucalyptus API improves the developer experience with AWS right away. Upon first starting up the Eucalyptus console, developers are not only able to log into Eucalyptus, but AWS itself using their own private keys. This allows for teams to have a single tool to manage their resources, keeping things streamlined.

Users will first note that HPE strives to keep the differences between the standard AWS management console and the Helion AWS API consistent. “We’ve tried to maintain a lot of consistency with terminology and things like that, so that if you’ve come from AWS, you should be able to join Eucalyptus and not have any kind of really jarring feeling,” said Loza.

Hewlett Packard Enterprise helps organizations innovate, stay competitive and quickly turn ideas into value. It is the company best equipped to build a bridge from where enterprise IT is today to where it needs to be.

After logging in, users will be able to view their cloud’s dashboard, which will display any running services and object storage. Loza then began the setup of launching a new instance with the HPE Helion Eucalyptus AWS API, upping the ante by using CloudFormation to do so with an AWS template.

“You can bring that CloudFormation template right over into Eucalyptus and use it to deploy your application in Eucalyptus with no or very few changes,” Loza said. 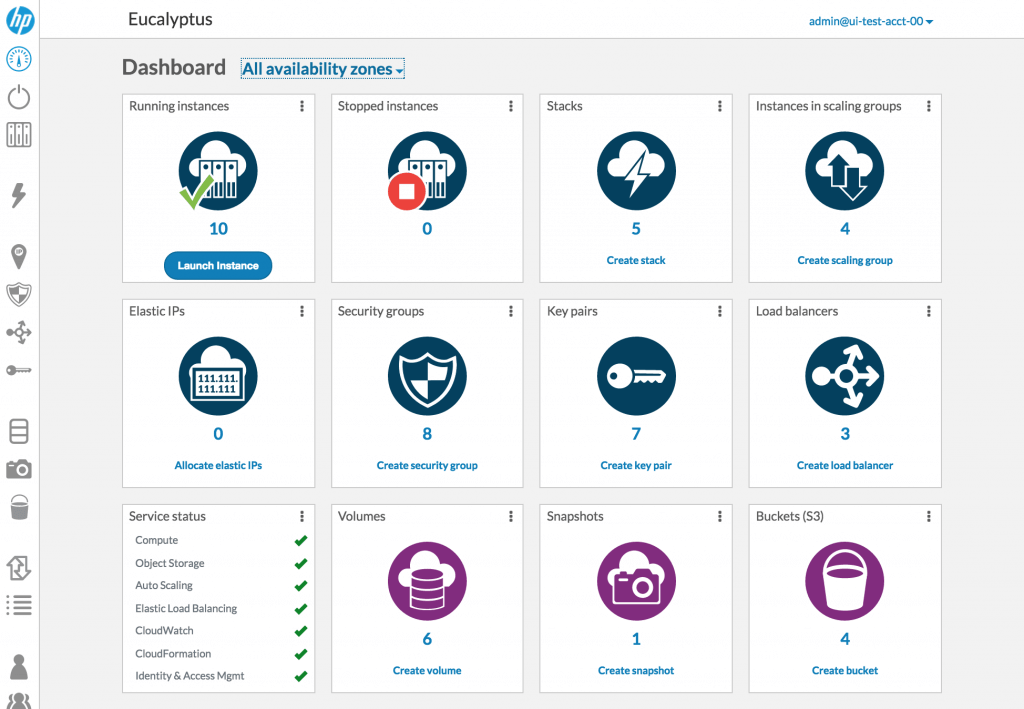 After selecting a CloudFormation template, Loza created a new EC2 instance with an elastic IP address. Copying the URL of the template, she navigated back into Eucalyptus to create a new CloudFormation stack. Eucalyptus alerts the user that the template they are using is not native to it, prompting them to parse it for any required updates. Unlike standard AWS templates, Eucalyptus users are not billed for AWS resources used from this template as it is now a part of their own on-premise cloud.

Keeping Everything Secure, Flexible, and Scalable

After creating their own stack, Loza showed how users will be able to view a workflow-centric interface that allows them to prioritize tasks as needed. Developers may find themselves working with an unsupported service in Eucalyptus, though the team at HPE doesn’t leave its users hanging if they’re met with an unsupported piece of their infrastructure.

“We’ll tell you exactly what your service is that’s unsupported so that you can go in, fix your template, and do what you need to do,” Loza said.

The team at HPE has seen many of its use cases center around load-based automatic scaling for working with applications at scale. Loza explained that, “The traffic that’s coming in will slow evenly to all the instances through a load balancer, and the number of instances that are supporting the application will automatically grow and shrink depending on the level of traffic and the level of workload.” The HPE Helion Eucalyptus API allows developers to not only create load balancers, but define auto-scaling groups as needed to fit their own use-cases. 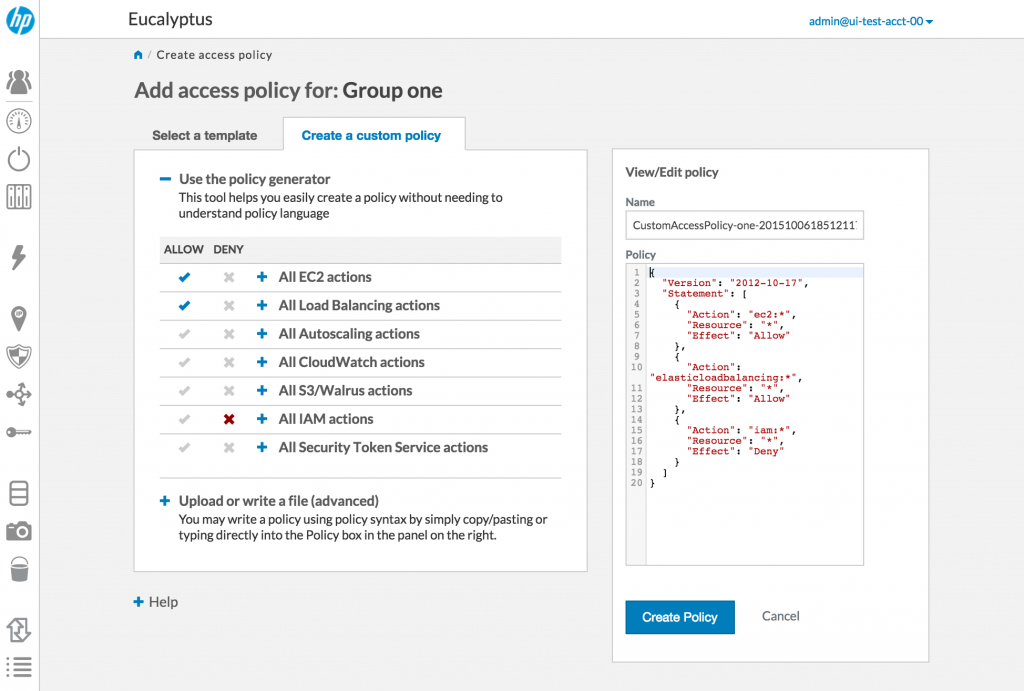 Developers can create scaling groups and define their policy directly in Eucalyptus, with the ability to set CloudWatch alarms to trigger if traffic exceeds a certain point. HPE offers developers a workflow-centric approach to policy management, with the ability to also set alarms based on CPU utilization, which Loza then demonstrates by configuring a series of alarms set to scale up by one instance if CPU usage spikes over 50 percent.

Users can also create user groups with their own unique security permissions from directly within Helion Eucalyptus. Loza noted that the HPE Helion Eucalyptus API can, “Automatically create some pretty easy policies for you, so you can allow someone to have full access, you can allow someone to have access to resources, but not be able to create groups, adjust policies, and you can provide read-only access if you want or you can create your own custom policy.” 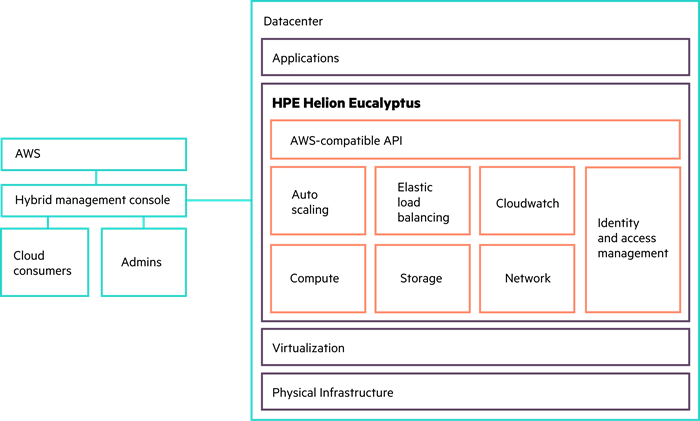 As Loza explained at the end of the demo, the HPE Helion Eucalyptus AWS API is all about flexibility, allowing developers to get more done with less interruptions. “They can still continue to develop what they’re developing exactly the way they’ve been developing it, but they can use it in-house. People can use this for development, test, and then deploy into AWS in production,” Loza said.