Vint Cerf’s Mission to Bring the Internet to Outer Space 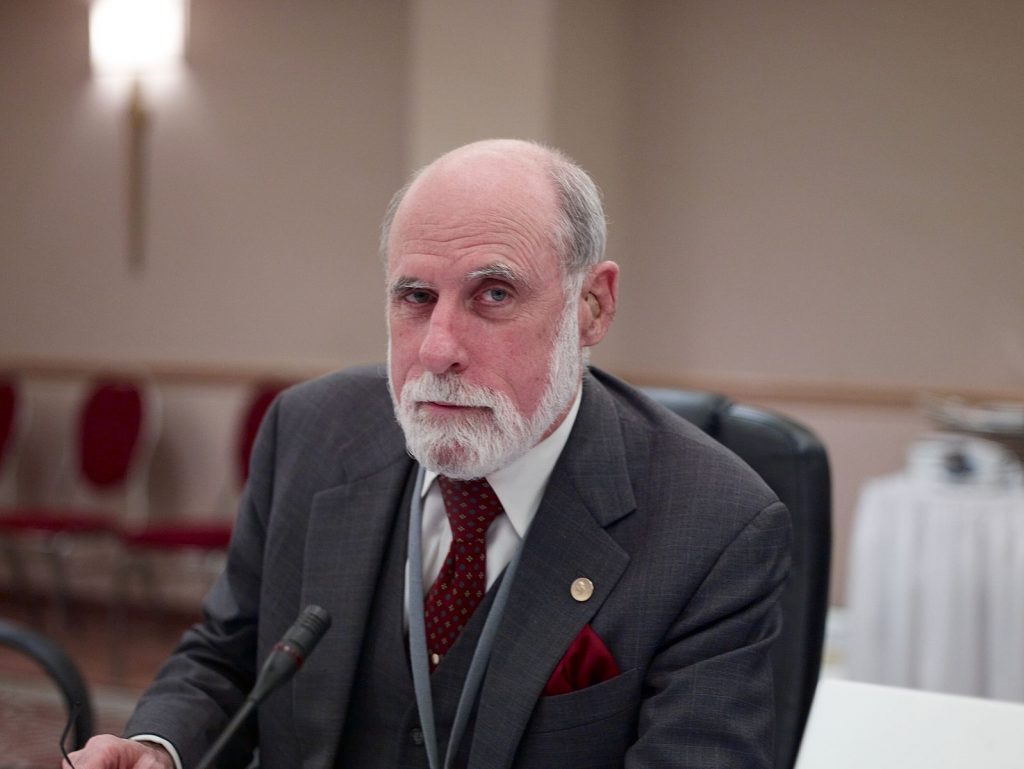 Seventy-seven-year-old Vint Cerf is credited as the father of the internet — but he’s now tackling an even bigger challenge. He’s joined with the scientists who envision a network that can scale across hundreds of millions of miles, in an airless vacuum, where data transmissions can be blocked by, for example, the planet Jupiter. Cerf’s working with a team whose lofty new dream is an internet which can connect our spacecraft in outer space — to the other spacecraft, and to listeners waiting here on earth.

It’s instructive to see how engineers approach a task that stretches endless on an interplanetary scale — and what it took to lead scientists to this galaxy-sized dream.

Guide to the Galaxy

Back in the 1970s, Cerf co-developed the TCP/IP protocol with Bob Kahn, which became the foundation for all internet communication today. (Though in a recent article in Quanta, Cerf stresses that “A lot of people contributed to the creation of the internet.”) But what’s less known is that Cerf has also held a lifelong interest in outer space. One 2001 interview remembers that as a child, Cerf had jerry-rigged tiny rockets out of shell casings and match heads, and notes “summer internships at the company that made F-1 engines for the Apollo program.”

So while today Cerf is Google’s chief internet evangelist, he’s also a visiting scientist at NASA’s Jet Propulsion Laboratory (JPL), where since 1998 he’s been working on an “interplanetary internet,” according to a new article in Quanta magazine. In a video accompanying the article, Cerf describes it as “a network that would span the entire solar system in order to support manned and robotic space exploration.”

The plan is to create free and interoperable standards, “so that the various spacefaring nations could help each other,” Cerf told the magazine. “As spacecraft get built and deployed, they carry the standard protocols that become part of the interplanetary backbone [network]. Then, when they finish their primary scientific mission, they get repurposed as nodes…”

Or, as the tech site SiliconANGLE once put it, “in this internet, millions of miles can separate the nodes, and its backbone can comprise old scientific orbiters repurposed to be data relay links.”

The U.S. Defense Advanced Projects Agency (DARPA) established a team, including Cerf, to design the system, remembered SiliconANGLE. And Cerf tells Quanta the story of how in 2004 NASA used the protocol when improvising “a small store-and-forward interplanetary internet” to work around a communications glitch. NASA’s JPL engineers remotely re-programmed the Mars orbiters to act as nodes between the rovers on the surface of Mars and NASA’s Deep Space Network of giant antennas here on earth. Cerf adds that later JPL engineers also tested the same protocols on a NASA spacecraft performing comet flybys.

In 2005 NASA had even planned a $300 million, laser-based interplanetary communication link to connect Mars rovers with Earth scientists. The idea promised “a dramatic breakthrough in the amounts of information spacecraft can reliably transmit back to Earth,” reported Space.com — nearly 10 times speedier than existing radio communications. Though the mission was eventually canceled due to other funding priorities, it “would have been a great showcase” for the protocol “and its ultrafast transmissions,” SiliconANGLE points out.

By 2017 the space protocol had become the standard for the International Space Station, according to SiliconANGLE — though Cerf was still frustrated by slow adoption elsewhere, complaining that “the mission planners usually resist doing anything new or risky… We just have to convince NASA scientists that they are free to plan missions that aren’t supported by point-to-point radio links.”

Towards that end, earlier this month the InterPlanetary Networking Special Interest Group published a long-term roadmap document, suggesting an Interplanetary Networking Consortium to work towards adoption while also reiterating its plan for supporting working groups.

And in a show of interest, NASA also recently created a new webpage about the protocol, lauding its vision for a Solar System Internet utilizing “multiple hops via relay spacecraft and other intermediate nodes.”

Dubbed “Delay and Disruption Tolerant Networking” (or DTN), NASA writes that it “provides assured delivery of data using automatic store-and-forward mechanisms,” as well as authentication, encryption, and integrity checks. Different priority levels can even be assigned to different kinds of data, “ensuring that the most important data is received ahead of less important data.”

Quanta notes extra resilience comes from “bundling” protocols, which Cerf explains can accommodate a temporarily inauspicious positioning of the planet Jupiter. While data packets are still switched from node to node — or, in some cases, space-based relays — “Why throw the information away, instead of hanging on to it until Jupiter shows up?” One reason there’s no storage component in TCP/IP is that the cost of memory in the 1970s could be prohibitively expensive, Quanta notes.

Interestingly, the protocol isn’t just useful for outer space. One Sweden-based project successfully used the protocol to bring email and web access to Sweden’s remote population of reindeer herders. A paper on the project describes it as “opportunistic routing” through both fixed relays and “mobile” relays (tablets and laptops). Because even electricity was hard to come by, they used a combination of diesel generators and high-capacity batteries to power hotspots (and re-charge their tablets and laptops).

Cerf describes other possible scenarios to Quanta — for example, after a major disaster when there’s damage to the communication infrastructure, or in use with instruments sending data from the ocean floor that are only intermittently connected. “You need a protocol that says: ‘Don’t panic! It’s OK, just hang onto it.'” And it could also help battery-driven devices conserve power, so Cerf is exploring its use in mobile environments.

But it seems like underneath it all is a simple but powerful dream — to extend the power of the internet into outer space. As Cerf tells SiliconANGLE, “It means a lot. It has been a nearly 20-year odyssey.” And he adds that as someone who worked on engines for the Apollo program as a young man, “the idea that I could participate in a lasting legacy in space is really beguiling.”

SHARE THIS STORY
RELATED STORIES
How Jit Builds a Platform Engineering Mindset in the Cloud How Will Working in Tech Change in 2023? The Power and Ethical Dilemma of AI Image Generation Models Snack Stack: Turning Winter Comfort Food up to 11 2022 in Review: AI, IT Armies, and Poems about Food
SHARE THIS STORY
RELATED STORIES
How to Get Started Filling 3.4 Million Cybersecurity Jobs SRE Housekeeping: Where to Get Started for New Hires Wellspring of Creativity: Why Public Domain Matters 2023 Will Be the Year FinOps Shifts Left Toward Engineering Why Your Code Sucks: Common Excuses for Bad Programming
THE NEW STACK UPDATE A newsletter digest of the week’s most important stories & analyses.
The New stack does not sell your information or share it with unaffiliated third parties. By continuing, you agree to our Terms of Use and Privacy Policy.