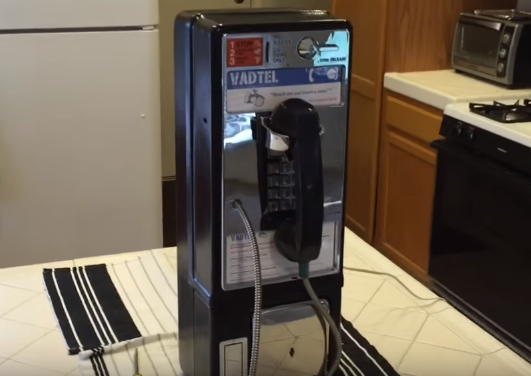 While pay phones are rapidly disappearing from the planet, at least one unit has found a comfortable home in a developer’s kitchen.

In a new YouTube video, Ryan Finnie, a collector of vintage telephones, shows off his latest acquisition, a working 1980s-era Western Electric 1D2 pay phone, which he purchased on eBay for around $200, and hooked into his home PBX. With a simple ATA adapter, Finnie was able to convert the phone from plain old telephone service (POTS) to SIP format.

The video shows him picking up its receiver and getting a dial tone, and then using its old-fashioned dial pad to make actual phone calls.

And there’s also some new functions that he’s jerry-rigged himself — one that plays back your voice, and another that immediately calls back, just so you can hear that familiar 1980s-era telephone ring. “I’ve got those on my PBX, because it makes testing [phones] easier,” he said. He even affixed a customized informational card affixed below the number pad, identifying the service provider as “VadTel.”

One modification he had to make was to prevent the phone from requiring a coin deposit before activating its handset, and from getting backed up in the phone itself. The phone company used to remotely trigger the coin’s final descent into a “coin vault” at the bottom of the machine.

This project taught Finnie a lot about telephony — and also a lot about buying phones on eBay. These sturdy payphones had two strong locks — one over the coin vault, and another over the central housing for all of the telephony hardware — so if an eBay seller is offering you a used payphone, “Make sure you get a T key that unlocks them,” he advised.

Finnie was also pleased that this payphone even came from an indoor location, so after all of these years, its shiny chrome was surprisingly undamaged. “The average price, I would say, of a working payphone starts at $250 and only goes up from there. So I waited until I got a decent bargain on it!”

His video offers viewers a rare and fascinating tour of the inner workings of the old payphone. Finnie removes both locks and the upper casing, then explains how its modular construction prevented tampering — even from technicians who were servicing the device.

Then he spends the remainder of the 40-minute video showing off other prizes from his phone collection.  There’s a desk phone from the Gaylord Opryland Resort in Nashville, which was damaged by a flood in 2010, and another one from the Riviera Hotel and Casino in Las Vegas.

By day, Finnie works as a systems administrator for Canonical, though you may know him from his open source projects such as 2ping, a bi-directional ping utility, and Unladen, which is block-level storage software for Swift clients. Even for someone as creative as Finnie, his phone resuscitation project may leave the observer asking “Why?” But Finnie tells his viewers it’s the same answer he gave when he bought 10 acres of land in the Nevada desert.

“It was interesting, and I could afford it,” he said.