Visual Basics: Codecademy Launches a Course on Coding with Emojis

July 17th was "World Emoji Day," and so the online learning site Codecademy found a fun way to celebrate. It unveiled a five-hour mini-course teaching Emojicode, a unique programming language that consists entirely of emojis.
Jul 26th, 2020 6:00am by David Cassel 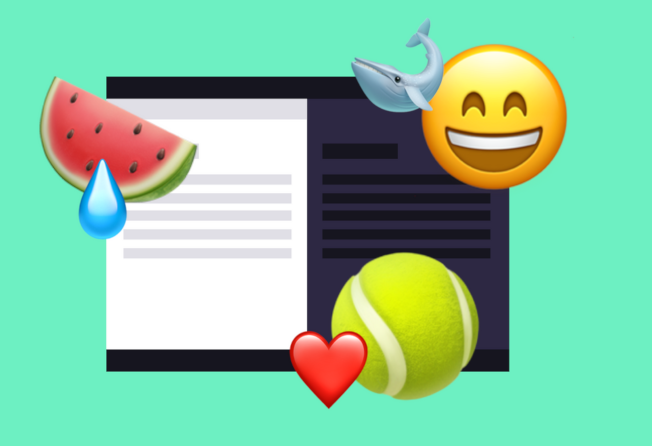 July 17 was “World Emoji Day,” and so the online learning site Codecademy found a fun way to celebrate. It unveiled a five-hour mini-course teaching Emojicode, a unique programming language that consists entirely of emojis.

“We believe that Emojis have expressive force,” explained the language’s official web page. “Let’s use that to make programming more fun and accessible.”

Originally, Codecademy planned to reveal the mini-course on April Fool’s Day, but was delayed in the height of the world dealing with the COVID-19 pandemic.

“I think the marketing team didn’t want to be too tone-deaf, so we kind of backed off this until we found a better day, which is now, World Emoji Day,” senior curriculum developer Sonny Li said on YouTube during a special hour-long interview with the language’s creator, Theo B. Weidmann, who helped design and review Codecademy’s new mini-course.

Their interview begins by explaining Emojicode’s filename extension, which is either .emojic or… the grape emoji. “I need to say something about this,” Weidmann interjects. “I was always against using emoji filenames. But it turned out that the Emojicode community really enjoyed using emoji filenames… so we decided to introduce that.”

Li acknowledges “it really embodies what Emojicode stands for.”

Emojis are small digital images defined in Unicode with a dedicated set of hexidecimals so they can be rendered the same across all computers.

In Emojicode, the grape emoji signals the beginning of a block of code, while the end of the block gets indicated with the watermelon emoji. But why grapes? Mostly personal preference, Weidmann acknowledged, although he adds that early on, “I decided to use emojis that are very rarely used to express something meaningful” for the everyday symbols like the curly braces found in other languages.

It’s a racecar-starting checkered flag emoji that indicates which code runs during execution, and instead of quotation marks around text, emojicode uses a smiley face at the beginning and an exclamation point at the end. To indicate a string, the code is enclosed between two “ABC” emojis.

In their interview, Codecademy’s Li agrees with a YouTube commenter who said the language helps you visualize how code works — while thinking about coding in a new way. “Certainly…” Weidmann responds. “We don’t code thinking about the words that actually are there… That’s not how we program, actually. It’s the same with mathematics, by the way. Those are also just signs somebody made up.”

The fun continues throughout the language. The pig-nose emoji method accesses the list’s elements, while a hamster emoji shuffles them. And the list itself is created by a set of variables between the popcorn emoji and the eggplant emoji.

And yes, emojis can be considered part of a string. In fact, even the error messages include an emoji (right after the more-useful line number and character position of the error.) And after printing out the error-containing line, the up-arrow emoji is even used to point to where the error occurred.

“It was really important to me that the error message be customized with emojis.”

Assigning values to variables is done with a right-pointing arrow. Although declaring “mutable” variables, with non-constant values, requires additional emojis — the crayon, and the “new” emoji. And Emojicode also enforces strict typing for its variables.

“We don’t have functions in Emojicode,” Weidmann explains in his interview. “It’s just objects, like in Java.”

A thought bubble emoji is used for a comment. And the symbol for modulo — which gives the remainder after dividing two numbers — is a person tossing something into a garbage can.

Codecademy calls it a “light-hearted language” with a “playful syntax,” and their course’s web page argues “you will never look at your go-to programming language the same way again.”

Though they do include a warning for new programmers. “We wouldn’t recommend you use this as your first course in programming.”

Birth of a Language

Emojicode compiles into fast-running native machine language, and the documentation explains that the language is fully open source. Its GitHub repository even points out that a Dockerfile is available for building in a Ubuntu 18.04 environment. But where did the language come from?

By day Weidmann is a Zurich-based digital product designer — at least, according to Google’s translation of his German-language web page. “Our core competence lies in recognizing and clarifying needs and functionalities.”

In a 2016 essay, Weidman acknowledged that he can’t clearly remember why he started the language, “but I do remember that somebody sent me a message with a lot of Emojis and I suppose my brain ultimately started parsing that as code.”

Weidmann’s first attempt in 2014 was just an interpreter using JavaScript, according to comments he made to Codecademy. “The idea turned out to be quite interesting, and I started to implement the language in C.”

The first public version was released in early 2016 — and it drew a range of reactions on Hacker News. “It’s about time we let go of the symbols hardcoded onto our keyboards and start finding better abstractions for our thoughts…” wrote one self-identified programmer/entrepreneur. But another commenter had a more visceral reaction.

“I had a nightmare strangely similar to this recently…”

The language has now attracted a small but loyal following. During his interview, Weidmann points out there are already plugins for text editors like Sublime and TextMate with keyboard shortcuts for inserting the language’s emojis, while others have accomplished something similar using a custom keyboard layout.

And there was also once an Emoji IDE plugin for the Atom editor, “but I gave up supporting that,” Weidmann adds later because the whole thing was too much work for the benefit — let’s put it like that.”

“Maybe all software everywhere is going to be written in Emojicode. I don’t know.”

In the meantime, he can reflect proudly on what he’s brought into the world: A language that lets geeks dream of acing a whiteboard coding interview just by drawing a racecar flag, a smiley face, two “ABC” icons, a red exclamation point, and a watermelon.