At this latest cloud crossroads, 59% of IT professionals are running workloads in an off-premises private cloud according to previously unreported data from the "Faction 2020 VMware Cloud on AWS Market Survey."
Sep 4th, 2020 3:00am by Lawrence E Hecht 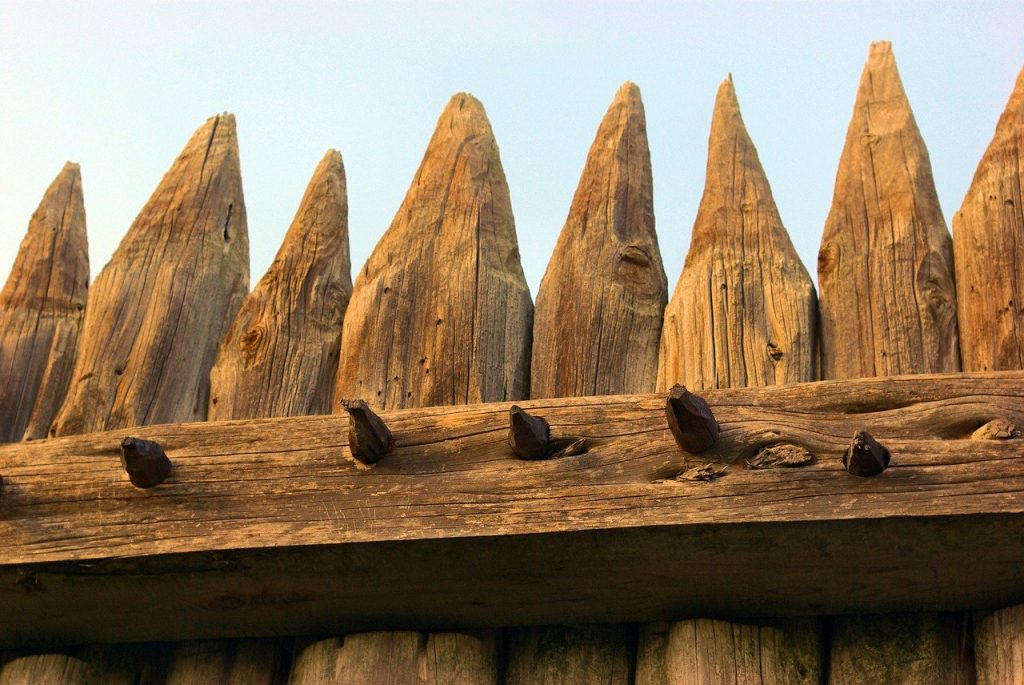 The early 2010s saw enterprise workloads become virtualized, with many eventually running in so-called private clouds based on software such as VMware vSphere and OpenStack. Enterprises accelerated their adoption of public clouds as the decade progressed, but well more than half of the organizations The New Stack contacted this summer still require at least some of their cloud services to be provided on-premises.

At this latest cloud crossroads, 59% of IT professionals are running workloads in an off-premises private cloud according to previously unreported data from the “Faction 2020 VMware Cloud on AWS Market Survey.” Faction is a managed service provider for VMware Cloud on AWS. Our assumption is that most if not all of the survey’s sample were VMware users because the VMware User Group accounted for 83% of the 1,054 respondents, with the remainder solicited from Faction’s database.

The report presents VMware Cloud on AWS as a growing market. Rapid increases in the number of hosts deployed with VMware Cloud on AWS shows that money is being made, but grumbling among channel partners also indicates that there is not enough room for a diverse range of competitors. There is an argument to be made that its best days are already behind it because the off-premises private cloud is really a stop-gap measure that allows companies to migrate workloads without modernizing them.

While private off-premises clouds are common, only 7% of respondents run VMware Cloud on AWS, which means that at least half of all VMware users are running an off-premises private cloud with an alternative approach like Amazon VPC. A comparison with last year’s report is not encouraging. Not only did that 7% figure remain essentially unchanged, but the pool of potential customers shrunk. In 2019, 55% of respondents with an off-premises private cloud were either using or considering the VMware on AWS offering, but that dropped to 45%, at least partly because of an uptick in people that had evaluated and rejected the option. 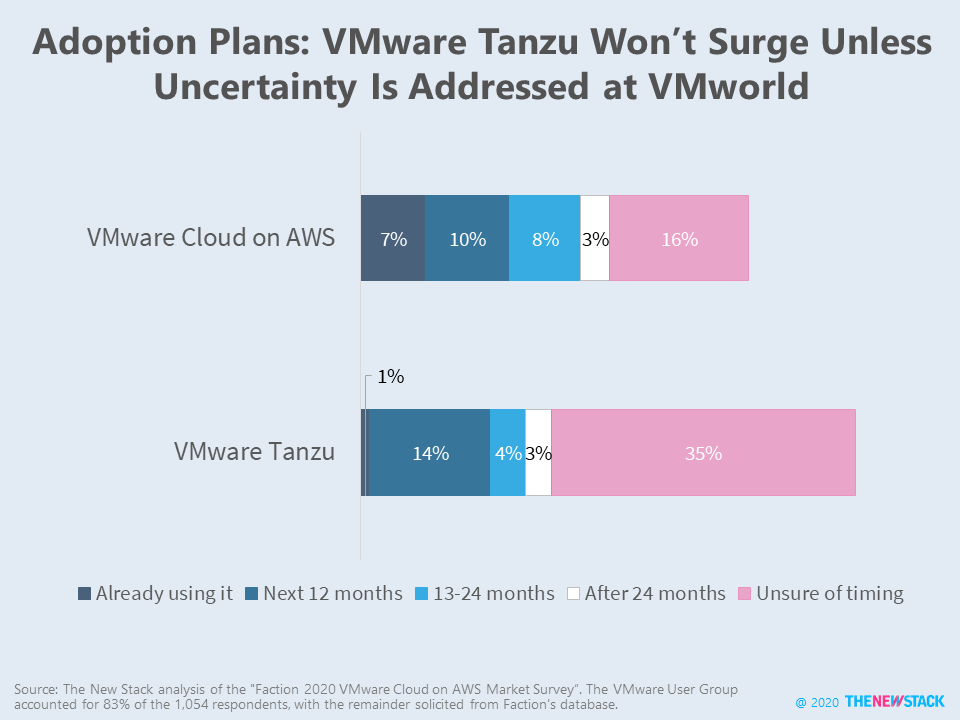 VMware Cloud on AWS is often being considered as part of a larger strategic IT initiative that may include closing older data centers to save money. The top use case for those currently running the solution is data center extension, which means that some type of hybrid cloud can be enabled. Migrating complete data centers and disaster recovery are also primary use cases, but this is not very strategic and is likely not the cheapest long-term approach.

The complexities of the latest generation of cloud architecture can be daunting, which is why VMware has released Tanzu. So far only 1% of the Faction survey is using it, but many more are planning to. Tanzu will be able to be deployed on AWS Outposts in customers’ own on-premises data centers as well as off-premises of the next generation of cloud architecture can appear daunting.

Here’s the takeaway: By at least one measure, private clouds running vSphere have declined, while on-premises infrastructure like AWS Outposts, Google Anthos and Microsoft Azure Stack are flourishing. If customers run a cloud public cloud provider’s infrastructure on-premises, then there is a real incentive to get abandon VMware’s software-defined data center software and the joint offering it has been marketing with AWS for the last four years. 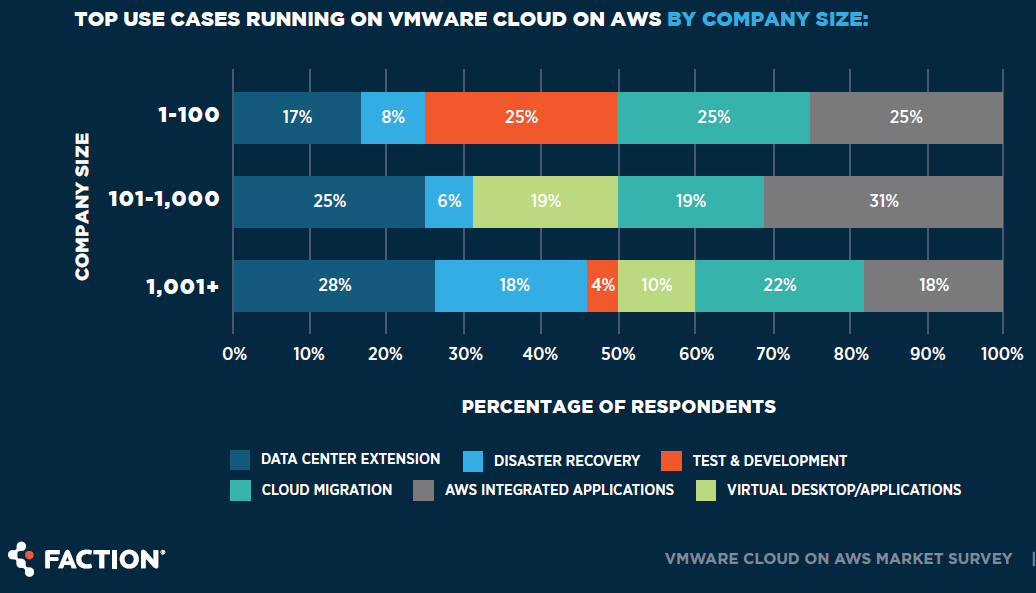 Lawrence has generated actionable insights and reports about enterprise IT B2B markets and technology policy issues for almost 25 years. He regularly works with clients to develop and analyze studies about open source ecosystems. In addition to his consulting work,...
Read more from Lawrence E Hecht
SHARE THIS STORY
RELATED STORIES
Is Low-Code Development Better for the Environment? Wix Tackles Application-Level Security with Custom Detector AWS Inf2: A 12-Chip System for Large-Scale ML Production Multicloud vs. Hybrid Cloud: Key Comparisons and Differences AWS Code Catalyst: A 'Low-Code' Approach for the Dev Lifecycle
TNS owner Insight Partners is an investor in: The New Stack.
SHARE THIS STORY
RELATED STORIES
Qlik Plans to Acquire Talend. Is it a Data Management Double-Dip? Is Low-Code Development Better for the Environment? Multicloud vs. Hybrid Cloud: Key Comparisons and Differences How Jit Builds a Platform Engineering Mindset in the Cloud Data, Analytics and AI: What Will Happen in 2023
THE NEW STACK UPDATE A newsletter digest of the week’s most important stories & analyses.
The New stack does not sell your information or share it with unaffiliated third parties. By continuing, you agree to our Terms of Use and Privacy Policy.