VMworld 2016: VMware Scrambles for the Foundation 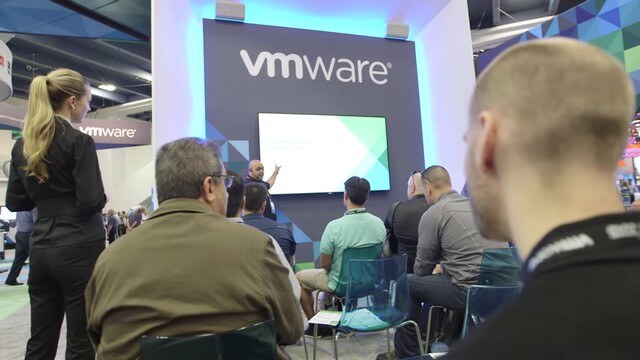 Over the last two years, VMware has rewritten and refined its entire strategy with regard to facilitating software workloads in the data center. It no longer believes the platform for one’s infrastructure must dictate the format for one’s workloads. It accepts the perpetual existence of containers and has joined the Open Container Initiative. It is moving forward with developing and marketing its Integrated OpenStack, first announced in February 2015. Essentially, VMware wants to facilitate whatever platforms, architectures, and methodologies you may require, so long as the ESX hypervisor and NSX network virtualization platform are directly involved.

All of which, in a strange way, makes VMware no longer the “VM company.” In another era, even the names “vSphere” and “vCenter” implied a data center universe where the virtual machine remained the center of gravity. Now, the realization is settling in across the industry in that new workloads will take new shapes, and that the new stack is certainly not the old one with a refreshed acronym and a revamped marketing campaign.

“We really see ourselves as an infrastructure provider. We don’t see ourselves being in what you might call the ‘application platform space,’” said Kit Colbert, VMware’s vice president for cloud-native apps, during an interview for The New Stack Makers podcast in January. Colbert defined that space as including PaaS platforms such as Cloud Foundry, container platforms such as Docker, and orchestrators such as Swarm and Kubernetes, and scalability components such as load balancers and high availability components.

“They’re more applications-centric,” he said, “and they know a bit more about the app architecture.

“We’re not trying to make a bet on any one of those application-level technologies,” Colbert said at one point. “We really want to be able to support them all. So our focus, and what we’re doing, is really enabling our infrastructure offerings to better integrate with those various application platform technologies.”

With a very broad brush, Colbert effectively excluded a huge chunk of the data center stack where it had positioned itself as the almost undisputed leader, as recently as 2012. And just two weeks ago, Gartner declared VMware as having successfully positioned itself as the leader in x86 server virtualization infrastructure technology. Not Docker, VMware.

In fact, Gartner still perceives Docker as a “tool” used by developers, not a platform used by operations professionals. In a footnote published just three weeks ago, Gartner asserted the container market was too new to make a sustained judgment about, compared to virtualization, though this state of affairs may change as soon as 2018.

“This year,” the firm wrote, “we continue to include containers primarily as technologies used (and managed) by infrastructure and operations customers, rather than containers and container tools used by developers. For example, the Docker framework is a developer-facing technology that leverages operating system virtualization capabilities (in Linux, and in the future, in Windows) — so we are not including Docker itself in this Magic Quadrant.”

The Three Keys, in the Real World

This is the state of affairs in which VMware, its partners, and their mutual customers find themselves, as they prepare to commence VMworld 2016 in Las Vegas this week. While VMware continues to realign itself with the technologies in place in the modern data center — the ones we stack on a daily basis here — it must simultaneously play to an audience that continues to perceive it through a 2006-model lens, where the biggest challenges remain on the order of whether ESX offers greater or less CPU utilization than Hyper-V.

Integration remains the name of the game. The world’s new workloads — including the microservices, cloud-native, and serverless varieties — must co-exist with the existing applications upon which industries continue to depend. Whoever wins the data center in the next decade, if anyone indeed does win at all, will have presented a winning formula for staging all workloads on all available infrastructures simultaneously and portably.

Open source engineering has resulted in two venerable challengers to vSphere’s dominance: OpenStack, in its original incarnation as an alternative hybrid cloud deployment mechanism for virtual machines; and the powerful tag-team of Docker-style containers and workload-agnostic orchestrators.  VMware’s present strategy has been to embrace these alternatives while maintaining the solidly entrenched positions of its hypervisor and network virtualization platform. Having vSphere and vCenter actively deployed are also nice, but certainly, they depend on the reliable presence of ESX and NSX.

But what does that mean to you?  The evolutionary strategies of all infrastructure platforms, including open source, will be determined by the moves VMware makes next. So throughout The New Stack’s coverage of VMworld this week, we’ll be focused on three key themes:

1. What will eventually become the universal scheduler for data center workloads? Last April, Intel announced a partnership with CoreOS and Mirantis that the company said will eventually lead to the production of a single component within OpenStack that schedules and stages both VMs and containers. Up until then, VMware had relied on its tight partnership with Intel to provide competitive advantages — for instance, tying Intel’s Xeon E7 series CPUs with vSphere for such features as high availability and fault tolerance. While this partnership was never portrayed as exclusive, Intel’s newest alliance suggests that the foundation of virtual infrastructure can, in the future, lie one layer beneath vSphere.

The foundation layer is extremely important. Licensing fees, or the lack of licensing fees, are tied to the ownership of the infrastructure components at the base of the stack. If a universal scheduler looks a lot more like Kubernetes than vSphere, VMware will have considerable difficulty implementing a growth plan that moves it outside what even Gartner describes as an overly saturated market. Look for VMware to make the case that it can implement universal workload scheduling, either now or soon, without having to develop such a system in concert with a CPU maker. To the extent that it does not make such a case for itself, look for the open source orchestration platforms to rush that much faster to fill the vacuum.

2. Can VMware produce virtualized storage that meets the needs of all workloads? Here’s the clincher in the debate over whether vSphere can stage truly containerized workloads along with VMs: Modern container-based apps need persistent storage volumes, in container form. VMware’s most highly evolved virtualized storage to date has been the virtual volume (vVol), which VMware describes as a “storage container,” although not from the Linux point of view. A vVol is another VM, constructed through a virtual disk file, designed for vSphere. Using a volume driver, vSphere can make a vVol available as a virtual SAN (VSAN). But you need vSphere to do it, and from VMware’s point of view, needing vSphere is a good thing.

But it’s a retrofit, and not the sort of one that microservices-based applications are actually looking for. VMware’s sincerity with respect to enabling all classes of workloads will be judged (by some analysts in particular, certainly by 2025) on account of how independent its process will be from vSphere. If VMware comes up with an open source methodology for making an image of stored data easily staged in both containerized and VM-based environments — again, simultaneously — then that will send a clear signal to customers that it’s interested in their own growth at least as much as its own, if not more.

3. Will VMware drive cloud-native application development in 2017, or concentrate on core infrastructure? There’s an argument to be made that the open source Cloud Foundry cloud platform software is doing quite nicely, thank you, without the direct involvement of its former parent company. But spinoff company Pivotal is still partnered tightly with its former co-parent (with EMC) in the production of what’s being called the “Cloud-Native Stack,” bundling Pivotal’s commercial Cloud Foundry with VMware’s Photon Platform. At the time this bundling was first announced, VMware said it would present a microservices framework for data centers where vSphere had yet to be introduced — the “greenfields” of the world.

VMware does offer a PaaS. But it’s one designed to keep VMware in the mix, even outside of vSphere. How much VMware continues to believe in the growth of microservices and cloud-native development will be directly measured by how much faith it publicly demonstrates, at VMworld, in the promise of this partnership, as well as other projects based on or around Photon Platform — despite anyone’s characterization of VMware as, first and foremost, an infrastructure company.

Check back here for The New Stack’s coverage of VMworld 2016 all next week.

Scott M. Fulton III leads the developer content team at Neo4j, and before this, was a 37-year veteran producer and editor, including for The New Stack, where he created the Context podcast. He produced the Scale blog for ZDNet, was...
Read more from Scott M. Fulton III
SHARE THIS STORY
RELATED STORIES
Why CIEM Plays a Key Role in Your Cloud Security Strategy Kinsing Malware Targets Kubernetes How Capital One Performs Chaos Engineering in Production Prometheus at 10: What's Been Its Impact on Observability? MicroK8s and Portainer Is The Easiest Way to Deploy an Application on Kubernetes
TNS owner Insight Partners is an investor in: The New Stack, Mirantis, Docker, Real.
SHARE THIS STORY
RELATED STORIES
What Trouble Awaits Cloud Native Security in 2023? 5 Best Practices for DevSecOps Teams to Ensure Compliance What TNS Readers Want in 2023: More DevOps, API Coverage Kubernetes Needs to Take a Lesson from Portainer on Ease-of-Use Kinsing Malware Targets Kubernetes
THE NEW STACK UPDATE A newsletter digest of the week’s most important stories & analyses.
The New stack does not sell your information or share it with unaffiliated third parties. By continuing, you agree to our Terms of Use and Privacy Policy.