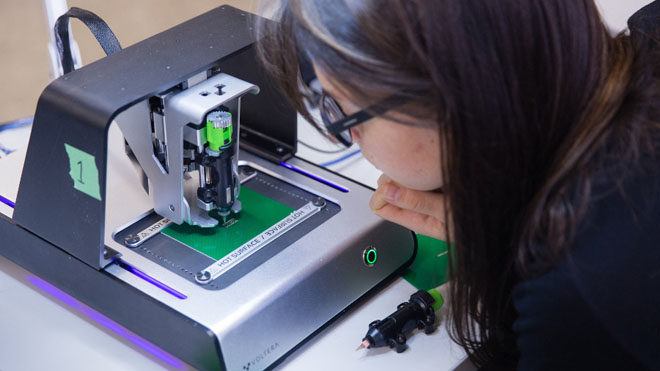 Makers and off-the-shelf hackers who like to fool around with the Arduino or Raspberry Pi are familiar with the inherent messiness of working with basic hardware components like breadboards, wires, little lights and sensors. Wouldn’t it be handy if there was a machine out there that could reduce some of those hardware headaches and print out a custom circuit board design in a matter of minutes?

Well, that’s the aim behind the Voltera V-One, a desktop 3D printer that accelerates the hardware design process by allowing users to rapidly prototype their circuit board designs quickly and painlessly. 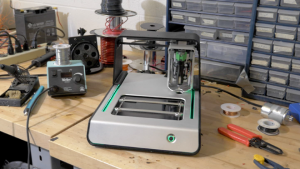 Designed by Jesus Zozaya, Alroy Almeida, James Pickard and Katarina Ilic, all engineering students from the University of Waterloo, Canada, the Voltera V-One was successfully crowdfunded earlier this year with $502,000, in addition to having recently received $30,000 from a Dyson Award.

The team was inspired to create the machine as an alternative to the time-consuming process of sending design files off to a third-party manufacturer, paying for shipping and waiting anywhere from days to even weeks before receiving a prototype. 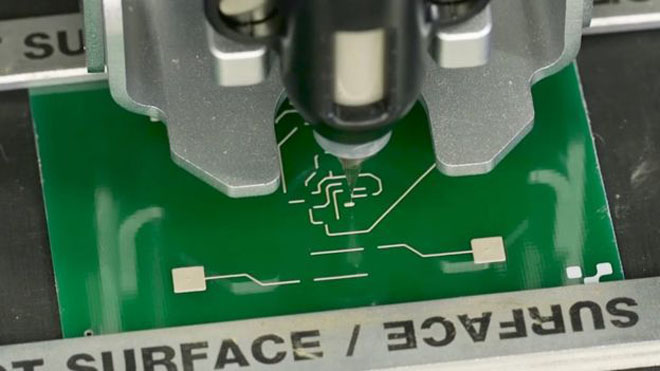 “We got the idea for a circuit board printer around the same time that 3D printers were starting to revolutionize the mechanical prototyping space, and wanted to create something similar for electronics prototyping,” says Almeida. “This eliminates the frustrations all hardware developers have faced with traditional fabrication processes and can cut development time from months to days.”

The printer — which is about the size of a laptop — uses swappable, magnetic print heads that contain either a conductive, silver nanoparticle ink or an insulating ink that are used to print two-layer circuits, using industry-standard input files and substrate materials. As Almeida explains, the Voltera V-One has a distinct edge over similar electronics prototyping machines:

The Voltera V-One goes beyond printing single layer circuits on paper. We’re the first to be able to print two layer circuits onto FR4 (the industry standard substrate) with a product of this size and cost (of around $2,000). But it doesn’t stop there… the printer is also cable of dispensing solder paste and baking the board to attach all the small components.

Not only would it be immensely useful to inventors working on a tight budget, Voltera’s potential for speeding up the hardware design process comes at an exciting time in the flourishing DIY-hacker and maker movements. This make-it-yourself renaissance is taking off, thanks to a growing abundance of affordable, off-the-shelf components available to hobbyists, as well as inexpensive, desktop machines that connect would-be makers to rapid prototyping technologies like 3D printing. Machines like Voltera can only bring more tinkerers into the fold, making the hands-on process easier and even more accessible. 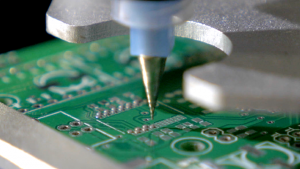 In any case, in an emerging Internet Of Things that may be populated by 28 billion devices by 2020, there are a plethora of opportunities for enterprising engineers, designers, developers and techies to further evolve the physical computing stack, creating unexpected inventions and services to solve real-world problems. To find out more or to pre-order, visit the Voltera website, and to get started on some DIY projects, check out our Off The Shelf Hacker tutorial series.