The Search for Life in the Universe: Water Flows on Mars 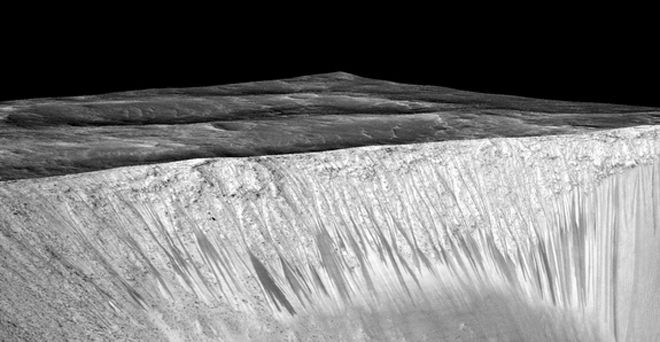 The long-held notion of Mars as a dry, arid place was shattered earlier this month when NASA scientists confirmed that liquid water flows on the red planet, opening the door to the possibility that there may be life on Mars.

Using data culled from an imaging spectrometer on the Mars Reconnaissance Orbiter (MRO), the scientists discovered traces of hydrated minerals within strange, dark streaks found on Martian slopes. These marks on the landscape seem to transform over time: darkening in colour during warmer weather and lightening or completely disappearing in cooler temperatures.

Scientists call these topographical curiosities Recurring Slope Lineae (RSL), and their ever-changing appearance seems to indicate the presence of liquid water, albeit with hydrated salts that lower its freezing point from 32 degrees Fahrenheit (0 degrees Celsius) to minus 94 Fahrenheit (minus 70 Celsius). The researchers believe this briny water is flowing just below the surface and creating the observed cycles of lightening and darkening RSLs. But not all streaks seem to have these salts, according to the researchers.

“We found the hydrated salts only when the seasonal features were widest, which suggests that either the dark streaks themselves or a process that forms them is the source of the hydration. In either case, the detection of hydrated salts on these slopes means that water plays a vital role in the formation of these streaks,” said Lujendra Ojha of the Georgia Institute of Technology, lead author of the study published in “Nature Geoscience.”

Ojha first detected these streaks back in 2010, thanks to images taken by the MRO’s High Resolution Imaging Science Experiment (HiRISE). The infrared “signatures” of specific chemicals picked up by the MRO’s imaging spectrometer seem to be made by a mix of hydrated minerals called perchlorates. Perchlorates can keep liquids from freezing even in the ultra-cold temperatures of Mars, allowing them to flow downhill to create these distinctive, sloping grooves in the Martian landscape. 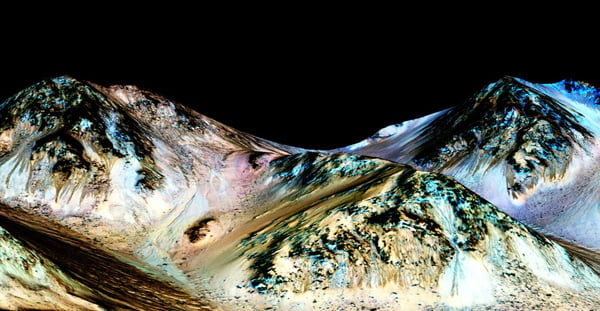 This image of dark, narrow streaks at Mars’ Hale Crater was produced by creating a 3-D computer model (a digital terrain map) from HiRISE data and then overlaying a false-color image over the land-shape model.

Scientists aren’t certain yet where this water comes from — it could come from underground aquifers, ice or condense from the atmosphere itself — but this is the clearest indication yet that there is currently liquid water flowing on Mars. This discovery has profound implications for the future of exploration on Mars.

For one, it would support the hypothesis that there might be some form of life on Mars —  micro-organisms, perhaps  —  though Ojha is cautious, noting that life as we know it would not survive in perchlorate brines. Nevertheless, the potential for viable water sources would make human survival on Mars much easier, whether for future exploration or even colonization. Even more useful is that certain perchlorates can be made into rocket fuel, possibly easing space travel between Mars and Earth.

In any case, our understanding of Mars has evolved in leaps and bounds during the last few years thanks to the collection of hi-tech tools aboard the MRO, which has given us a high-definition view of the planet and in-depth data like we’ve never seen before. What’s more is the MRO’s unprecedented data transfer capabilities, which allows it to transmit information three times faster than a regular broadband connection.

“It took multiple spacecraft over several years to solve this mystery, and now we know there is liquid water on the surface of this cold, desert planet,” said Michael Meyer, lead scientist for NASA’s Mars Exploration Program. “It seems that the more we study Mars, the more we learn how life could be supported and where there are resources to support life in the future.”

Read more over at NASA.