WebTV in 2022? Vintage Tech Enthusiast Shows How on YouTube

Thanks to a few dedicated hobbyists, soon you will be able to surf the internet on a cathode-ray tube television just like it was 1998.
Dec 4th, 2022 6:00am by David Cassel 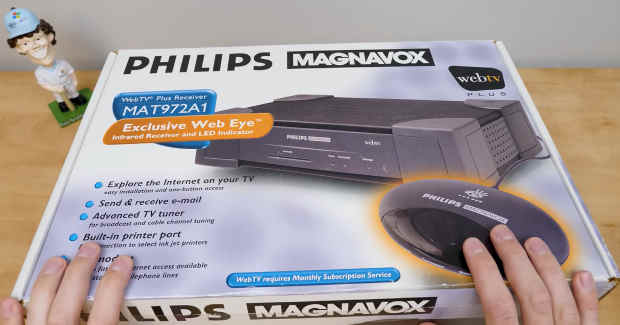 The name WebTV conjures memories of the web’s earliest days. Vintage tech enthusiast “Michael MJD” remembers the device as “the thin-client platform from the mid-to-late ’90s that brought that new-fangled World Wide Web thing to the comfort of your living room” on your TV. It debuted in 1995 and was purchased by Microsoft in 1997.

On his YouTube channel, Michael unboxed a WebTV from 1998, hooked it up to his own TV — and began using it to surf the web in 2022.

Of course, this miracle was accomplished with a little help from a community of modern-day WebTV enthusiasts who are keeping the experience alive, Michael tells his audience. “Even though Microsoft shut down the service that made WebTV and later MSN TV boxes work back in 2013, there’ve been some attempts to create custom servers to get a little bit of functionality out of these boxes in the modern day.”

He gives a shoutout to “jarhead” and “nitrate92” for enabling this trip back in time — two enthusiasts serving out the actual bytes of the original WebTV welcome screens to modern-day users. These carefully recreated screens have been lovingly extracted from the hard drives of previously used WebTV units, and though their server isn’t yet available to the general public, they gave Michael an early preview.

And thanks to their efforts, Michael was able to take his audience along on his adventure, showing viewers exactly what it was like to experience the internet back in 1998 through the decidedly consumer-friendly interface of WebTV.

Often, WebTV feels exactly like what it was: an attempt to mass-market internet access delivered through your TV set. It let people without a personal computer or a monitor access basic internet functionality — and not just web browsing, but also real-time chatting, discussion boards, and even sending email and building a web page. They just had to pay a monthly subscription fee to access the servers that formatted content for their TV — about the same price as what you’d pay your local internet service provider.

Except, WebTV still surfed the web over your home phone line. So right from the start, recreating its phone-based functionality took some tinkering. Michael first had to acquire a Dell NW147 modem, then connect it to a Raspberry Pi with a special piece of software installed.

That “Dream Pi” software enables Sega’s vintage, late-’90s “Dreamcast” consoles to connect to modern-day servers to keep on playing, and Michael installed a modified version for connecting to WebTV servers. Among other things, Dream Pi plays an audio file of a dial tone that plays on a loop and basically tricks the WebTV box into thinking it’s connected to a live phone line.

Then Michael also had to build his own line-voltage inducer, “to actually send proper voltage over the phone line.”

“It’s honestly really simple to do,” he tells his audience. “You just have to take a phone cable and cut the outer jacket open, find one of the ring wires, then you basically connect the positive and negative ends of a DC transformer … and connect them up.”

But finally, Michael arrived at “the moment this WebTV box has been waiting for for the last 25 years.” He cut the seal on a 24-year-old, never-been-opened WebTV box. Besides the cables and a “splitter” phone jack, Michael finds the all-important WebTV remote which, among other things, toggled between “TV mode” and “WebTV mode.” But finally, Michael slid out his Styrofoam-encased prize in all its glory — a charcoal-black Phillips Magnavox WebTV unit.

Since 25 years had passed, Michael didn’t bother mailing in the enclosed warranty card.

The one thing it didn’t contain? A keyboard. (WebTV keyboards were sold separately as an accessory.) Michael argued sardonically its absence would make this “a more authentic experience,” recreating the pain of having to select each letter, one by one, after scrolling to it on an on-screen keyboard. Even more frustrating: The default setting wasn’t QWERTY, but a keyboard where the letters just appear in alphabetical order from A to Z. 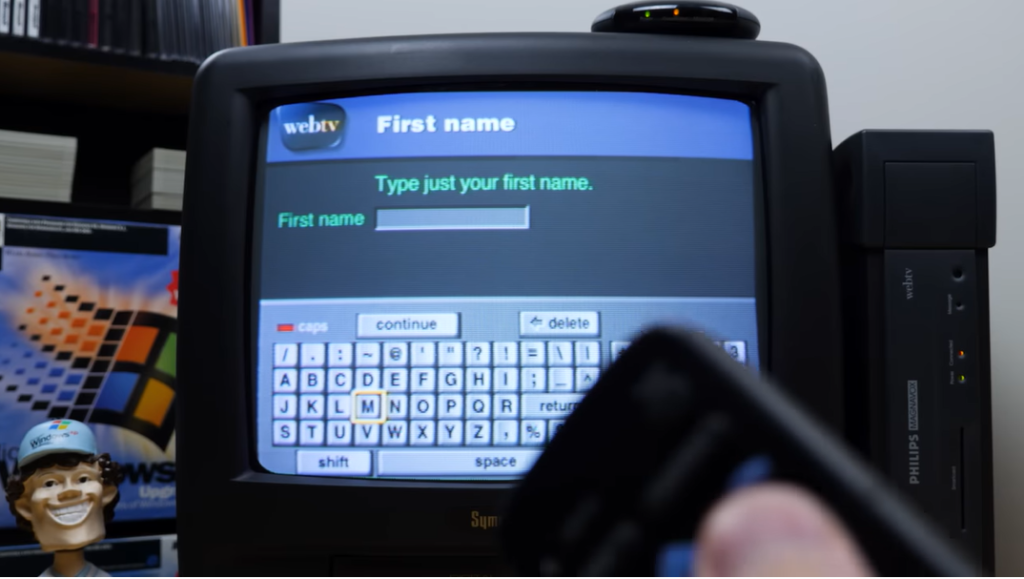 By the end of the video, Michael is admitting that he regrets not buying a keyboard.

“You would probably need to have the keyboard to actually go through the process of creating a website without wanting to throw your remote at the TV.”

It wasn’t always instant gratification. Dialing up a server over your phone line would first trigger an on-screen sequence that would be familiar to any WebTV owner — a two-color image showing a yellow highway traveling toward a yellow city skyline, accompanied by some peppy electronic music.

Michael eventually makes a successful connection to the new custom server, which still magically recreates the original sign-up procedure, displaying a monthly subscription fee and a service agreement, as well as prompting users to type in an account name. (Originally, this would become your email address at WebTV.net, but now it’s just an account name for this particular server.) An update from Jarhead promises, “You’ll hopefully be able to send and receive mail outside of the server soon, as well.” And there’s also a new custom Terms of Service for the service, written in January 2022.

Now there’s a subscription price I can get behind! pic.twitter.com/JS9Sy2cv8G

They’ve also recreated the original welcome screens, even a screen explaining the original WebTV’s interactive TV listings — and one explaining how to use WebTV to program your … VCR. (“Find a show in this week’s TV Listings, then choose Record,” explains the screen. “WebTV does the rest.”) 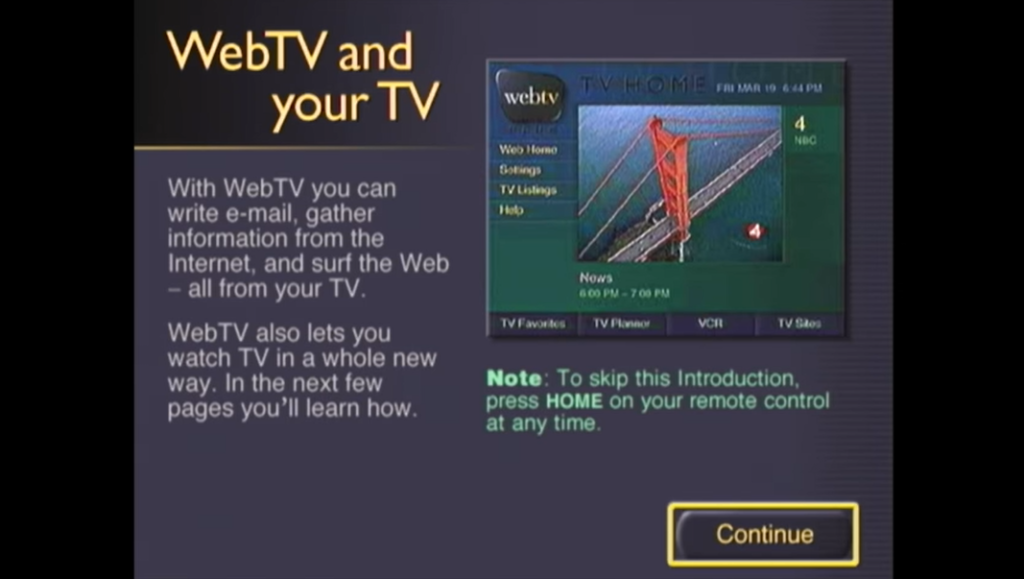 Although, because Michael’s TV isn’t connected to a cable hookup or an over-the-air antenna, its TV-watching mode just displayed static in its picture-in-a-picture window. 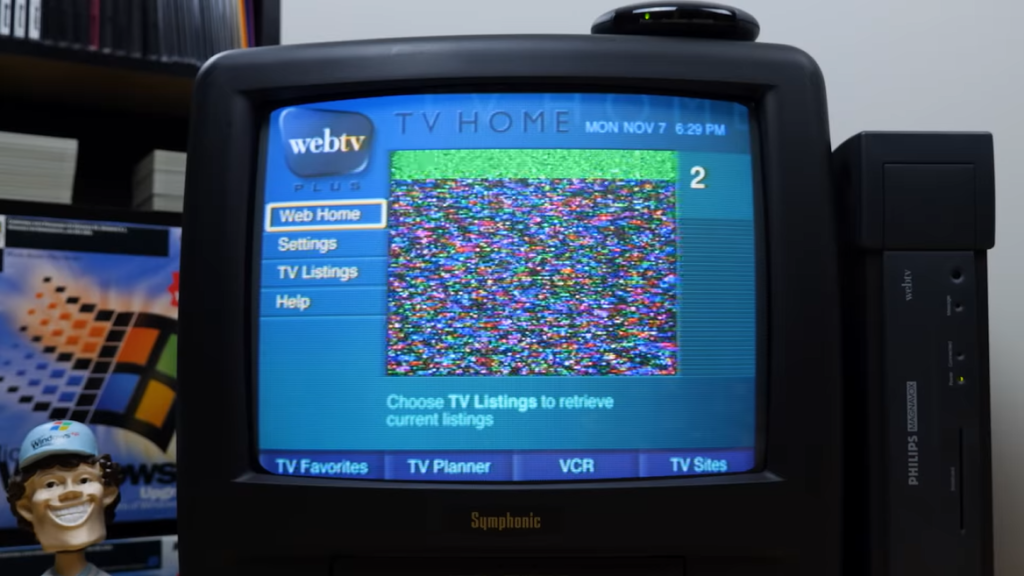 But soon he’s arrived at the WebTV home screen, offering all the same icons from 1998. Microsoft’s old texting service MSN Messenger has been revived by a project called Escargot, and it’s also now accessible through this WebTV server. Michael demonstrates this using his own Messenger account. The server also has a working connection to Libera Chat IRC, a recently founded IRC (Internet Relay Chat) network for FOSS projects.

There’s more to see behind the Community icon. Originally, it brought up weather and other local information, and somehow that’s all been faithfully recreated (for the town of Redmond, Washington). This includes a link to the top search engine of 1998 — Yahoo, although most of the page’s other links don’t work. 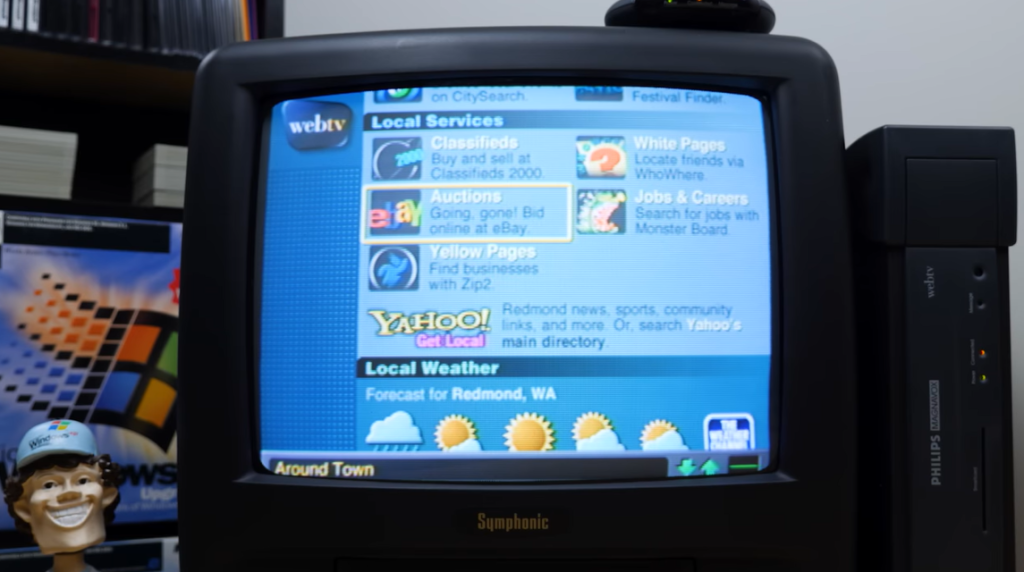 There’s also access to discussion forums, where one of the topics is MIDI music files, and another forum draws its messages from the Usenet newsgroup “alt.discuss.webtv.hacking,” part of an ongoing push to connect all the discussion forums to their current Usenet equivalents. 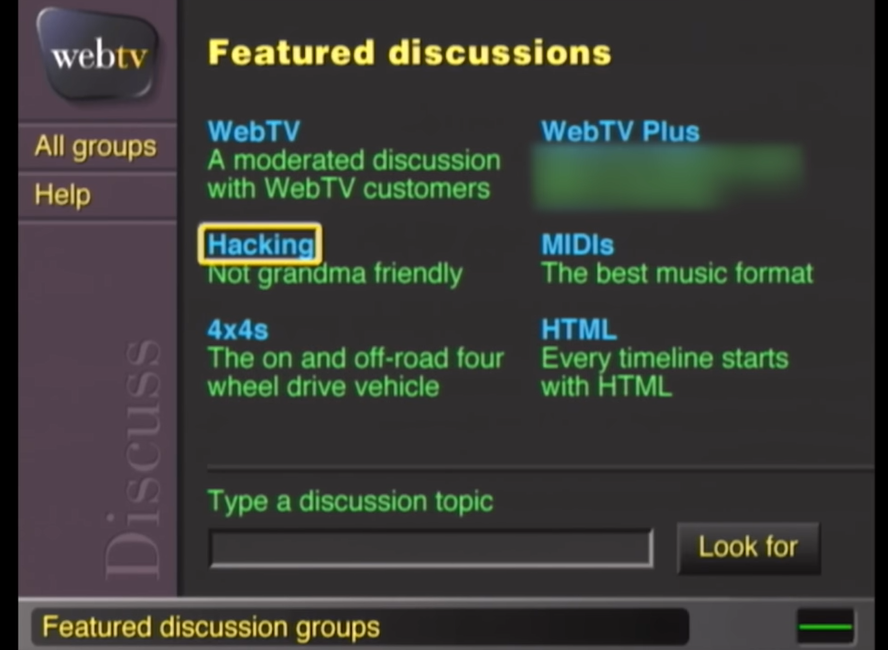 There’s even a tool for creating your own web page. 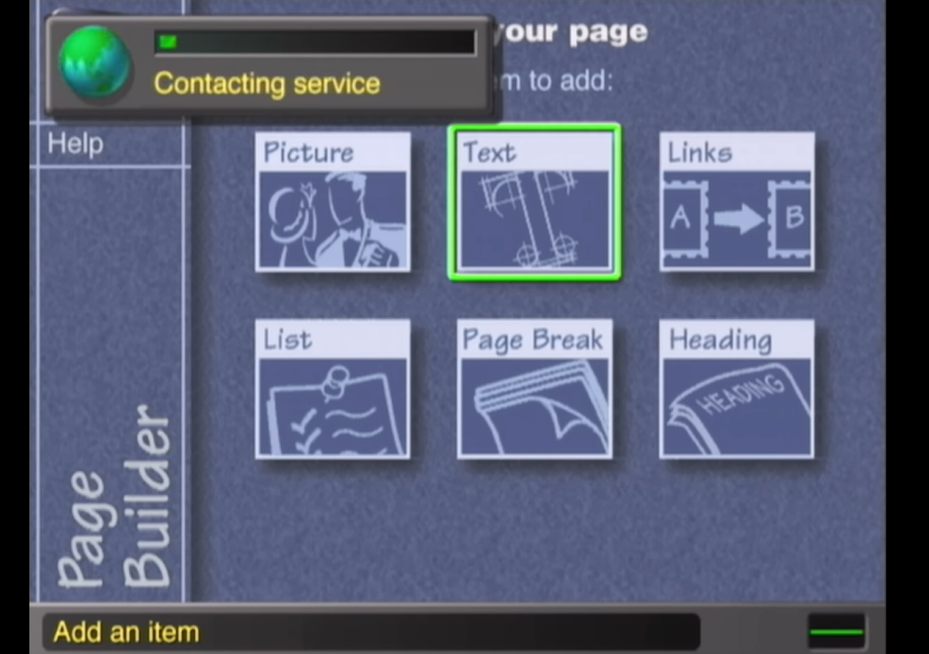 And here, much of the tool’s original functionality has been preserved by the revival team, letting users select from a pre-designed template. Soon Michael has created his own simple web page in this modern-day WebTV mini-community.

It’s a minor miracle how much of the functionality survives today. The Search icon pulls up an input window next to a banner proclaiming proudly that it’s “Powered by InfoSeek,” though that search engine closed 23 years ago. But don’t despair. This custom server swaps in search results from FrogFind, a plain-HTML wrapper for DuckDuckGo search results specifically designed for vintage computers. FrogFind’s search results are also used at TheOldNet.com, a site using the Internet Archive’s API to pull up old versions of web pages (and strip out incompatible JavaScript).

So Michael pulls up TheOldNet.com on WebTV’s browser just to prove that even browsing the web is still possible. 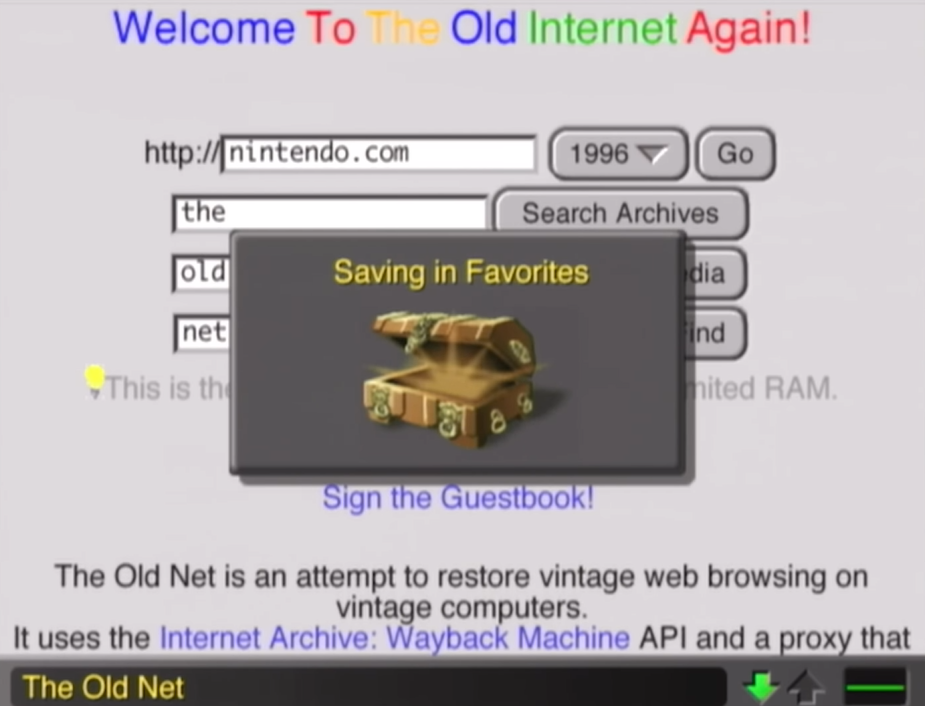 But here’s where the fun starts. Since the content is passing through a home-brewed WebTV server, “I’ve seen some of these boxes where they’ve modified the text with some pretty hilarious stuff,” Michael says with a laugh. For example, the Shopping page now advertises, “Buy one, get 0% off” on the purchase of a WebTV receiver. And clicking that link brings a popup promising, “You will get your info stolen. Guaranteed, or we’ll personally take your money instead.” 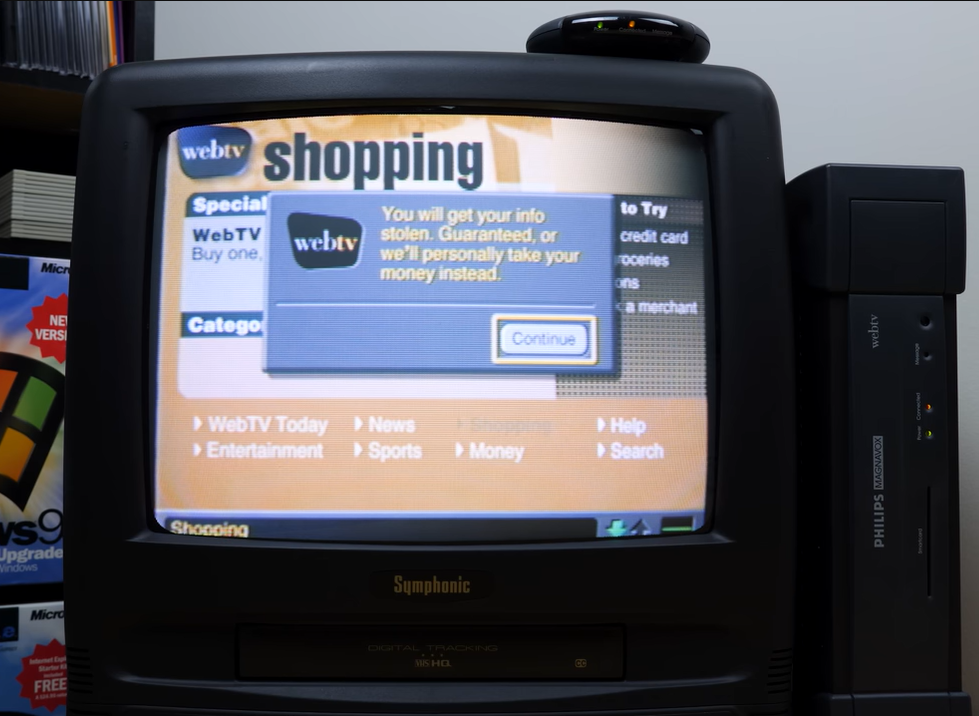 And though the text on the right promises “Things to Try,” actually selecting its links pulls up surprisingly contrary responses. (Like “no,” “stop it,” and “stop trying to access 20-year-old sites.”) And the link urging you to “Get a Credit Card” even brings up a popup saying, “That’s a terrible idea. I don’t know what that guy’s on about.”

And the WebTV Today link is now an update log for the revival project. 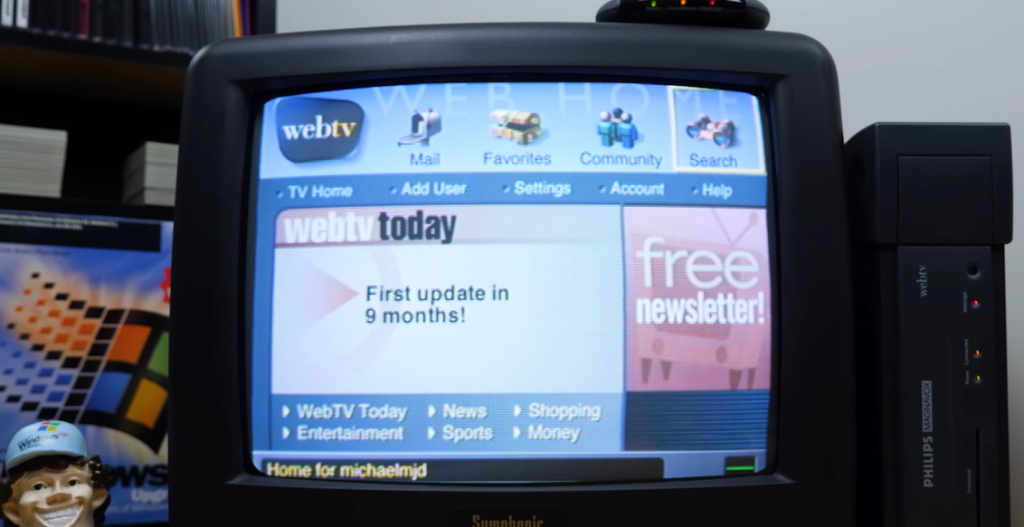 Of course the “Get horoscopes” link fails to connect to webtv.astroadvice.com. (Though, Archive.org can show you what it looked like in 1999.) 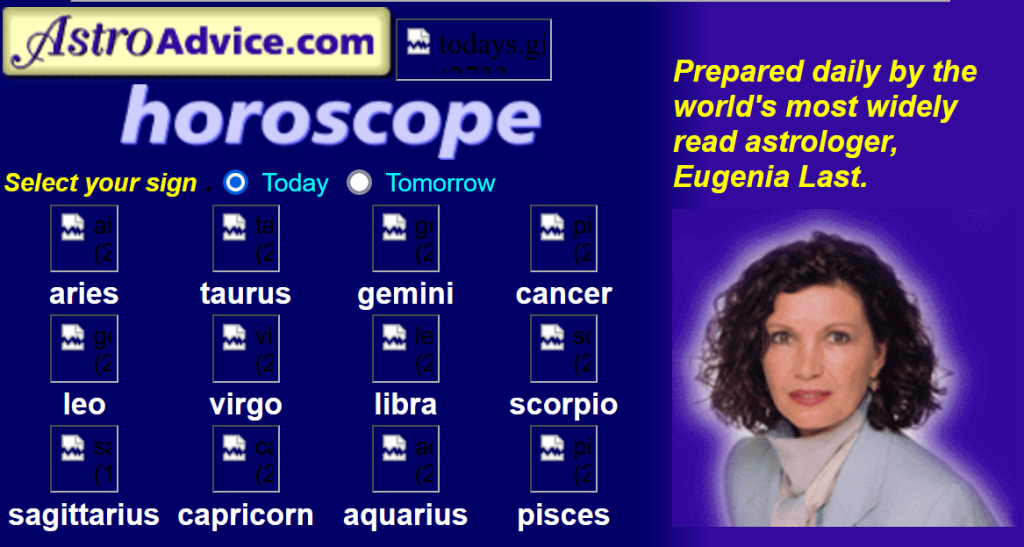 Screenshot of AstroAdvice.com circa 1999 (via Archive.org)

But the Today in News section actually does pull in up-to-date news, sports, and entertainment headlines — all taken from today’s edition of “The New York Times” (showing the simplified vintage-friendly results from FrogFind).

However, the top Money story is unavailable, replaced instead by a placeholder word from the revival project team: “Uh.”

Doom with a WebTV Remote

JarHead even provided Michael with a hard disk image with two late-’90s games — “Doom” and “You Don’t Know Jack” — that were only available to an elite group using the DISH TV satellite service with its special WebTV bundle. “Back sometime in the late ’90s/early 2000s, a group of people in the WebTV hacking scene were able to get into an internal WebTV service called TestDrive,” Michael explains, which had stored all the files for the two games and somehow allowed them to be smuggled out to year 2022. 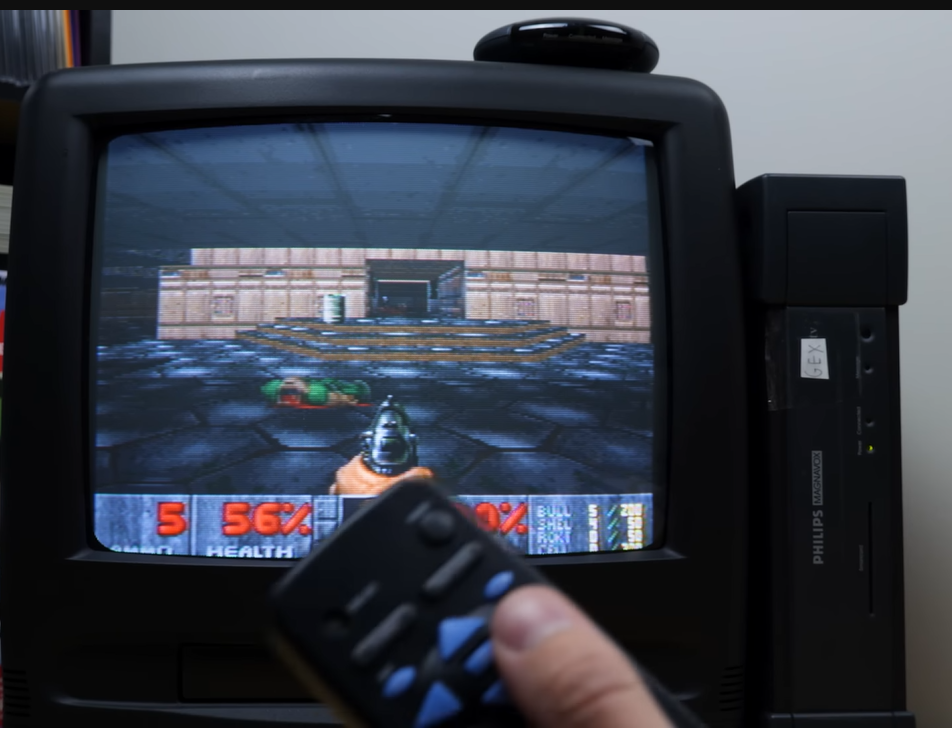 In the end, Michael admits it was agonizingly difficult to play Doom using only a WebTV remote. But “Even in its current state, this is an incredible revival project,” Michael gushes.

And even though it’s been nearly a decade since anyone’s been able to officially surf the internet with a WebTV, “I think it’s going to be really awesome to see this thing get publicly released.”

SHARE THIS STORY
RELATED STORIES
Java's James Gosling on Fame, Freedom, Failure Modes and Fun Why 'Explainable AI' Can Benefit Business Why Your Code Sucks: Common Excuses for Bad Programming Golden Paths Start with a Shift Left 2022 in Review: AI, IT Armies, and Poems about Food
TNS owner Insight Partners is an investor in: Unit.
SHARE THIS STORY
RELATED STORIES
Entrepreneurship for Engineers: Building for Customers’ Love Why 'Explainable AI' Can Benefit Business It Happened to Me: How I Suddenly Owed AWS $13,000... Platform Engineering Won’t Kill the DevOps Star A Leg-endary Year: Top 5 Internet Technology Stories of 2022
THE NEW STACK UPDATE A newsletter digest of the week’s most important stories & analyses.
The New stack does not sell your information or share it with unaffiliated third parties. By continuing, you agree to our Terms of Use and Privacy Policy.