This Week in Numbers: Open Source Development at Large Companies 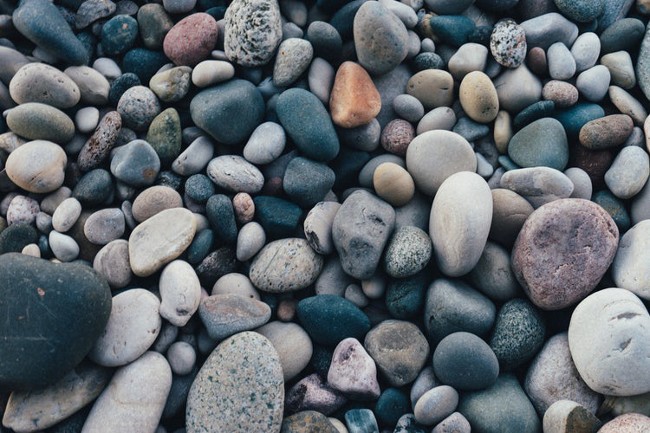 How many developers should a large IT company be willing to devote to building and maintaining open source software projects? Below, we’ve collected the percentages of developers dedicated to open source at 12 of the largest IT companies. Be careful of drawing conclusions, however.

You may think that the percentage is predictive of corporate success. We can’t make any definite relations there. Nor can we show a direct link between profits and open source adoption, data-driven decision-making or DevOps practices. Despite efforts by many others, we’re skeptical of studies that show a direct, causal relationship between these factors and actual company revenue. There are just too many factors to account for. Instead, The New Stack has analyzed some data and will let you draw your own conclusions: 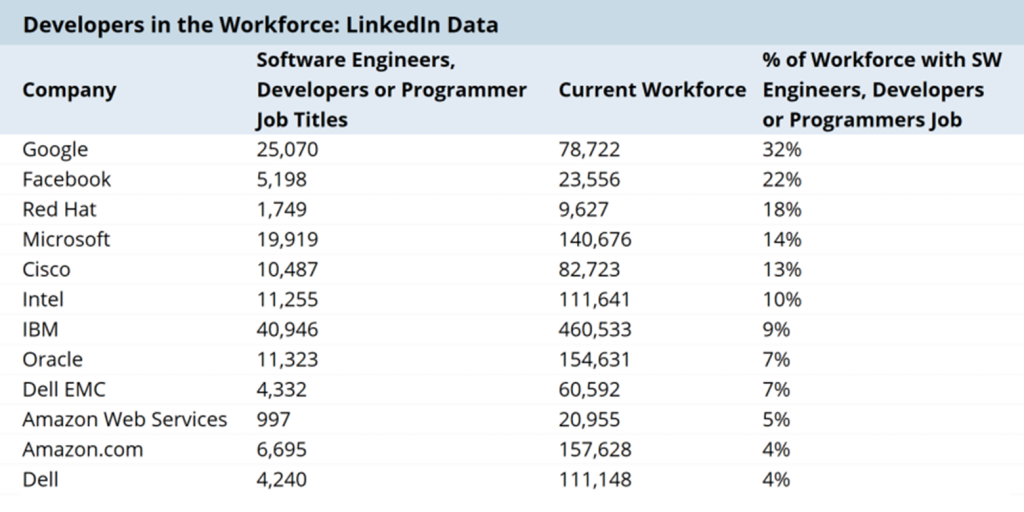 Using LinkedIn data, we profiled 12 of the largest tech companies’ workforces to determine how many developers they deploy. IBM towers over over other companies, with 40,946 developers, software engineers and programmers; with Google comes next with 25,070. However, people in this job role only account for 9 percent of IBM employees versus 32 percent at Google.

Not all STEM (science, technology, engineering and mathematics) captured by the LinkedIn worker data are developers though. Looking at job role, Amazon Web Services is the leader with 53 percent of its employees in engineering or information technology.

In terms of percentage of its employees that are engineers, Intel comes in at #1 at 44 percent, followed by Google (35 percent), AWS (35 percent) and Red Hat (33 percent).

Last week’s post noted that at least based on the number of developers using a corporate email address, IBM and AWS badly trailed Microsoft and Google in terms of employees contributing to a GitHub hosted project. Others noted that this data also appeared to under-represent Red Hat and Pivotal’s place in the open source community. So, we decided to use the LinkedIn data to get a different perspective.

In fact, the number of GitHub contributors identified accounts for 25 percent of all of Red Hat’s developers, as compared to 7 percent at Microsoft. Lower on that list is Amazon.com at 2 percent, with Intel, IBM and Oracle even lower. For Intel, IBM and Oracle, we believe that many of their developers are working on proprietary projects or are hands-on helping their clients’ customized deployments. Note that we did not mention AWS because we can’t distinguish between their developers and those working for the larger company.

The LinkedIn data clearly delineates between people working for AWS and the rest of the company, showing that 11 percent of the company’s employees work for the cloud provider. This aligns closely to the 10 percent of total sales it accounted for in the latest quarterly report. Of course, AWS employees generate a much greater percentage of the Amazon’s profits, but that is another story. As stated above, AWS has the greatest percentage of engineers and IT workers. Interestingly, Amazon.com has the lowest.

This makes sense because the latter is a retail and logistics company. Yet, just based on based on job title, the percentage of developers at AWS and Amazon are similar – 4.8 percent vs 4.3 percent. We believe that this is because AWS job titles are more associated with their business-related function. 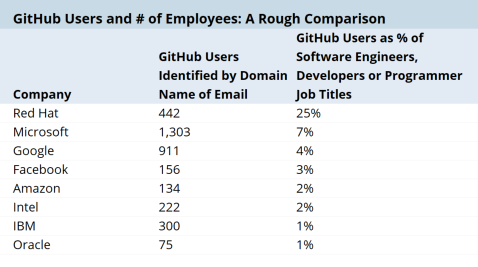 Fewer companies are in this table because it only uses GitHub data referenced in an article by Google’s Felipe Hoffa.

Google, Microsoft and Red Hat are sponsors of The New Stack.

Lawrence has generated actionable insights and reports about enterprise IT B2B markets and technology policy issues for almost 25 years. He regularly works with clients to develop and analyze studies about open source ecosystems. In addition to his consulting work,...
Read more from Lawrence E Hecht
Share this story
RELATED STORIES
PyTorch Takes AI/ML Back to Its Research, Open Source Roots How to Make Git a Developer’s BFF Adobe Buys Figma: What Does this Mean for Web Standards? IT Pros Trust Open Frameworks and Clouds Over Third Parties Baseten: Deploy and Share ML Models with Python
Share this story
RELATED STORIES
How Can Open Source Sustain Itself without Creating Burnout? Why Developers Need Passwordless Google Inks Deal with NIST to Boost Open Source Chips All about Zombie, an Open Source Effort to Mask Metadata Can Masking Metadata Boost Open Source Security, Diversity?
THE NEW STACK UPDATE A newsletter digest of the week’s most important stories & analyses.
We don't sell or share your email. By continuing, you agree to our Terms of Use and Privacy Policy.