This Week in Programming: The Bright Future of Not Dealing with Servers 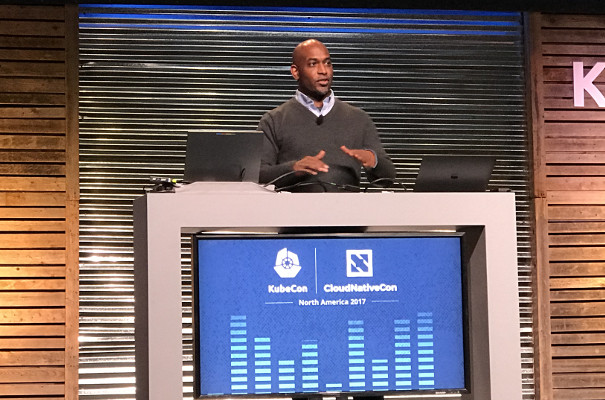 This week was KubeCon here in Austin, and I took a few minutes to stop by the exhibition floor, where I saw several examples of the wonderful abstraction of all that stuff I don’t want to really deal with. That is, easy-to-use Web-based interfaces that handle much of the nitty gritty — deploying containers, installing languages and compilers and dependencies, spinning up servers, and getting code quickly online and running — without so much as a single error code rabbit hole search or local installation. And it all comes with those added benefits of containers that you’ve heard so much about — scalability, code reuse and sharing, platform independence, easily-bundled dependencies, you name it.

I’d mentioned KubeCon and Kubernetes to a few programmer friends earlier in the week and their reaction was a mixture of “that’s too new to be useful” and “who uses that?” And I understand that, especially for the developer who works for a company and has a team of people handling the operations side of things, but I can’t tell you how many times now I’ve gone to learn something new programming-wise and run into the same obstacles — days and days of dealing with obtuse OS errors during installation, missing dependencies, and so on. Often, these obstacles were so great that by the time I finished dealing with them, I’d lost the zeal to continue on with my original inspiration.

"OK Google… create a #kubernetes cluster." @kelseyhightower shows us Kubernetes the easy way in his keynote at #KubeCon #CloudNativeCon pic.twitter.com/FNxisbRMB6

These days, however, I’m starting to see the light on the horizon, and it looks a lot like Kubernetes (and other container platforms) and the various systems built on top — from OpenShift to Glitch to CodeAnywhere. I mean, for many of you, it’s already blinding daylight, but for me, the sun looks just about to rise — this whole cloud-native thing is looking better and better by the day for the individual developer. While I understand the excitement about much of this from the corporate, bottom-line, efficiency end of things, a lot of this gets me excited for people who just want to make things and don’t want to get bogged down in days of other complications to get there.

If any of that sounds enticing, you may want to check out our coverage of everything that happened at KubeCon this past week, which we’ll continue to update in the days ahead. For now, let’s take a look at what else has happened in the past week in the world of programming languages and everything developer-related.

This Week in Programming Numbers and Thoughts

Mike is a freelance writer, editor, and all-around techie wordsmith. Mike has written for publications such as ReadWriteWeb, Venturebeat, and ProgrammableWeb. His first computer was a "portable" suitcase Compaq and he remembers 1200 baud quite clearly.
Read more from Mike Melanson
SHARE THIS STORY
RELATED STORIES
Rethinking Java @Scheduled Tasks in Kubernetes 4 Ways to Use Kernel Security Features for Process Monitoring What Is the Docker .env File and How Do You Use It? PromCon 2022: Why Prometheus Had to Change Why Your Kubernetes Ship Is Sunk without Machine Learning
TNS owner Insight Partners is an investor in: The New Stack.
SHARE THIS STORY
RELATED STORIES
DevOps: Kubernetes Help Desk or Self-Driven Innovation? Install Minikube on Ubuntu Linux for Easy Kubernetes Development Swarm, a User-Friendly Alternative to Kubernetes Data, Analytics and AI: What Will Happen in 2023 Kubescape: A CNCF Sandbox Platform for All Kubernetes Security
THE NEW STACK UPDATE A newsletter digest of the week’s most important stories & analyses.
The New stack does not sell your information or share it with unaffiliated third parties. By continuing, you agree to our Terms of Use and Privacy Policy.