This Week In Programming: Go 2.0 and the Vexing Question of Complexity 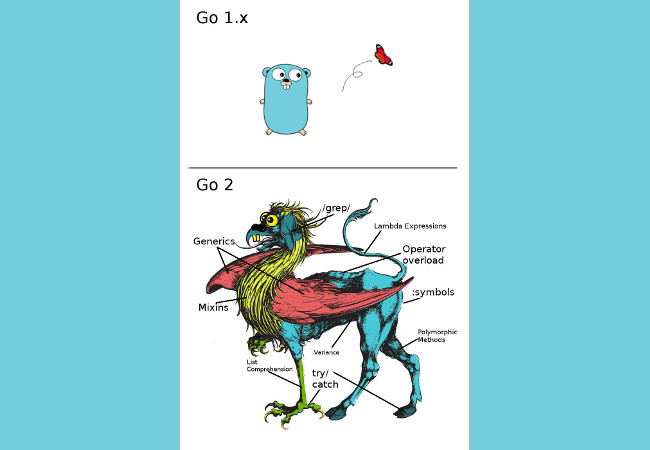 Although Go 1.9 has yet to be released — it is expected to drop this month — most have moved their focus on to Go 2.0, after it was announced earlier this month at GopherCon. See the image above, which popped up on Reddit, for one interpretation for how some expect Go 2.0 to differ from the classic Golang that users have come to know and love for its simplicity. It seems that the community has the upcoming changes on the brain this past week.

At the heart of the controversy with Go’s evolution is whether or not Go 2.0 should support generics, as discussed here by Go aficionado Dave Cheney. Another blog post on the topic offers a TL;DR on the topic that sums it up nicely: “(1) lots of other languages have generics (2) we’re pretty sure they’re useful (3) but they come with associated costs and complexity and we’re not sure they’re worth it.”

This revered simplicity is at the core of the conflict, but as Go co-creator Rob Pike once noted in a talk, simplicity is complicated:

As we noted when we first looked at the announcement earlier this month, the community is “just as responsible for shaping the release of Go 2 as the Go team itself” and it looks like it’s knee deep in discussion about the future of Go.

News From Around the Web

Mike is a freelance writer, editor, and all-around techie wordsmith. Mike has written for publications such as ReadWriteWeb, Venturebeat, and ProgrammableWeb. His first computer was a "portable" suitcase Compaq and he remembers 1200 baud quite clearly.
Read more from Mike Melanson
SHARE THIS STORY
RELATED STORIES
CEO Raj Dutt Interview: The Grafana Experience Will Change Gitpod Battles 'It Works on My Machine' Syndrome with Its CDE How Web Tech Got This Way and How It May Evolve in the Future How to Build Your Own Decentralized Twitter Entrepreneurship for Engineers: Painkiller or Vitamin?
SHARE THIS STORY
RELATED STORIES
How Boeing Uses Cloud Native Rust and the OS, the Web, Database and Other Languages Entrepreneurship for Engineers: Painkiller or Vitamin?  How to Build Your Own Decentralized Twitter Grafana Shows New Observability Projects at ObservabilityCON
THE NEW STACK UPDATE A newsletter digest of the week’s most important stories & analyses.
The New stack does not sell your information or share it with unaffiliated third parties. By continuing, you agree to our Terms of Use and Privacy Policy.