This Week in Programming: Innovation Comes for Us All 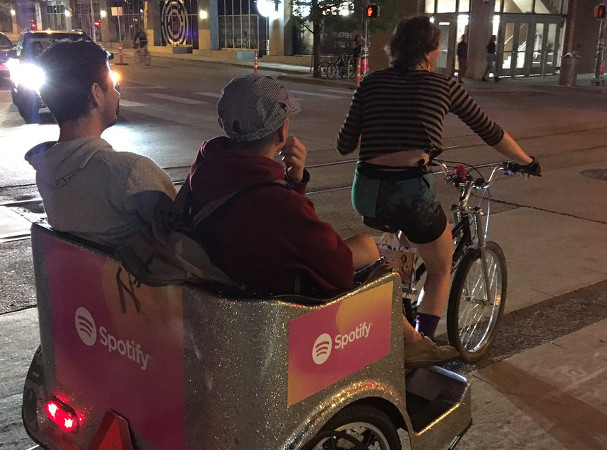 Innovation: It comes for us all, at some point or another.

In my particular experience, that point came with the arrival of ridesharing companies. You see, I’ve spent the better part of the last six years working on and off as a pedicab driver here in Austin, Texas. And by “driver,” I mean pedaler, operator, or whatever other term would convey that I was the human behind this completely human-powered mode of transportation, which comes in the form of a giant tricycle that holds (legally in Austin) up to three adults and however many children can sit on a lap. It was my legs that, at times, conveyed more than a half ton of cargo around the streets of Austin.

Yes, I’ve been told more than once that I have “the calves of LeBron James” and been referred to as “Quadzilla.”

Now, pedicabs in some form or another have been around since the late 19th century, when they were invented in Japan. Originally called rickshaws, they were two-wheeled vehicles pulled by a person running in front. Then in the early 1900s, the bicycle component was added and the “pedicab” was born. Pedicabs have been a mode of transportation in countries worldwide ever since, even finding a niche alongside automotive competition by providing a much closer, open-air experience of the world around you. In Austin, they were particularly popular.

Perhaps the conditions here made it what it was — barely two months of winter and a relatively small downtown area — but Austin had grown to be one of the top pedicab cities in the country, especially in terms of completely human-powered, non-motorized pedicabs. By 2013, the number of registered pedicabs here had swelled to just over 500 and for years it was a rather profitable endeavor for the average pedicab driver. Downtown Austin on any given weekend night was the scene of swarms of pedicabs careening through the streets, their passengers appropriately hooting and drunkenly “woo” ing as they called for their drivers to go faster than the numerous pedicabs around them.

And then Uber and Lyft arrived.

It happened slowly at first, as ridesharing companies gathered their footing, but the change was obvious. Where once we had helped tourists find their way from the hotel to the show down the street, we now sat idle, obsolete. We waited outside, only to see seemingly zombified people emerge from the lobby, smartphone in hand as they swatted us away. We waited outside bars and on corners and by restaurants, all for naught. Where once they searched for the familiar yellow taxicabs and, when none were in sight, they begrudgingly decided to actually have some fun and hop in a pedicab, now locals and tourists alike opted to wait for the cheaper and more convenient option that ridesharing delivered.

In 2016, though, the Austin city council passed some new rules for Uber and Lyft, requiring the same licensing process for its drivers that were required for the local taxi, limousine and pedicab drivers. Long story short, Uber and Lyft forced a vote by petition and Austin voters rejected them. The companies decided to leave town immediately, leaving both their drivers and passengers without an alternative.

Quickly, new ridesharing companies that were willing to meet these requirements came to town to fill the void, but for the pedicabs, it was practically like the old days again. While ridesharing companies were still there for longer rides, they didn’t have the familiarity and immediate name recognition of Uber and Lyft, and we snuck into those seconds of confusion and snatched up our fares. For nearly one whole year, it stayed like that, until the Texas legislature stepped in and overruled local regulations, paving the way for Uber and Lyft’s return.

The thing was, during that grace period, no real effort was made to innovate the local pedicab industry to stay competitive. Ridesharing services outperform pedicabs in numerous ways when it comes to providing a transportation solution. Whereas pedicabs previously competed with taxicabs, they still served a niche. Taxis weren’t always present and weren’t easily summonable by a smartphone app. With Uber and Lyft, a super cheap ride is often just seconds or minutes away. Pedicabs, on the other hand, are not cheap by virtue of the labor being put into each ride, but they are able to weave through traffic jams and provide much faster rides in times of congestion than any automobile. And though it has been attempted (and failed) there is no unified ride-hailing app for pedicabs. While the app is a solution that has revolutionized taxis (the term “ridesharing” really is just disingenuous), it simply hasn’t found its way with pedicabs.

So what’s the solution, you might wonder? Possibly none. Perhaps there is no innovation that could make pedicabs able to compete with “ridesharing.” I have little doubt that pedicabs will be used less and less as a traditional transportation option when people have a more convenient and cheaper solution readily available at their fingertips. Or maybe it’s all about context and pedicabs need to find the proper market and downtown Austin isn’t it anymore. After all, any big festival and most big sporting events are still big money makers for pedicab drivers. Places where cars just don’t fit.

Just recently, a pilot program is has begun for pedicabs to get “pedal assist” motors, with the thought that this will increase the area that pedicabs could potentially serve while potentially decreasing cost, as theoretically riders will be willing to work for less as their effort will be less. The reality is likely that the costs to rent pedicabs will actually increase, as maintenance costs increase with the arrival of complicated and expensive motor and battery systems, meaning prices will remain unable to compete with the super low, VC-subsidized costs of an Uber or Lyft ride. Or maybe not. Maybe rides will be cheaper and, though not fully human-powered anymore, pedicabs can play up their eco-friendliness, providing fast rides that speed through traffic jams, and find their niche. Either way, innovation has arrived, market forces have changed, and pedicabs will either have to adapt or pedicab companies will be going out of business in droves.

But maybe this is just the way of things, and we need to get used to it happening more and more. Maybe the solution isn’t to try to hold on to the way we’ve always done things, but to look at the good parts of that and try to bring them to the new systems.

The tale of pedicabs — that of old technology versus new — may be one of warning for developers and other high-tech workers, as well. Right now, developers are paid a good wage and are in demand, as their skills are specialized and require the investment of time and training. But those days may be coming to an end soon as well, with the arrival of low-code programming solutions and even computers trained to program themselves. Similar threats exist for many tech jobs, as servers and databases are moved to the cloud and “as-a-service” becomes the new “they outsourced my job overseas.” Some estimates predict that nearly 40 percent of jobs in the U.S. could be replaced by automation in the next 15 years. Although these high tech jobs are not super high on the list — it’s likely the folks running the cash registers and building things in factories who have the most to fear in the immediate future — innovation comes for us all and it may not be too soon to begin thinking how we can adapt.

As for me, I’ve hung up my shoes for now. Innovation came for me and I just couldn’t compete.