The Week SETI Heard Something from Space 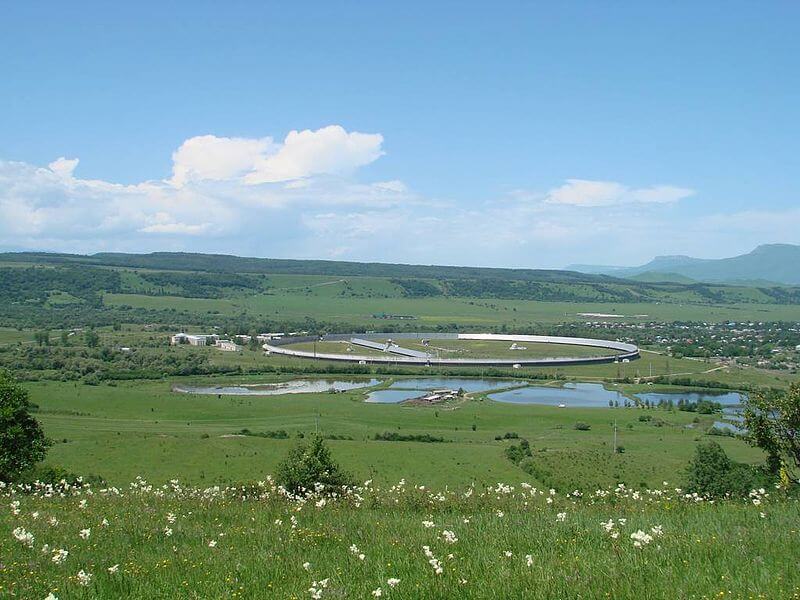 For one glorious moment, it seemed like Earth had made contact with an alien civilization. “‘Strong signal’ from sun-like star sparks alien speculation,” read the headline Tuesday at CNN. The President of SETI’s messaging division officially announced that it came from a star very much like our own sun, and “if it’s artificial, its strength is great enough that it was clearly made by a civilization with capabilities beyond those of humankind.”

In less than 24 hours, the same astronomers had backed off their claim, but it was still fun reading all the astronomical analysis that the incident sparked. One interstellar research foundation noted that civilizations are classified by how evolved their technology is. In the so-called “Kardashev scale,” earth is only a Type I planet. We’re able to harness some of the energy from our own sun and the resources from our planet. But imagine an advanced civilization which can convert all of a star’s power into energy for its own use. That’s what it would take to generate that massive blip in the sky that the astronomers thought they had detected.

One article calculated that a signal of that magnitude would require a trillion watts to transmit.

SETI was also grappling with another interesting question raised by the signal: Why would aliens be contacting us? “This star system is so far away they won’t have yet picked up on any TV or radar that would tell them that we’re here,” noted the official SETI site.

But more importantly, a SETI astronomer pointed out that there’s not much you can do with a signal that doesn’t repeat itself. “It’s like people who see ghosts. If you see it once, but when you go back, with a camera and all that, it’s not there, what do you conclude from that?”

So SETI’s messaging division trained telescopes in California and Panama onto the distant source of the signal, and the group’s president told CNN they were “searching for any brief laser pulses that might be sent as a beacon from advanced extraterrestrials.” SETI’s president acknowledged that “It deserves at least a few hours of observing time by SETI researchers at other locations to make sure we don’t miss an opportunity to make first contact, however remote.”

Of course, as Carl Sagan used to say, extraordinary claims require extraordinary proof, and even early on, there already seemed to be doubts. The supposed signal was only detected once by one Russian telescope. But even then, a SETI astronomer did point out to CNN that “we have not yet covered the full range of frequencies in which the signal could be located.”

Alas, by Tuesday, reporters were already giving up. “No, That ‘Interesting’ SETI Signal Wasn’t Aliens,” read a headline at Seeker.com. “Well that was quick,” added their lede…

“Apologies to the Tin Foil Hat Clan,” wrote CNN, “but that mysterious signal emanating from a star in the constellation Hercules? Yeah, probably not an alien.”

The Applied Astronomy director at the Russian Academy of Sciences — where the anomalous blip was detected — remembered an earlier time they’d discovered a strange signal, only to discover later it was a military satellite. Only later in the day did the academy clarify that “It can be said with confidence that no sought-for signal has been detected yet.”

But if anything else, the event is at least a reminder that we’re trying to make contact. In 2012 humanity even broadcast 10,000 Twitter messages into outer space in the direction of the most promising signal yet received. as well as videos from famous earth celebrities like Stephen Colbert:

“Greetings, intelligent alien life forms,” Colbert said. “I come to you with an important message on behalf of all the peoples of the Earth. We are not delicious… Also, enough with the probes…”

And drawing on everything he’d learned from “Star Trek,” Colbert made sure his message included the phrase “Live long and prosper.”

But this week it was SETI astronomer Seth Shostak who broke the news on the organization’s YouTube channel that this latest signal from space hadn’t turned into an ongoing round of interstellar text messages after all. “We spent two nights looking for it,” he announced. “We couldn’t find it.” But he still had some fun playing with all the possibilities that it raised. “Could it have been E.T., and then for some reason he went off the air…? Well, we still don’t know.

“We couldn’t find the signal, and now the Russian Academy of Military Sciences is saying it was a military satellite. So, no detection yet. But look, you know, you can’t always be cynical. If a signal is looking promising, we are going to check it out!”