What Can the Tech Community Do to Protect Its Trans Members? 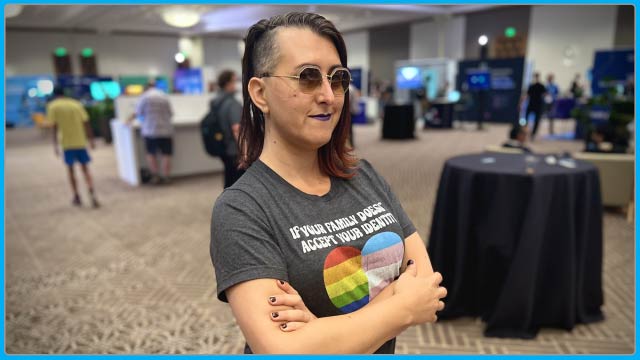 AUSTIN, TEX. — In one of the most compelling keynote addresses at The Linux Foundation’s Open Source Summit North America, held here in June, Aeva Black, a veteran of the open source community, said that a friend of theirs recently commented that, “I feel like all the trans women I know on Twitter, are software developers.”

There’s a reason for that, Black said. It’s called “survivor bias”: The transgender software developers the friend knows on Twitter are only a small sample of the trans kids who survived into adulthood, or didn’t get pushed out of mainstream society.

“It’s a pretty common trope, at least on the internet: transwomen are all software developers, we all have high-paying jobs, we’re TikTok or on Twitter. And that’s really a sampling bias, the transgender people who have the privilege to be loud,” said Black, in this On the Road episode of The New Stack Makers podcast.

Black, whose keynote alerted the conference attendees about how the rights of transgender individuals are under attack around the United States, and the role tech can play, currently works in Microsoft Azure’s Office of the Chief Technology Officer and holds seats on the boards of the Open Source Initiative and on the OpenSSF’s Technical Advisory Council. In this episode of Makers, they unpacked the keynote’s themes with Heather Joslyn, TNS features editor.

Citing Pew Research Center data, released in June, reports that 5% of Americans under 30 identify as transgender or nonbinary — roughly the same percentage that have red hair.

What Can the Tech Community Do to Protect Its Trans Members?

The Pew study, and the latest “Stack Overflow Developer Survey,” reveal that younger people are more likely than their elders to claim a transgender or nonbinary identity. Failure to accept these people, Black said, could have an impact on open source work, and tech work more generally.

“If you’re managing a project, and you want to attract younger developers who could then pick it up and carry on the work over time, you need to make sure that you’re welcoming of all younger developers,” they said.

Codes of Conduct, must-haves for meetups, conferences and open source projects over the past few years, are too often thought of as tools for punishment, Black said in their keynote. For Makers, they advocated for thinking of those codes as tools for community stewardship.

As a former member of the Kubernetes Code of Conduct committee, Black pointed out that “80% of what we did … while I served wasn’t punishing people. It was stepping in when there was conflict, when people you know, stepped on someone else’s toe, accidentally offended somebody. Like, ‘OK, hang on, Let’s sort this out.’ So it was much more stewardship, incident response mediation.”

LGBTQ people are currently the targets of new legislation in several U.S. states. The tech world and its community leaders should protect community members who may be vulnerable in this new political climate, Black said.

“The culture of a community is determined by the worst behavior its leaders tolerate, we have to understand and it’s often difficult to do so how our actions impact those who have less privileged than us, the most marginalized in our community,” they said.

For example, “When thinking of where to host a conference, think about the people in one’s community, even those who may be new contributors. Will they be safe in that location?”

Listen to the episode to hear more of The New Stack’s conversation with Black.