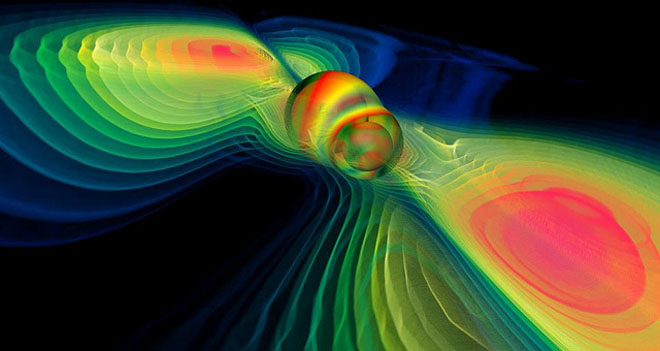 The anticipated collision of these two enormous black holes will release 100 million times more energy than a supernova, and may give us a glimpse of the yet-to-be-observed gravitational waves predicted by the theory of relativity.

A team of scientists from Columbia University believe they have found a pair of supermassive black holes that will soon crash into each other in a collision so powerful that it will send gravitational aftershocks through the fabric of space-time. Scientists are hoping to learn more about how galaxies merge and gain deeper insights into Einstein’s Theory of Relativity, which predicts the generation of gravitational waves during such an event. Located a mere 180 billion miles apart, this binary supermassive black hole pair are one of the few convincing black hole binaries known to us today.

According to the team’s paper, published earlier this month in “Nature,” the black holes are based deep in the constellation of Virgo about 3.5 billion light years away from Earth, in the quasar known as PG 1302-102. They were discovered earlier this year by scientists at the California Institute of Technology with ground telescopes, as part of a survey cataloging quasi-stellar radio sources (alternatively shortened to “quasars”).

Extremely bright compared to our Milky Way galaxy, a quasar belongs to a class of objects called active galactic nuclei (AGN). They lie at the center of galaxies, and their luminosity is believed to be “powered” by supermassive black holes at their center (supermassive refers to a mass equivalent to hundreds of thousands to billions times that of our sun). As these huge black holes pull matter and gas into their accretion disks, hot material and certain spectra of light are ejected out, leaving a bright signature behind.

Quasar PG 1302-102 stood out in particular to the research team, thanks to a strange regularity or periodicity in its light emissions. The team found that the quasar regularly brightened by 14 percent every five years, and surmised that it was likely this pattern was caused by a pair of black holes, rather than one black hole, which typically produces random fluctuations in brightness.

Though the collision won’t happen for 20,000 and 350,000 years from now, the scientists are eager to observe the slow dance of this rare duo further. Says senior author Zoltan Haiman: “This is the closest we’ve come to observing two black holes on their way to a massive collision. Watching this process reach its culmination can tell us whether black holes and galaxies grow at the same rate, and ultimately test a fundamental property of space-time: its ability to carry vibrations called gravitational waves, produced in the last, most violent, stage of the merger.”

The only caveat is that we don’t have the technology to observe these low-frequency gravitational waves that could be generated by black hole pairs — yet. Einstein himself didn’t believe that gravitational waves could ever be detected, since gravity is a relatively weak force, but experts are now predicting that huge progress in gravitational wave detection will be made within five years, as modeling and data analysis techniques improve and the next generation of laser interferometers are being brought into play by international collaborations like the Advanced LIGO (Laser Interferometer Gravitational-Wave Observatory) project, which just re-launched last week after a five-year hiatus.

To give a sense of how difficult the task is, these instruments work by splitting light beams and sending the halves down two 2.5 mile long tunnels, which are then reflected by special mirrors, prior to being recombined back at the starting line and analyzed. If gravitational waves are present, there should be a detectable disturbance in the laser beams — but only about one-thousandth of a proton’s width.

Whether we finally detect these elusive gravitational waves or not, ultimately we have to remember that observing such phenomenon is akin to peering into a time capsule. The far-off distance of these black holes means that whatever collision course these two black holes were on has already happened billions of years ago. As we peer into the sky, we are now only waiting for a fleeting glimpse into the ancient past, waiting for the slow evolution of a distant galaxy to be heard and imperceptibly felt on the subatomic level as its explosive aftermath echoes through the vast cosmos. More over at Scientific American.

SHARE THIS STORY
RELATED STORIES
It Happened to Me: How I Suddenly Owed AWS $13,000... Why Your Code Sucks: Common Excuses for Bad Programming Tech Works: How Can We Break Our Obsession with Meetings? How Jit Builds a Platform Engineering Mindset in the Cloud How Will Working in Tech Change in 2023?
SHARE THIS STORY
RELATED STORIES
How We Manage Incident Response at Honeycomb The Power and Ethical Dilemma of AI Image Generation Models Java's James Gosling on Fame, Freedom, Failure Modes and Fun Platform Engineering Won’t Kill the DevOps Star How Will Working in Tech Change in 2023?
THE NEW STACK UPDATE A newsletter digest of the week’s most important stories & analyses.
The New stack does not sell your information or share it with unaffiliated third parties. By continuing, you agree to our Terms of Use and Privacy Policy.