Fifty-six percent of participants in a new survey who report running at least 50 nodes of Kubernetes deployments couldn't name a leader in K8s backup and data protection, report a New Stack survey.
Dec 14th, 2022 8:36am by Lawrence E Hecht and Heather Joslyn

As the ecosystem of tools around Kubernetes and cloud native technologies continues to sprawl, even some of the IT professionals who use that tech the most can get lost in it.

Case in point: Fifty-six percent of participants in a new survey who report running at least 50 nodes of Kubernetes deployments at their organizations don’t know or aren’t sure which vendor is considered a leader in Kubernetes backup and data protection.

That’s significantly lower than the 38% of survey participants overall who said the same.

The three vendors of Kubernetes (K8s) backup and data protection most often named by the survey respondents overall were: 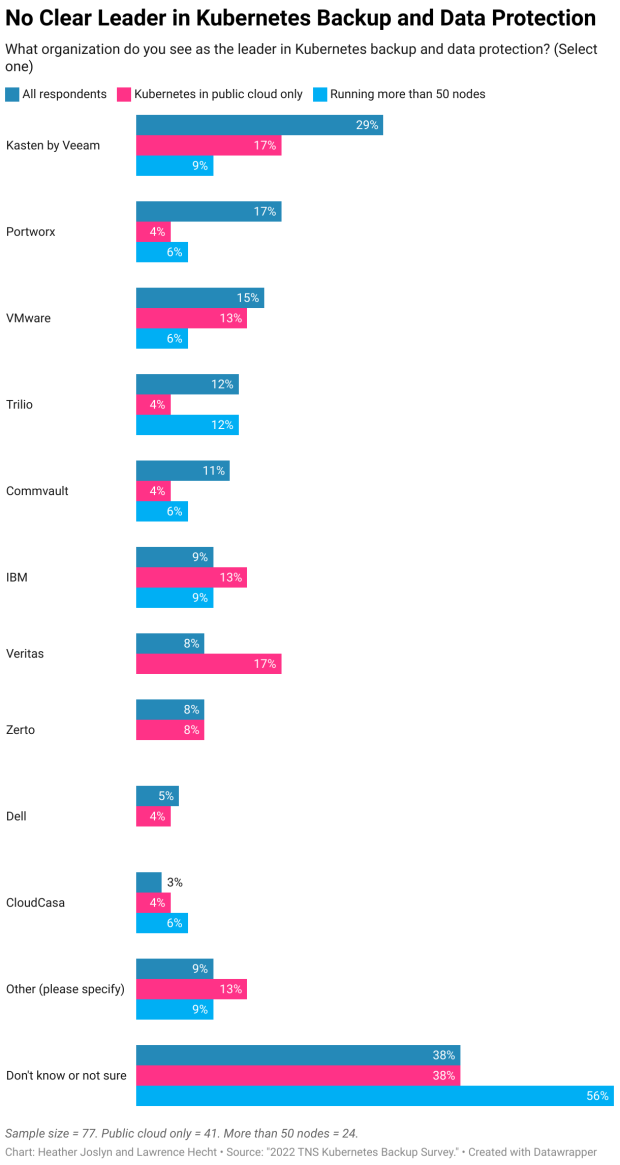 The survey, conducted online in October and November by The New Stack on behalf of its owner, Insight Partners, included responses from 106 TNS readers. Of the people who responded to the survey, 34% identified themselves as DevOps specialists and 30% said their role is not related to backup or data protection.

A Low Tolerance for Downtime

The widespread confusion about which vendors handle Kubernetes backup and data protection is especially significant considering that the study also showed a low tolerance for downtime.

According to the results: 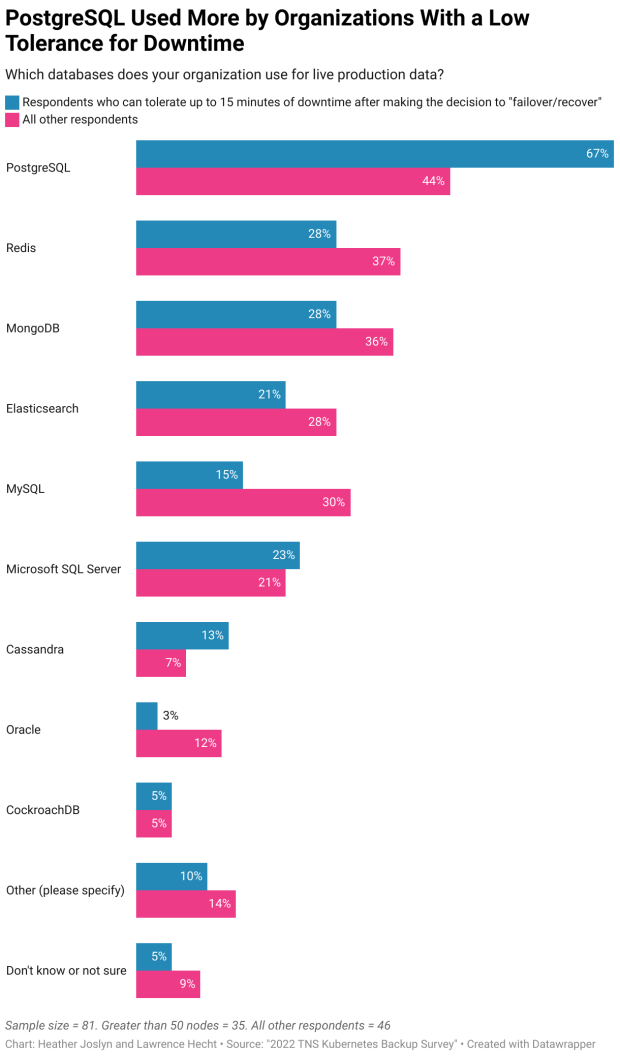 The survey results also offered a glimpse into how K8s are used. Overall, 82% of participants in the report use Kubernetes to manage and orchestrate containerized applications. Just over half (51%) said they run Kubernetes exclusively on public clouds, while 40% said they deploy K8s in hybrid environments — both public cloud and on-premises.

The raw data for the survey is available.

Heather Joslyn is features editor of The New Stack, with a special interest in management and careers issues that are relevant to software developers and engineers. She previously worked as editor-in-chief of Container Solutions, a Cloud Native consulting company, and as...
Read more from Heather Joslyn
SHARE THIS STORY
RELATED STORIES
Hazelcast and the Benefits of Real-Time Data Redis Data Types: The Basics How to Use Time-Stamped Data to Reduce Network Downtime  Cutting Database Costs: Comcast, Rakuten, Expedia and iFood Data in 2023: Rethink the Modern Data Stack
Kasten by Veeam, Portworx by Pure Store and VMware Tanzu are sponsors of The New Stack.
TNS owner Insight Partners is an investor in: The New Stack.
SHARE THIS STORY
RELATED STORIES
AgStack: Linux Foundation Project Will Bring Farms Online The Right Stuff for Really Remote Edge Computing Qlik Plans to Acquire Talend. Is it a Data Management Double-Dip? PromCon 2022: Why Prometheus Had to Change Cutting Database Costs: Comcast, Rakuten, Expedia and iFood
THE NEW STACK UPDATE A newsletter digest of the week’s most important stories & analyses.
The New stack does not sell your information or share it with unaffiliated third parties. By continuing, you agree to our Terms of Use and Privacy Policy.