A Mastodon instance called Toot Wales has recently experienced a big increase in usage. We talk to its operator, Jaz-Michael King.
Dec 15th, 2022 6:00am by Richard MacManus 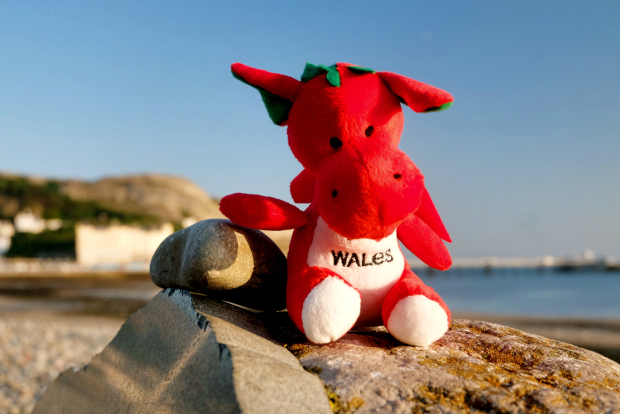 Jaz-Michael King is a Welshman who has been living in the US since the 90s when he moved there to run a Dot Com startup. He still works in the US technology sector, but in his spare time he runs a Mastodon instance called Toot Wales (Twt Cymru), which he pitches as “the Mastodon social network for Wales and the Welsh, at home and abroad.”

I reached out to King to discuss his experiences running Toot Wales, the challenges of scaling up, and what he wants from the Mastodon software going forward.

Like many other Mastodon instances, Toot Wales experienced a rapid increase in usage after Elon Musk took over Twitter. It now has nearly 6,000 active users. But according to King, it’s not so much the uptick in registered users that has been noticeable post-Musk Twitter, but the exponential increase in activity. 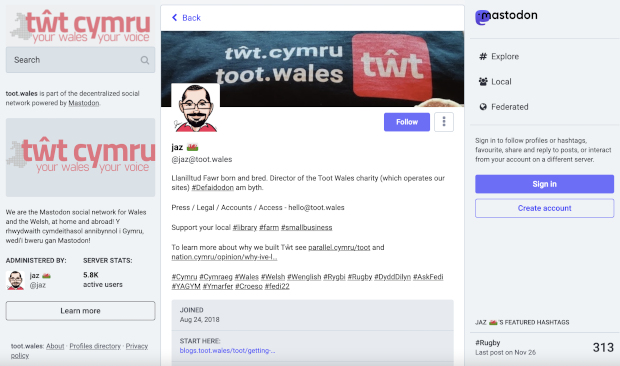 “We had around 150,000 messages a day before he walked into the [Twitter] office with that sink in his hands… I’m now doing between three and four million messages [per day],” said King, referencing Elon Musk arriving at Twitter HQ in late October carrying a kitchen sink. “We’re about triple the registered members,” he added, “but the activity has vastly increased.”

He puts this burst of activity partly down to people who had signed up to Mastodon previously, but who hadn’t got into the habit of using it. Now those same people have resurrected their accounts and are checking them regularly (I’d put myself into this same category, except I’m on the mastodon.social instance).

To run Toot Wales, King outsources most of the technical side of things — even though he’s capable of doing it himself. He uses a well-regarded hosting company called mastohost. “I’ve been with them since the beginning,” he said. “They’ve grown with us, we’ve grown with them.”

King says his own technical involvement is “minimal,” but he does have input on what tweaks he wants for Toot Wales.

“I know enough to ask for what tweaks I want — you know, which buttons I want to push. But I try to keep my hands off it. One of my other rules is we only run the main branch. Nothing experimental, nothing nightly [in terms of software updates]. I want stable, functional, field-tested code. I do a few nibbles around the edges — I used to do a lot more on the front end, [but] with the recent upgrade to Mastodon 4.0, I’ve even taken most of that out. So it’s very minimal. I like to know what I’m running, I like to know what’s working, but I try not to touch it.”

He’s also done some tinkering with the design, mainly so that non-technical users aren’t turned off by Mastodon’s user interface — which even fervid fediverse believers will admit pales in comparison to the Twitter UX.

“One of the changes that I implemented was smoothing out a little bit the UX of the previous iteration [of Mastodon],” he said. “I’m a big believer in not talking about the multi-column view — we’re a single-column server.”

He’s referring here to the layout of Mastodon that looks like TweetDeck, with multiple columns. While this is useful for following lists or hashtag searches, even I have opted not to use this view — it just isn’t as well implemented as TweetDeck (which is owned by Twitter). Perhaps for this reason, on my server the option to switch to multi-column is hidden away in user preferences.

Although he tries not to meddle on the technical side, King has had his hands full dealing with community and content matters since the #TwitterMigration.

“Content and community management, which includes moderation, has been a heavy lift,” he said. “That’s a mix of tactfully describing to people why we’re here [and] why we’re not Twitter — an awful lot of folks think Mastodon was built two weeks ago to fix Twitter. So describing to folks that they’re coming to something that’s 4, 5, 6 years old, and then managing the extant community’s expectations and the incoming community’s expectations, and finding that middle ground.”

When I asked him what he’d like to see improved in the Mastodon software, he went straight to community management. For a start, he’d like “federation and de-federation services baked into the product a little bit more than they are now.” By this he means ways to liaise with other server operators on things like block lists. He wants a means to “cautiously, ethically, carefully share” that type of information between servers.

King would also like “stronger audit options on our moderation actions.” So that, for example, if he suspends an account, he can record precisely why.

“Frankly, depending on your jurisdiction, at some point, you may be required to surrender that information,” he said. “So I’d like to see some stronger content moderation auditing, and account management auditing.”

One of the interesting design decisions that Mastodon took, as an open source software project, is to discourage users from searching for keywords. By default, you can search for hashtags, but (unlike in Twitter) you cannot enter a keyword or other search query — say “Elon Musk” — and expect any results. The implementation of this varies between servers. In my server, for example, if I type in “Elon Musk” I get results from my own posts and posts that I have interacted with (e.g. “liked”). But no results are surfaced from the wider fediverse.

There is an ongoing debate about these search limitations on Mastodon’s GitHub, but I asked King what he thinks of Mastodon’s lack of search functionality and how he manages it for Toot Wales?

“This is one of the things I like about Mastodon, is [that] there’s sociopolitical guidance or guardrails built into the software,” he replied. “It’s at the software level, not at the moderator level. So, one of the largest vectors for abuse online is to search for things that you want to rail on or attack, and use that as a jumping-off point for either attacking that person, or quote-tweeting that person away and pointing at them and laughing, or whatever that may be. So it’s a way to reduce discoverability for folks who would like to discuss a [certain] topic — maybe it’s a marginalized population, maybe it’s a hot-button topic. By not hashtagging it, it’s not that discoverable anymore. And that is very much purposefully built in.”

He noted that people migrating from Twitter have an expectation that they should be able to search for keywords, since that’s what they’re used to on Twitter. But he remains resistant. Indeed, unlike the server I’m on, users on Toot Wales cannot even search their own posts. King has considered turning that option on, but he is worried about the impact on his web host.

“There is one enhancement of search we could turn on, which would allow you to search your own content. I don’t think it’s worth the CPU cycles to be honest.”

A Mastodon for Your Community

The search limitations is one thing to bear in mind when choosing which Mastodon server to join. Personally, I want as much search functionality as possible, as I am a big believer in “topic tracking” on the web. But each to their own.

User preferences aside though, King is doing a great service to the Welsh online community through Toot Wales. He doesn’t make any money from it; in fact, the site is owned by a US charity that King set up.

If you’re looking for a good example of how to set up a Mastodon server for your own community, you’d do well to study Toot Wales.

Richard MacManus is a Senior Editor at The New Stack and writes about web and application development trends. Previously he founded ReadWriteWeb in 2003 and built it into one of the world’s most influential technology news sites. From the early...
Read more from Richard MacManus
SHARE THIS STORY
RELATED STORIES
A Leg-endary Year: Top 5 Internet Technology Stories of 2022 Entrepreneurship for Engineers: Building for Customers’ Love Java's James Gosling on Fame, Freedom, Failure Modes and Fun How Jit Builds a Platform Engineering Mindset in the Cloud How Not to Waste a Senior Hire
SHARE THIS STORY
RELATED STORIES
2023 Will Be the Year FinOps Shifts Left Toward Engineering How to Get Started Filling 3.4 Million Cybersecurity Jobs It Happened to Me: How I Suddenly Owed AWS $13,000... Golden Paths Start with a Shift Left Donald Knuth's 2022 'Christmas Tree' Lecture Is about Trees
THE NEW STACK UPDATE A newsletter digest of the week’s most important stories & analyses.
The New stack does not sell your information or share it with unaffiliated third parties. By continuing, you agree to our Terms of Use and Privacy Policy.