What’s Next for the Cloud Foundry Foundation? A Talk with New Executive Director Abby Kearns 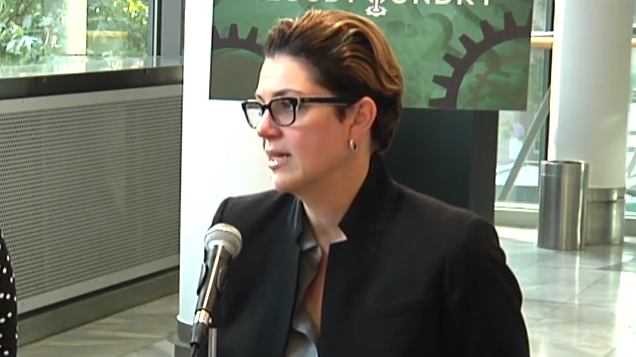 In her new role as executive director of the Cloud Foundry Foundation, Abby Kearns plans to focus on working more closely with developer communities across different markets throughout 2017.

On today’s episode of The New Stack Makers podcast, Kearns discussed how Cloud Foundry has brought its service broker API into the forefront of its toolkit to help developers connect their services quickly and simply in an ecosystem that is all about cross-platform compatibility and highlights some of the future goals of the Cloud Foundry Foundation.

It is the Cloud Foundry service broker API that is quickly gaining traction among developers. “I think services are going to be huge. Having the ability to connect and leverage services as you build that application, at the end of the day you can’t create an application without availability of services,” said Kearns.

Kearns explained that the Cloud Foundry service broker API offers true cross-platform flexibility to allow developers to monitor their services in addition to connecting them. “I think particularly of smaller software companies that are writing and developing software. They want to make it accessible to someone that’s writing their software on a platform. Isn’t it easier to write against a single API and have that service accessible across a variety of platforms? For them, that makes their lives easier. They’re not having to customize their software for each individual platform.”

Ultimately, organizational transformation is the thing Kearns looks forward to the most for the ecosystem in 2017. Where rapid innovation and iteration was once only the domain of startups, enterprises are now coming onto the scene with their own creative ideas and challenges to solve. “I am super excited for the next couple of years as more of these organizations transform the way they write software, and what software they write. How do they engage? How do they leverage the data they’ve got, and expose that in new and interesting ways to their user base? I think we’re only seeing the tip of the iceberg for that.”

SHARE THIS STORY
RELATED STORIES
Composing a Platform by Patching Crossplane Resources Building Access Permissions into Your API 5 Ways to Improve Your Web Application and API Security Twitter Leak Shows How Important API Security Remains in 2023 Planning User Roles for Your Application
TNS owner Insight Partners is an investor in: The New Stack.
SHARE THIS STORY
RELATED STORIES
How to Build an API-Centric Digital Architecture What TNS Readers Want in 2023: More DevOps, API Coverage How to Overcome Challenges in an API-Centric Architecture Platform Engineering in 2023: Dev First, Collaboration and APIs Six Signs You’ve Got an API Sprawl Problem
THE NEW STACK UPDATE A newsletter digest of the week’s most important stories & analyses.
The New stack does not sell your information or share it with unaffiliated third parties. By continuing, you agree to our Terms of Use and Privacy Policy.