When Service Meshes Can Emerge from Envoy/Istio Shadows 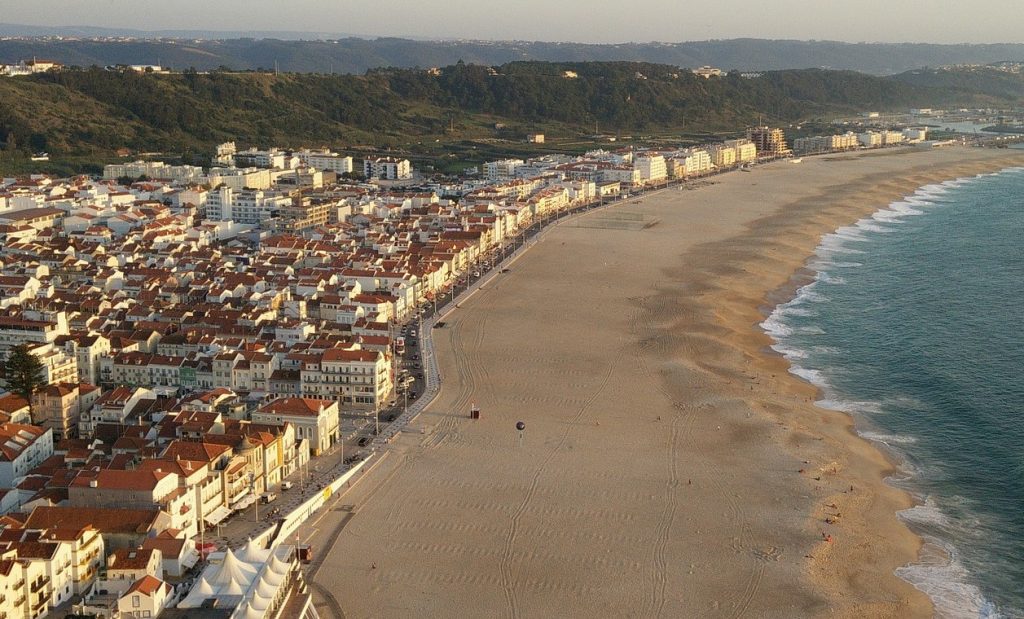 Istio has a big service mesh lead, but only among a segment of early adopters. Among those already using a service mesh in production, 63% have adopted Istio, which is more than twice as many as Linkerd according to our analysis of the Cloud Native Computing Foundation’s (CNCF) survey earlier this year. Besides HashiCorp’s Consul, no other option broke double digits. 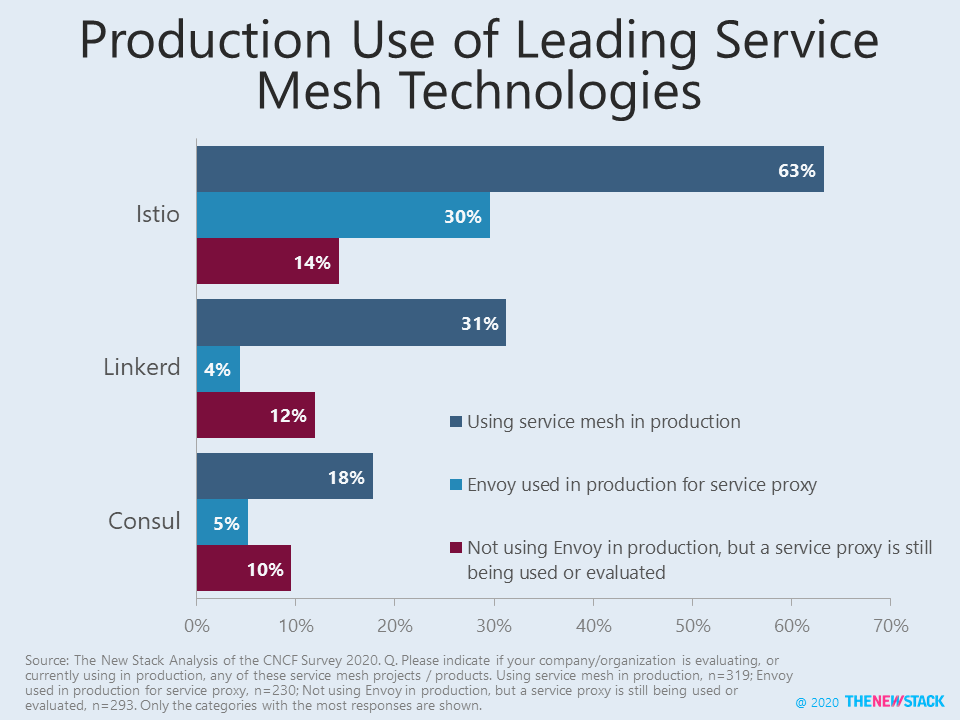 Istio isn’t as intimidating if you strip away the fact that it is commonly deployed along with Envoy, which has undeniably done well recently. Production use of the Envoy project among the CNCF community rose from 17% in 2019 to 24% in 2020. Those evaluating the project dropped from 35% to 21%, which may mean that many organizations considered and rejected Envoy, which can have implications for future service mesh adoption. Not everyone associates Envoy with service proxy or ingress control. When the survey screened for the adoption of this functionality, only 18% used Envoy in a production or evaluation situation. 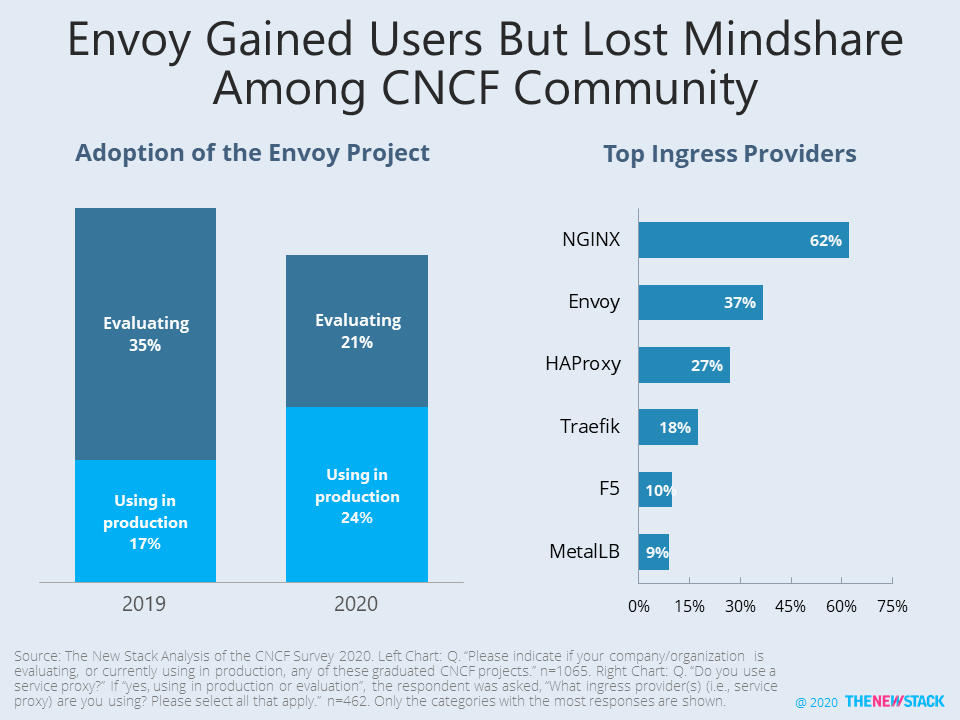 Note: The right chart was updated on February 16, 2022. The order of the providers is the same, but the values are about double that previously because the calculations are now only based on those using or evaluating service proxy.

More than half (55%) of respondents using Envoy for Ingress have a service mesh in production. Another 26% are actively testing a service mesh and 9% plan to start in the next 12 months. Most of that benefits Istio, as well as solutions based on the project’s technology — such as F5 Networks’ Aspen Mesh and Tetrate.

Enter a new data set, which reminds us that not all service mesh adoption will come from a CNCF community laden with vendors and big companies. Using its nginx.org mailing lists and social channels, NGINX surveyed almost 500 people in June 2020. According to Libby Meren, an OSS evangelist at NGINX, 16% of the community uses an NGINX Ingress Controller (NIC), of which 19% also uses a service mesh and another 33% planning to do so in 12 months. Although NGINX’s heritage comes from before the cloud native age, 57% of the survey already use containers in production applications.

As reported previously, NGINX Service Mesh (NSM) is for organizations for which Istio is too complicated for their initial needs. For organizations looking to avoid Kubernetes complexity, so far only 6% of the community is using NSM — but there is a ripe opportunity to get traction among organizations using NGINX for ingress.

Besides NGINX, Traefik Maesh offers reduced complexity by integrating with its own ingress controller. Last February, people kicking service mesh tires wanted to know about solutions that integrated the control and data planes. The market is trying to deliver. In 2021, will the next generation of service mesh adopters decide they don’t need either Envoy or Istio in their stack; and if so, what other technologies best integrate with them? Will simplified offerings such as AWS App Mesh attract users beyond the Kubernetes crowd? 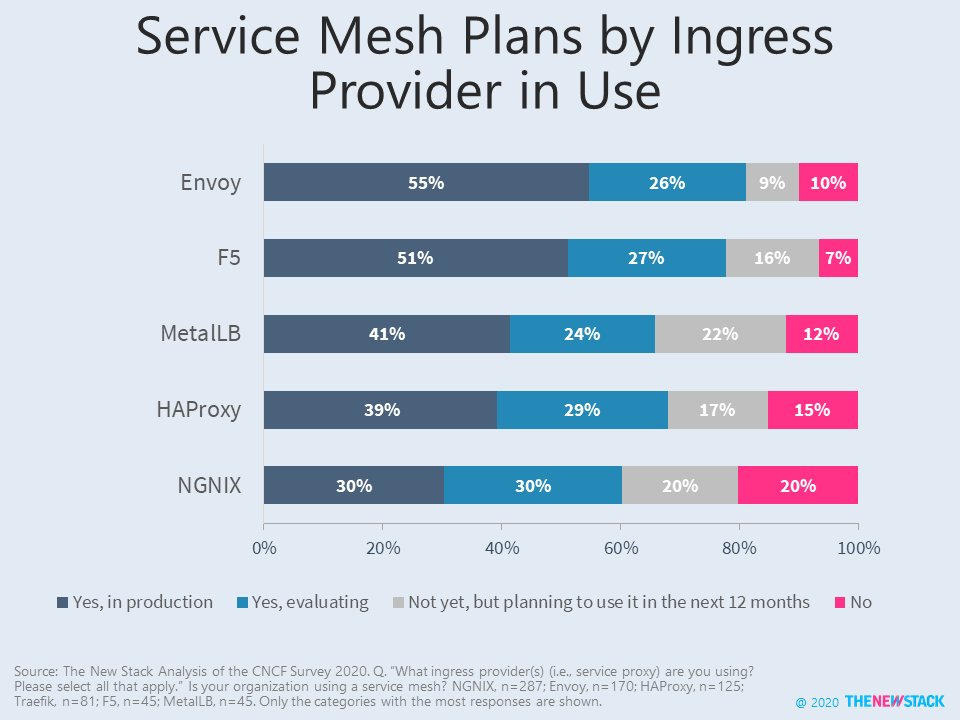 Lawrence has generated actionable insights and reports about enterprise IT B2B markets and technology policy issues for almost 25 years. He regularly works with clients to develop and analyze studies about open source ecosystems. In addition to his consulting work,...
Read more from Lawrence E Hecht
SHARE THIS STORY
RELATED STORIES
The Rush to Fix the Kubernetes Failover Problem Applying Zero Trust Security to Kubernetes Via Service Mesh Service Mesh Gets Boring and That’s a Good Thing Solo.io Intros Gloo Mesh Enterprise 2.0 Is Linkerd Winning the Service Mesh Race?
TNS owner Insight Partners is an investor in: The New Stack.
SHARE THIS STORY
RELATED STORIES
AmeriSave Moved Its Microservices to the Cloud with Traefik's Dynamic Reverse Proxy SoloCon: Explore Service Mesh, API Gateways, GraphQL, eBPF Buoyant Wants to Make Linkerd Easier to Use and Manage 3 Consul Service Mesh Myths Busted Applying Zero Trust Security to Kubernetes Via Service Mesh
THE NEW STACK UPDATE A newsletter digest of the week’s most important stories & analyses.
The New stack does not sell your information or share it with unaffiliated third parties. By continuing, you agree to our Terms of Use and Privacy Policy.