Where Containers Fit into the Oracle Cloud 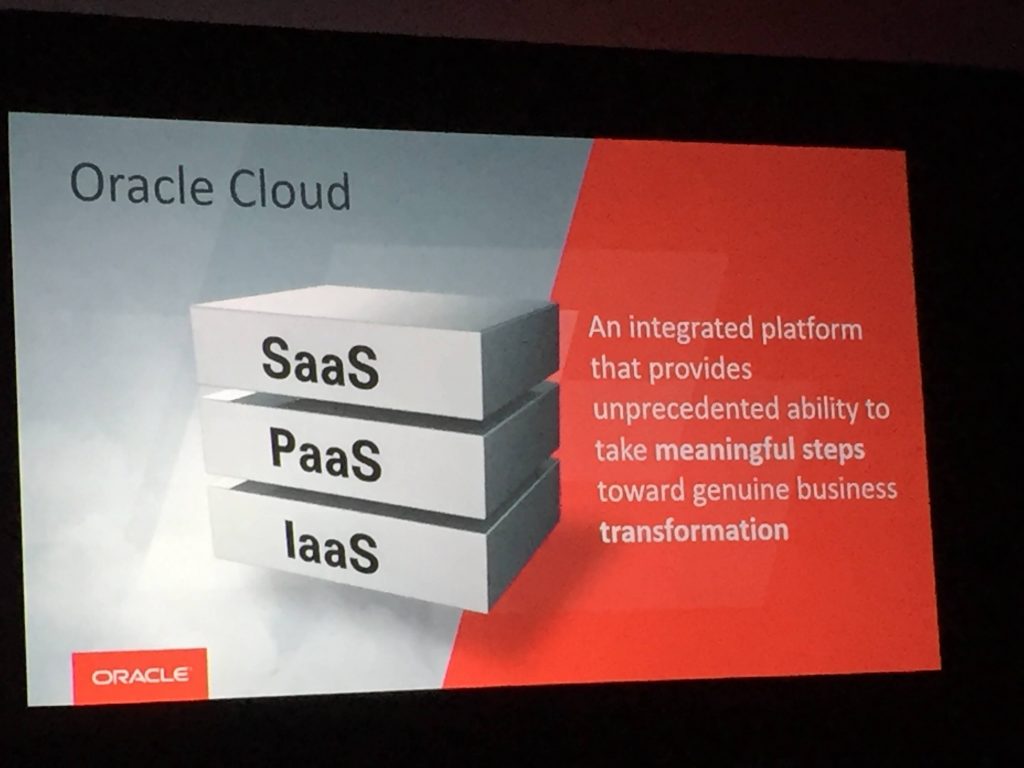 Oracle OpenWorld (OOW) was a not just an about-face for Oracle; it was a turnaround of epic proportions. From Larry Ellison, Oracle’s founder and Chief Technologist, calling the cloud “the dumbest idea of 2013” to the evangelical zeal of his first statement of his OOW keynote circa 2016: “We are in the midst of a generational change,” is more than a change.

To listen to Ellison, one might assume that Oracle has taken to the cloud in a major way, complete with dedicating 10,000 programmers to building out the Oracle Cloud, a set of platform, infrastructure and software services, as well as a marketplace for enterprise software.

OOW, held in San Francisco last month, was cloud-driven, cloud-focused and cloud-enveloped. Keynotes, sessions, banners and t-shirts were all about the Oracle Cloud.

“The cloud is not a fad,” announced CEO Mark Hurd in the opening keynote address, echoing what Ellison said the day before. “This is not just a technical shift — a shift in the industry that happens once a generation.”

Well, duh. But they were speaking to enterprise customers, many of whom have just started dipping their toes into the waters of cloud technology, so there was a lot of explaining to do. And many of the audience were around for the last “once-in-a-generation” change from mainframes to client-server architecture and had seen many fads come and go.

Ellison spent most of his keynote explaining why the cloud is here to stay and how he is going after Amazon Web Service (AWS) the current leader in Infrastructure as a Service (IaaS). “Amazon’s lead,” he said, “is over.”

Most enterprises have merely “touched the cloud,” said Bob Quillin, founder of StackEngine  — which Oracle acquired in December — and is now vice president in the Oracle Container Group, in an interview. But they have only moved a small portion of their workloads there. The official number dropped by Hurd is that 90 percent of enterprise workloads are currently not in the Cloud. 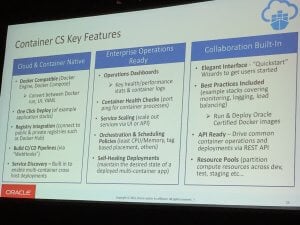 That number, often repeated at the conference, could explain why Ellison is so confident of his AWS take-over. If he can convince current enterprise Oracle customers to use Oracle’s Cloud Network, then perhaps he can give AWS a run for their money.

The conference introduced the company’s latest iteration of the Oracle Cloud, a full-stack, three-tier service, integrating the infrastructure, platform and software services into a single offering enterprise customers.

The complete, integrated suite of products is easy to deploy and run for Oracle’s existing customers, according to Steve Daheb, Oracle senior vice president, for Oracle’s platform-a-a-service and infrastructure-as-a-service Business Groups, in a conference talk. He laid out the business case for the OOW enterprise attendees not yet sure about the cloud. And it’s quite a vision.

To hear Daheb explain it, building cloud-native apps should be a snap, an easy drag-and-drop of components into a mobile device simulator on your screen and voila! You have a mobile app full of sales data or other useful information. 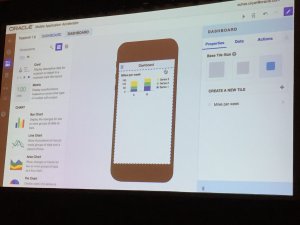 Daheb and Jon Reeve, Oracle senior director of product management, speaking in different sessions, both stressed the ease of which one could move data from existing systems into the Oracle Cloud. Reeve claimed it is easy to get started, easy to move your data, and easy to use.

The bottom line, Daheb said, is reducing complexity for their enterprise customers, hiding the technology as much as possible and providing a simple end-to-end solution. No need to make decisions about which software to use for each block of the stack, they’ve made those decisions for you. Security is stronger because you are not managing permissions to a myriad of software.

Time will tell how easy it is, in reality, to get the system up and running, and how smooth connections to non-Oracle Cloud stack elements work. The winners? Existing companies incorporated into the Oracle Stack, including MySQL and Docker and StackEngine.

Last year, Oracle bought StackEngine, software focused on making Docker easier to use for enterprise customers with on-premises containers to incorporate into the OCN. Quillin said the start-up’s technology is now providing “Enterprise-grade Docker management.” Existing StackEngine customers were moved onto the OCN platform as a part of the acquisition, according to Quillin.

A key component of the Oracle Cloud is its ability to work with what your company is already using, and have the cloud fill in the gaps.

Even though only 10 percent of enterprise workloads are on the clouds, most large companies have already started creating their own stacks. 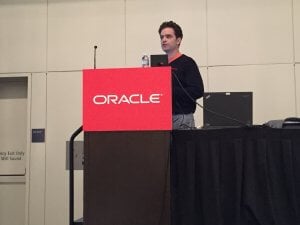 In Reeve’s session, “Docker Agility in the Cloud: Introducing Oracle Container Cloud Service,” he explained that if your system is already using Kubernetes or AWS, the Oracle Cloud can allow webhooks that allow it to work with any current piece of your existing cloud structure.

Are you already on AWS? No problem. Through the API, it can run apps through AWS, but can’t manage AWS cloud through Oracle. Similarly, Google locks you into Kubernetes, but Oracle webhooks can give you access to Kubernetes apps within the Oracle Cloud.

In fact, all of the service platforms are open architecture, complete within themselves, but allowing for webhooks to go out and grab any current data structures or software you are currently using.

Quillin noted a lot of people want to keep their options open because the “orchestration wars” are just starting and companies are reluctant to make a full bet on one.

This is why we adhere to the Docker compatibility, agreed Reeve. Real apps are not going to be 100 percent containers for a long time, he explained, and they needed to accommodate the transition.

Developers are key to this initiative. Oracle has come to the realization that connecting with their customer’s developers is going to be critical, and that message was communicated in keynotes and by both Daheb and Reeve also.

Reeve said Oracle has always had Java, but they are no moving to talk to the developer community directly. Docker and containers play into that, he said, as part of the role of the Infrastructure team is to build a developer audience.

In a big shift for Oracle, they will be targeting developer communities directly. Devs now have their own website within the Oracle world, and they are posting information and hope to develop a robust community.

According to Hurd, Oracle is committing to connecting to developers outside of Oracle and will be doing sessions in 20 cities around the globe for developers in the next year to show the Oracle Cloud product and let devs try it out.