Momentum for a 32-hour week is gaining speed in countries around the world. Recruitment needs, along with greater productivity, are driving the trend.
Jan 9th, 2022 6:00am by David Cassel 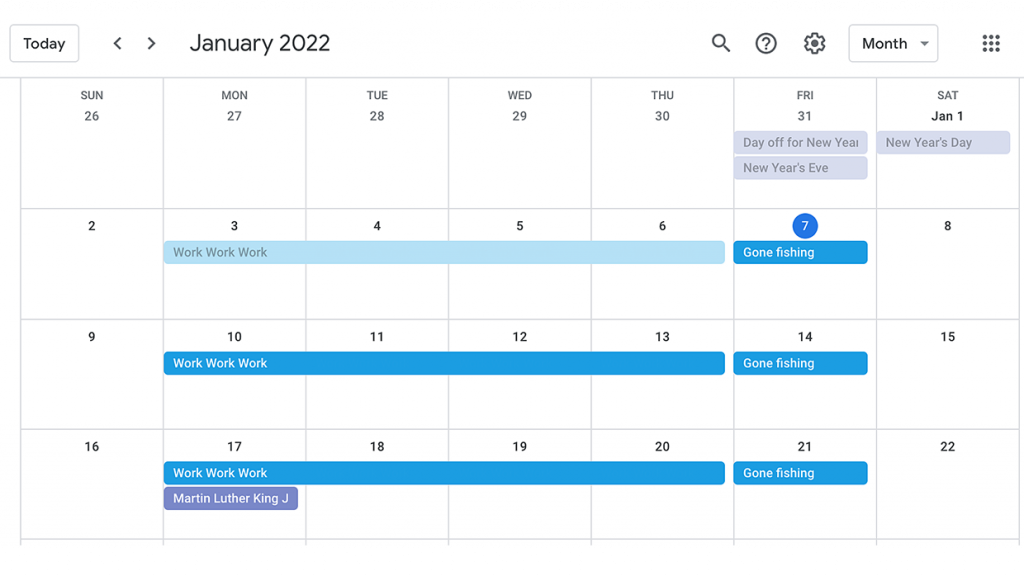 2022 finds a few more companies implementing four-day workweeks. But what’s equally interesting is the reasons why they’re doing it.

“A lot of companies operate with a lot of work theater,” Breslow told CNBC, “which is people caring more about the appearance of working than the actual work.”

But worker productivity isn’t the only reason companies have cited for shortening workweeks. In February, a six-month pilot program testing four-day workweeks will begin in Ireland — and among the 17 companies participating so far is recruitment-services company Yala.

Barry Prost, Yala’s managing partner, acknowledged in a statement that “our main motivation for engaging in the four-day week pilot is to be able to attract and retain high-quality staff to the team. Offering a four-day week will be central to our own recruitment strategy.

“The success of our business is dependent on the caliber of our staff, and we believe the four-day week will give us an edge when it comes to attracting talent,” Prost stated. “We’re looking forward to beginning our four-day week journey in 2022 and watching our business grow as a result.”

In fact, CNBC recently cited a 2019 study by the U.K.’s Henley Business School, which found 63% of businesses saying four-day workweeks made it easier to attract and retain employees (while 78% of employees working four-day weeks were happier and less stressed).

Elephant Ventures, a software and data engineering company based in New York, had a similar experience. CNN reported that the company started testing four-day workweeks in August of 2020 — and ultimately liked the schedule so much, it made the change permanent. (The company now has 54 full-time employees.)

But Art Shectman, the company’s founder and president, emphasized to CNN that the shorter workweeks “absolutely help us win the recruiting battles that you engage in to win top talent and absolutely is a retention benefit.”

Shectman also warned that the shorter workweeks will grow on you: “Once you are adjusted to it, it’s hard to go to another schedule.”

How Common Is a 4-Day Workweek?

Just how common is it? In November, The New York Times cited a March 2020 study by Gallup that found 5% of U.S. workers now have four-day workweeks. In June, The Atlantic’s staff writer Joe Pinsker wrote that “shortening weekly schedules has worked for all sorts of businesses, including factories and nursing homes.

“Anecdotally, workers seem to be happier and more focused, and businesses report getting just as much done,” Pinsker wrote.

The New York Times supplied some specific examples, including recent experiments by the fast-food franchise Shake Shack and the New Zealand unit of the consumer goods multinational Unilever — as well as a new pilot program planned for 2022 by Kickstarter.

In May of 2020, according to The Times, the online children’s clothes retailer Primary tried giving its employees Fridays off, without reducing their pay, and within seven months was so pleased with the results, the company decided to extend it indefinitely.

The idea is now popular enough to attract some interest from U.S. lawmakers. In December, the 96 members in the Congressional Progressive Caucus endorsed “the 32-Hour Workweek Act,” which would require overtime pay after 32 hours. But in this case, Rep. Mark Takano, of California — the author of the proposed legislation — linked his proposal to the lessons we learned from the lockdowns.

“After a nearly two-year-long pandemic that forced millions of people to explore remote work options, it’s safe to say that we can’t — and shouldn’t — simply go back to normal, because normal wasn’t working,” the legislator said in a statement.

“People were spending more time at work, less time with loved ones, their health and well-being was worsening, and all the while, their pay has remained stagnant. This is a serious problem. It’s time for progress.”

Some workplaces in Canada made similar changes during the pandemic. This month, CTV News reported that LemonadeLXP, an Ottawa-based corporate training platform creator, switched all of its 26 employees to a four-day workweek in December. A year earlier, other Canadian organizations, including  Zorra Township in Ontario and The Leadership Agency, a recruitment company in Toronto.

The Leadership Agency’s CEO also linked the change to lessons learned from the lockdown, telling CTV that after making the switch, “People started to invest in their physical health and well-being … and since then, our revenue has more than doubled.”

Whatever is happening in our workplaces, the idea is being discussed. In June, the Washington Post reported that four-day workweeks have at least been mentioned by the prime ministers of New Zealand and Finland; in 2019, the U.K.’s Labour Party even campaigned on shorter workweeks by 2030.

The Case Against Shorter Workweeks

Proponents of shorter workweeks frequently cite the example of Iceland.

The BBC reported that a long-term experiment in the country — which took place between 2015 and 2019 — involved many different kinds of workplaces, including offices, social-service providers, hospitals, and even preschools.

After enthusiastic reception, the program was expanded, and last month CBS News cited an estimate from the Alda and Autonomy think tank that 80% of Icelandic workers now have shorter work schedules. (They add that the think tank ultimately concluded that “working time reduction should be considered a powerful, desirable and viable policy across contemporary advanced economies.”)

But a July article by Anthony Veal, an adjunct business professor at Sydney’s University of Technology, supplies some nuance to Iceland’s statistics. Writing on the nonprofit commentary site The Conversation, Veal noted that in Iceland’s experiment, most of the workplaces (61 out of 66) only reduced workweeks between one to three hours.

The experiment involved just 2,500 workers — though since Iceland’s total population is less than 350,000, this is a significant chunk of the workforce.

After the 2,500-worker experiment, “unions and employers have formalized country-wide agreements to make reduced working hours permanent,” Veal wrote.”But these have provided for a reduction of just 35 minutes a week in the private sector and 65 minutes in the public sector (though larger reductions are available for shift workers).”

In an earlier 2020 article, Veal issued another caveat. When a company tries a shorter workweek, “employees are likely to see themselves as ‘special’ and may be conscious of the need to make the experiment work.” So even when positive results are reported, “painless economy-wide application cannot be taken for granted.”

And that’s an issue that’s played out in the real world, according to the state and local government magazine Governing. The publication reported that when Utah switched all of its state employees to four-day workweeks in 2008, employees in state surveys reported they’d felt “equally productive, if not more so, with the new schedule.”

But a later audit noted the lack of hard data to back up that assertion “and stated that anecdotal evidence shows both gains and losses in productivity, depending on the work unit,” with Utah ultimately switching back to a five-day workweek in 2011.

A Global Trend for Fewer Workdays

Even so, shorter workweeks are now being attempted in other countries. This year in the United Arab Emirates, the public sector will begin following a 4.5-day work week (ending Fridays at noon), according to the Kaleej Times.

The online newspaper Japan Today provides the example of the electronics giant NEC, which now plans to reduce the amount of staff working in the office even further, to 40%, from the 70% levels they’d had before. (NEC will let employees select which days they work and encourage three-day weekends.)

The idea is also being explored in other countries. In December, Reuters reported that Germany’s largest trade union negotiated a trade deal where some workers can switch to a four-day workweek without a reduction in pay.

And in August, Reuters had also reported that Spanish telecommunications company Telefonica began four-day workweeks for 15,000 of its employees — with workers taking a 15% pay cut.

This year, Unilever will reach the one-year anniversary of its four-day workweek experiment in New Zealand, Forbes reported, with Unilever’s managing director for the region promising the company will then review the results and consider expanding it to its 150,000 employees around the world.

Forbes also reports that the Spanish government is trying to jump-start similar experiments, agreeing to pay the cost of giving workers a holiday every Friday.

But whatever happens next, and whatever the critics may say, Íñigo Errejón Galván, a member of Spain’s 14th Congress of Deputies, delved into the ultimate significance of the question in an interview with the magazine. “With the four-day workweek  …  we’re launching into the real debate of our times,” Galván argued.

His own opinion? “It’s an idea whose time has come.”

SHARE THIS STORY
RELATED STORIES
Java's James Gosling on Fame, Freedom, Failure Modes and Fun Platform Engineering Won’t Kill the DevOps Star How Jit Builds a Platform Engineering Mindset in the Cloud Golden Paths Start with a Shift Left 2022 in Review: AI, IT Armies, and Poems about Food
SHARE THIS STORY
RELATED STORIES
Snack Stack: Turning Winter Comfort Food up to 11 Why 'Explainable AI' Can Benefit Business 2023 Will Be the Year FinOps Shifts Left Toward Engineering It Happened to Me: How I Suddenly Owed AWS $13,000... A Leg-endary Year: Top 5 Internet Technology Stories of 2022
THE NEW STACK UPDATE A newsletter digest of the week’s most important stories & analyses.
The New stack does not sell your information or share it with unaffiliated third parties. By continuing, you agree to our Terms of Use and Privacy Policy.