Why Art Could Become Currency in a Cryptocurrency World 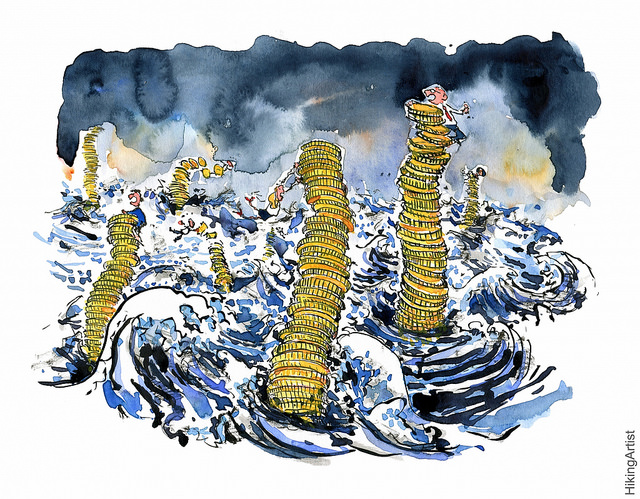 It’s hard to know why a particular piece ends up at the MOMA instead of a garage sale. Nonetheless, the art market has been bubbling with growth a tech startup could envy. Art products are increasingly used by the rich as a hedge against currency fluctuations and as a convenient tax dodge.

The Guardian describes a world where trendy artists “can essentially print money.” These are not your grandparent’s auctions. As Michael Wolff writes, “New work that continues to be produced, of which there is no real limited quantity, and that has no long-term track record of maintaining value, is now worth much more than the work of historic artists with limited availability and demonstrable value.”

Investing in art is risky, because the winds of fashion are fickle, so why is it suddenly popular? Fashion is driven by networks, and powerful vested interests work to reduce the risk. When fashion feels stilted or interchangeable, maybe this is at play. Wolff concludes the real prize is not a Picasso, but having a seat on the board of Sotheby’s.

What can this new frontier of finance teach us? Art products act as a currency, changing hands without leaving the warehouse. The main difference from the dollars and yuan we keep in banks is that art objects are singular (even if there is an appeal to investing in pieces that ape the commodity style.) Imagine the tricks of finance played on top of this backing stock, the derivatives and options, annuities and portfolio funds. Much of the market value of a piece is derived from the social networks of its owners, not its artistic uniqueness.

More than a troubling harbinger of economic meltdown, the financialization of art offers an intriguing hope. Why not steal the core idea — artists creating money out of thin air — and democratize it? With the latest web technologies, we can build a cryptocurrency where each digital coin is unique and singular, just like the art hoarded in Basel and Singapore.

The basic idea is simple: anyone can mint a coin by taking a photograph. Each coin exists only once in the system, and when you give it to a friend, you can’t see the photo anymore. A coin minted to commemorate a great band practice might be used by the singer to tip her barista, who could trade it with a friend who spends it as a show of bonafides to jump the line at the club.

Rather than a CPU-burning competition to power a global ledger, each coin carries an independent cryptographic history. This protocol cannot prevent double spending, but it can make it easy to discover. There is a strong social cost to cheating, and (hopefully) an economic benefit to having a healthy transaction network.

In a system of unique digital objects, is the value inherent in the coin itself, or in the network of transactions surrounding each user? This is similar to the art money of the one percent. Widely used, one can imagine credit agencies paying for the privilege of a glance at your coins.

The Bitcoin world is unlikely to throw out the assumption of a single global ledger, but the idea of using cryptocurrency to track art is catching on. One ambitious project, Monegraph, has set out to solve the real world problems digital artists face, using a mix of technologies, including the Bitcoin blockchain. With this technology, digital pieces can be bought and sold just like physical art.

I’m intrigued by the notion that social networks could eventually replace our currency. If economic growth lives up to the hype, we’ll all live like the rich someday, so why not print our own money, too?

I’ve written this essay because I want these ideas to get out there for anyone to implement. If you want to work on this project, please get in touch.

Chris Anderson is the Co-Founder of Couchbase.

SHARE THIS STORY
RELATED STORIES
Engineering Leaders: Switch to Wartime Management Now There Is No Shame in Customer-Reported Incidents Hacks to Help Open Source Leadership Support Inclusion Artemis Mission, Telescopes Present Data Challenges for NASA How and Why to Respond to Incidents the Right Way
SHARE THIS STORY
RELATED STORIES
Kathleen Booth, Creator of the First Assembly Language What Is a Sociotechnical Knowledge Map and Why You Should Care Artemis Mission, Telescopes Present Data Challenges for NASA SANS Survey Shows DevSecOps Is Shifting Left  Slack: How Smart Companies Make the Most of Their Internships
THE NEW STACK UPDATE A newsletter digest of the week’s most important stories & analyses.
The New stack does not sell your information or share it with unaffiliated third parties. By continuing, you agree to our Terms of Use and Privacy Policy.