Why Swagger Makes APIs Easier To Describe and Consume 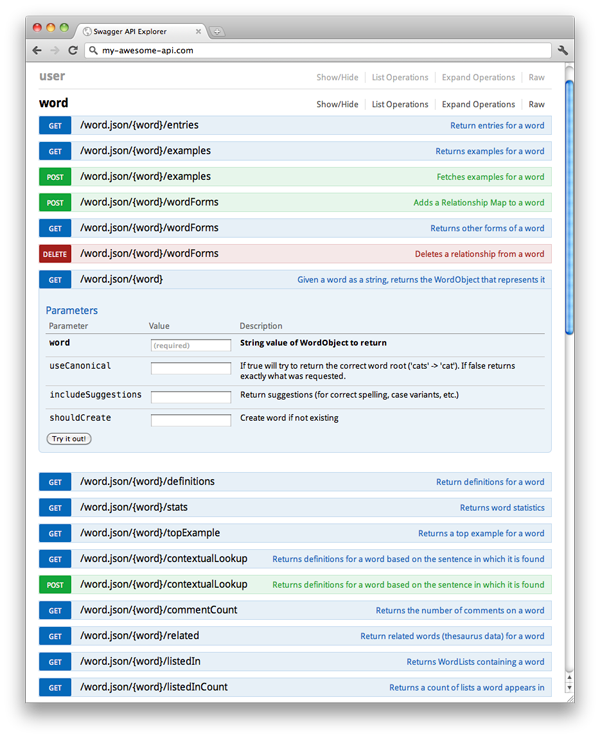 Editor’s Note: Swagger shows how easier it is for the developer to show the business user how APIs are getting consumed.

In the past few months, there have been a few developments that show how the API is abstracting, becoming less complex from a design and consumption point of view. In particular, is the emergence of Swagger, an open standard for describing REST APIs with JSON. At API Days in San Francisco, I sat down to talk with a few API experts to discuss how Swagger is used to create documentation for client and server side code. Joining me were Steve Willmott, founder of 3Scale; Ed Anuff, vice president of public strategy at Apigee; Mike Amundsen of Layer 7 and Kin Lane of API Evangelist. 3Scale, Apigee and Layer 7 are all API management companies.

There have been previous versions of this story before. WADL is an often noted example. Swagger is different in that it was created by a user not a vendor. Wordnik developed Swagger for its own use during the development of developer.wordnik.com and the underlying system.

According to Wordnik it began in early 2010 — the framework being released is currently used by Wordnik’s APIs, which power both internal and external API clients. As noted by Wordnik, Swagger has a declarative resource specification, allowing clients to understand and consume services without knowledge of server implementation or access to the server code.

It has a UI framework for developers and non-developers to interact with the API in a sandbox UI that gives clear insight into how the API responds to parameters and options. Swagger speaks both JSON and XML, with additional formats in the works. The business user, and who the business user is, has changed quite a bit, said Anuff.

You now need to publish for external consumption but to describe the interactions that a mobile app will take. That is not a use case the previous generations of API description languages considered. Business users want to know abou the API calls that are made when a user puts something in a shopping cart.That information can be used to make decisions about popular products people are using. Swagger makes it easier to do.

Apigee is a sponsor of The New Stack.

Alex Williams is founder and editor in chief of The New Stack. He's a longtime technology journalist who did stints at TechCrunch, SiliconAngle and what is now known as ReadWrite. Alex has been a journalist since the late 1980s, starting...
Read more from Alex Williams
SHARE THIS STORY
RELATED STORIES
State of the API: Monetizing API Deployment Is on the Rise What TNS Readers Want in 2023: More DevOps, API Coverage Pro Coders Key to Stopping Citizen Developer Security Breach Improve the Quality of Your APIs with Spectral Linting Six Signs You’ve Got an API Sprawl Problem
TNS owner Insight Partners is an investor in: The New Stack.
SHARE THIS STORY
RELATED STORIES
How to Handle Sessions with Cookies and Tokens  5 Ways to Improve Your Web Application and API Security Twitter Leak Shows How Important API Security Remains in 2023 Building Access Permissions into Your API The Flywheel Effect of Kubernetes APIs
THE NEW STACK UPDATE A newsletter digest of the week’s most important stories & analyses.
The New stack does not sell your information or share it with unaffiliated third parties. By continuing, you agree to our Terms of Use and Privacy Policy.