Wi-Fi Radar Would Allow Users to Track Targets Through Walls 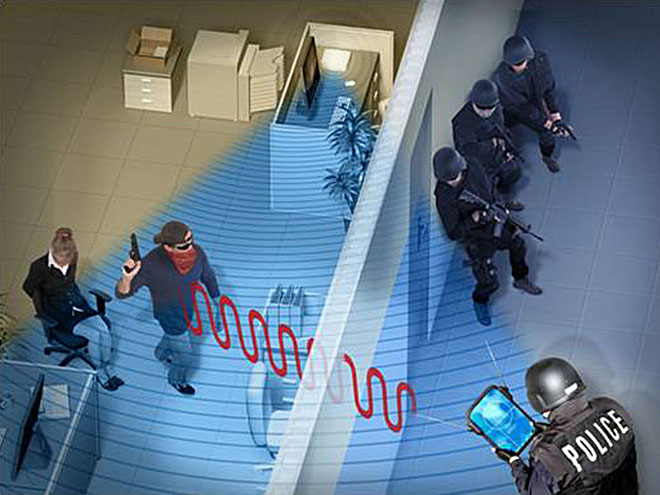 Enterprising researchers are now taking advantage of the all-pervading, ambient fog of radio waves that most of us find ourselves living in. One team created battery-free devices that can be powered by these very signals, and now law enforcement might get a boost from Wi-Fi, too, in the form of a Wi-Fi-based “radar” that would allow them to “see” through walls — even if they are stone or concrete — up to 25 centimeters (9.8 inches) thick.

In a paper published on “IEEE Explore,” scientists Qingchao Chen, Karl Woodbridge, and Kevin Chetty of University College London (UCL) describe experimenting with what they call a “high Doppler resolution passive Wi-Fi radar,” which would allow users to track movements of targets, even down to hand gestures.

A system like this would be extremely useful or even life-saving in emergency situations; for example, for authorities who want to reveal and determine the position of criminals, who might be holed up in a bank, besieged in a building or taking hostages. Of course, like any tool, the technology could also be misused to invade people’s privacy. In any case, all that would be needed is the passive transmission of waves from any regular Wi-Fi router, or mobile phone signals, which would be reflected off an object and bounced back to a detector device.

Here’s how the system works: two multi-frequency, software-defined, FPGA-based transceivers are used to pick up signals from a standard 802.11 Wi-Fi access point, which acts as an “illuminator.” One set of detected signals is used as the baseline reference set, while the other set of signals is used for surveillance. Then this is where the Doppler effect comes in: any slight changes in the frequency of a wave due to the movement of an object, relative to the point of the observer, is compared in order to establish the actual location and direction of the target.

The system is an improvement over previous devices that work in a similar fashion, but would also transmit a telltale signal at the same time. Dina Katabi and Fadel Adib of MIT’s Wi-Vi, which also uses ordinary Wi-Fi signals as a way to track targets, is one example. While the underlying concept is sound, in a surveillance situation this simultaneous transmission might be a dead giveaway to crooks with the right counter-surveillance tech.

Two algorithmic tracking filters, the extended Kalman filter and the sequential importance resampling (SIR) particle filter, were utilized in the experiment, with SIR appearing to offer a higher degree of accuracy. According to “Spectrum IEEE,” the researchers optimized the algorithms’ processing parameters like signal-integration time and detection thresholds, so that a colorful, “radar-style scatter plot” of the target would emerge.

Currently, there are no high-resolution images yet, which would allow users to specifically know who or what they are targeting, but the team is now working to improve the technology as well as develop an application that would enable multiple target-tracking as well. So what does it mean for the future of Wi-Fi? As Wi-Fi access and saturation increases, the mobile ecosystem will no doubt evolve further complexities and applications such as this, and we can expect counter-technology to be developed as a way to evade surveillance. More over at Spectrum IEEE.

SHARE THIS STORY
RELATED STORIES
Why 'Explainable AI' Can Benefit Business Platform Engineering Won’t Kill the DevOps Star Java's James Gosling on Fame, Freedom, Failure Modes and Fun Donald Knuth's 2022 'Christmas Tree' Lecture Is about Trees It Happened to Me: How I Suddenly Owed AWS $13,000...
SHARE THIS STORY
RELATED STORIES
How to Get Started Filling 3.4 Million Cybersecurity Jobs Entrepreneurship for Engineers: Building for Customers’ Love Why Your Code Sucks: Common Excuses for Bad Programming Wellspring of Creativity: Why Public Domain Matters Platform Engineering Won’t Kill the DevOps Star
THE NEW STACK UPDATE A newsletter digest of the week’s most important stories & analyses.
The New stack does not sell your information or share it with unaffiliated third parties. By continuing, you agree to our Terms of Use and Privacy Policy.