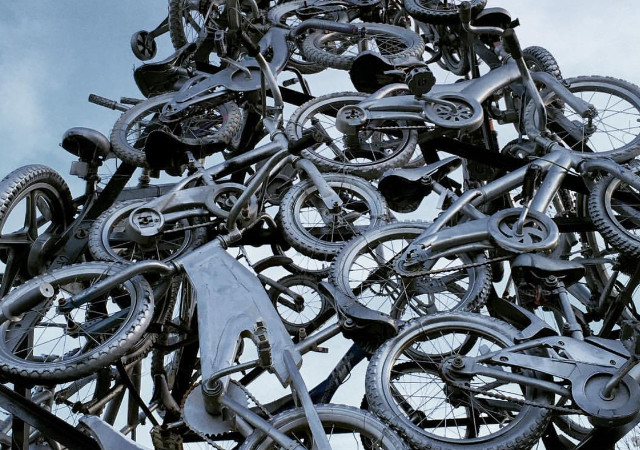 In the last three years, the world has experienced a sudden wave of new smartphone apps offering “dockless” bikes. These apps let their users find the company’s nearest bicycle, then pedal away for a cheap pay-by-the-minute joyride. Users can abandon these bikes anywhere — GPS systems track their location. With millions of rides being sold each user, at least two dockless bike companies already have billion-dollar evaluations in China.

There’s just one problem… Piles and piles of abandoned bikes.

Last month the Wall Street Journal took note of the “profusion of haphazardly parked bikes clogging sidewalks in cities such as Shanghai,” while the Guardian reported on the “colourful chaos”:

“They are parked up by the hundred outside shopping malls and metro stations, often blocking the pavement; others, rendered useless by missing saddles, broken locks or scratched off QR codes, are simply dumped in flowerbeds and bushes.

And in the town of Shenzen, “huge piles of share bikes began appearing in alleyways and vacant lots, dumped in their hundreds.”

The head of communications for Mobike — which offers a fleet of over a million bikes — told the Guardian that the government in central Shanghai has now hired maintenance workers to watch for proper bike dropping off, in an ongoing user education effort. And Mobike is also encouraging its users to report people who drop their bikes off irresponsibly — so they can identify which bike renters to penalize with prohibitively higher rates.

But regardless of the piles of bikes, the Guardian acknowledges that the apps have also “made cycling cool again” in China, especially with young riders in their 20s and 30s. And public bike-sharing is seen as a “crucial” part of a smog-reduction effort in Hangzhou.

It’s also a hot area for startups, as VCs scrambled to get in on what could be the next Uber. A three-year-old company in Beijing named Ofo also has one million bikes, used by its 20 million customers for 10 million bike rides a day. And both companies have raised over $400 million — and are both valued at over a billion dollars.

Both firms also operate in 36 different cities, according to the Wall Street Journal. And in true startup fashion, neither company is currently showing a profit.

In fact, there are twenty bike-sharing companies in China, where 13 of the world’s 15 biggest bike-sharing operating are currently operating, according to The Guardian. The two top operations outside of China are in Paris at #5 — with 21,000 bikes — and London at #12 with 16,500.

So there’s an ongoing tension between aggressive market share acquisition and keeping abandoned bikes from becoming a nuisance. TechCrunch reports that Ofo and Mobike “barreled into the many Chinese cities without consulting first with local regulators,” though one investor points out that Ofo is now working with governments and “always looking for solutions.” Ryan Rzepecki, the founder of the New York-based company Social Bicycles, sees it a little differently. “Shenzhen and Shanghai are starting to put in service standards to prevent chaos in the streets.”

And the next great frontier may be the streets of America….

The Journal notes 104 U.S. cities already have 70 different bike-sharing operations in place — both dockless and “docked” — according to figures from the Bureau of Transportation. But it’s been a rough ride, for these companies. “Urban bike-sharing programs in the U.S. have often been a sinkhole for investors, with low take-up rates and high operating costs requiring public subsidies.”

Mobike already has trials planned for San Diego, while Ofo wants to put 50,000 bikes in U.S. cities by July, but it may be harder than it sounds. “China is not the U.S.,” writes TechCrunch, later pointing out a recent USA Today article that reported less than one percent of America’s commuters cycle to work. One Chinese investor acknowledges that American cities were built around cars.

And more to the point, some San Franciscans weren’t happy when they first discovered the dockless bikes turning up in their neighborhood.

At least there’s a growing awareness of the issues that can come with massive fleets dockless bikes. The National Association of City Transportation Officials announced it supports bike-sharing operations if they’re part of a larger transportation vision. And New York Department of Transportation Commissioner Janette Sadik-Khan worries about “rogue bike systems” that may prioritize their own interests over the cities they serve. “You can create dangerous situations by inviting this tsunami of bikes that could wind up anywhere and everywhere,” she said, quoted in TechCrunch.

But it’s not always red ink. New York-based Social Bicycles is earning a profit, and according to TechCrunch it is now looking to expand its $7 million in funding. Social Bicycles was launched by Ryan Rzepecki, a former project manager at the New York Department of Transportation, who after 17 months recognized the city’s unmistakable interest in bike sharing. His company now has over a thousand bikes in Santa Monica and Portland, and brags that the company has “entered into a partnership with every city where we’re operating.” The system offers small incentives to drop off the bike at a convenient spot — or a financial disincentive if the bike is left beyond a “geofenced” region, a technique Rzepecki describes as “really effective.”

Sean O’Sullivan, founder and managing director of the venture capital firm SOSV, invested in Social Bicycles and shares a darker theory about why the market’s so hot. “Uber’s bad-boy behavior has emboldened some to also break laws and charge ahead of social consequences,” he told TechCrunch.

“They got away with it, and they got rewarded for it financially, despite hundreds of millions of dollars in settlements to state regulators and elsewhere. Until Uber came along, I never thought it could possibly have worked. Now others may see it as a model worth copying.”