What Will Happen after the Robots Take Our Jobs? 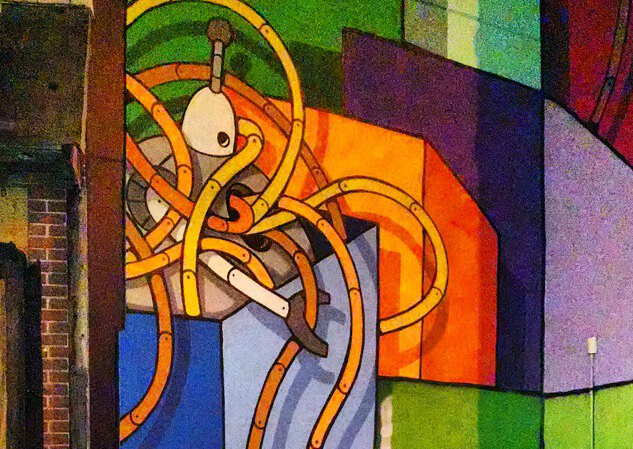 On Wednesday, even Wall Street investors began worrying about a pending robot apocalypse — or at least that moment when humankind’s jobs start being eliminated by automation in overwhelming numbers.

“Not only blue collar but now white collar professionals are being threatened by technological change,” wrote Bill Gross, who manages mutual funds at the Janus Capital Group.

When the 72-year-old investment manager began writing his “Investment Outlook” newsletter, his thoughts suddenly turned to the future of work itself. After a nod to our turbulent political landscape, Gross added noted: “No one in 2016 is really addressing the future as we are likely to experience it.” He cited an aging population, a lot of institutional debt, and, especially, “the robotization of our future global economy.”

“Virtually every industry in existence is likely to become less labor-intensive in future years as new technology is assimilated into existing business models,” Gross noted. Self-driving cars could eliminate millions of jobs, with the same trend affecting manufacturing, service industry jobs, and, yes, investment managers too!

A blogger for the Wall Street Journal later called it “a thought-provoking note from the former bond king.”

Gross pointed out that workforce participation is already four percent lower than it was in 2000 — representing 6 million fewer jobs. “Do you think it’s because Millenials just like to live with their parents and play video games all day? I think not. Technology and robotization are changing the world for the better, but those trends are not creating many quality jobs…” And what about the usually suggested solution — retraining and education? “[T]o be honest folks, I doubt that much of it will be worth the expense.

“Four years of college for everyone might better prepare them to be a contestant on Jeopardy, but I doubt it’ll create more growth; for the Universities perhaps, but not many good jobs for the students.”

Gross isn’t the only one thinking about this issue. Last year, The Atlantic noted that many economists had also started asking the ultimate question: Is any job truly safe? Senior editor Derek Thompson warned of an “era of technological unemployment, in which computer scientists and software engineers essentially invent us out of work, and the total number of jobs declines steadily and permanently,” and he backed it up with a stunning statistic. Among men at their “prime working age,” one in six aren’t working, either because they’re temporarily unemployed or simply because they’re out of the workforce altogether. The article raised the disturbing possibility that this change may be gradual, slowly but surely reducing both our wages and employment itself.

“Eventually, by degrees, that could create a new normal, where the expectation that work will be a central feature of adult life dissipates for a significant portion of society.”

And Gross’s essay leans on the ideas of some heavy-powered thinkers, like Nobel Prize-winning economist Michael Spence, who warned that our ongoing revolution means “the structure of the modern economy and the role of work itself may need to be rethought.” (“The role of work?” responds Gross. “Sounds like code for fewer jobs to me.”)

Gross also quotes from a yet-to-be-released book co-authored by Andy Stern, a former president of the SEIU labor union, titled “Raising the Floor: How a Universal Basic Income Can Renew Our Economy and Rebuild the American Dream,” arguing that right now our society has “built a whole social infrastructure based on the concept of a job, and that concept does not work anymore.” Last month, Stern published an excerpt from the book online, expanding on the idea with his experience as the head of the SEIU.

“Early on, I saw that unions would play only a limited role in shaping the twenty-first-century economy. Not only because unions are typically slow to adapt, but also because the economy is being transformed by new technologies that will automate more tasks and require fewer full-time jobs, and marginalize the role of collective bargaining, leaving a dearth of dues-paying union members,” he wrote.

But of course, you can’t raise the topic of robot overlords — or at least, robot scabs on the picket line — without drawing some responses from the rest of humankind. And the Wall Street Journal’s blog post about the article drew some comments that were skeptical, sagacious, and gloriously insightful.

“What’s harder is seeing the new jobs that will be created using the new technology that does not yet exist.”

“Do you think robot repair and maintenance would become a heckuva lucrative career?”

“I am 64 years old, and I remember this being predicted when I was in high school.”

“The more I think of it …, the more I’m warming up to robots as congressmen and senators …”

Citing Isaac Asimov’s “I, Robot,” one commenter pointed out that robots would also enable otherwise impossible feats like building bridges across oceans between continents. And another commenter shared a thoughtful insight from Marc Andreessen, who in 2012 pointed out a happier scenario in an interview with Wired: the possibility of creative destruction:

So what will happen next? That’s perhaps the more interesting question, and Gross is arguing that instead of trying to re-educate every displaced worker, our money would be better spent on health care, infrastructure improvements, and this trendy new concept of giving humans a universal basic income. “If more and more workers are going to be displaced by robots, then they will need money to live on, will they not?” he noted. It’d basically be an economic stimulus package that never ends — and Gross points out it could be used to buy high-tech product, (wryly suggesting that explains the proposal’s popularity in Silicon Valley.

His thoughts take a weird turn with some obscure talk about “dropping money from helicopters” — economist slang for increasing the supply of printed currency — because “joblessness must be paid for somehow.” The Wall Street Journal added that “while it sounds like an unsound idea, it is essentially what’s been happening since the Panic of 2008 anyhow.” Gross’s lively essay calls it a way to stave off “a civilized society that is quickly becoming less civilized due to robotization.”

And in the face of these massive and wrenching changes, he seems to find his solace in a memory from the 1970s. Twice his essay thoughtfully turns to an old and obscure lyric from a song by John Denver. “If there’s an answer, it’s just that it’s just that way.”