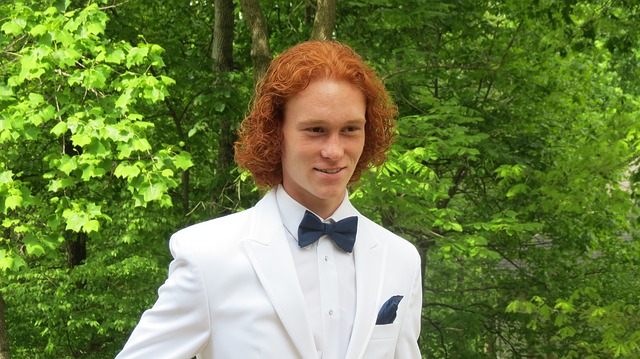 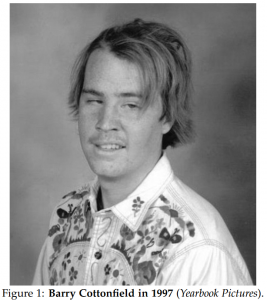 A new research paper with an intriguing title caught the attention of the scientific community — and the world at large — last weekend.

“A Neural Networks Approach to Predicting How Things Might Have Turned Out Had I Mustered the Nerve to Ask Barry Cottonfield to the Junior Prom Back in 1997” first turned up last Saturday at arXiv.org, Cornell University’s repository for electronic preprints of scientific research (one of the 11,008 articles posted). The paper’s abstract dutifully filled in the details:

“We use a feed-forward artificial neural network with back-propagation through a single hidden layer to predict Barry Cottonfield’s likely reply to this author’s invitation to the ‘Once Upon a Daydream’ junior prom at the Conard High School gymnasium back in 1997.”

For her analysis Eve Armstrong, a postdoctoral researcher at University of California San Diego’s BioCircuits Institute created a quadratic equation modeling Barry’s “inability to learn efficiently from large mistakes,” citing as its source his 1996 report card and its grade for algebra. Surprisingly, the final paper is 10 pages long and contains four illustrative figures. And while some scientific figures can be dry and technical, this one vividly brings the story to life. 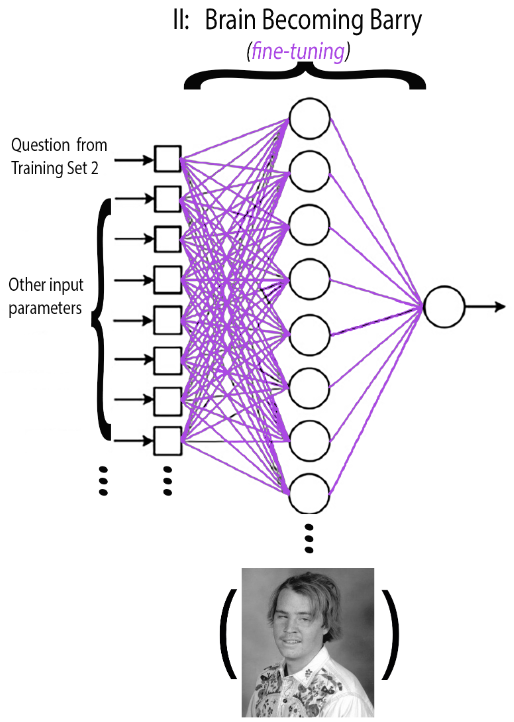 From Eve Armstrong’s paper at arXiv.org

At the end of the paper, there are 19 different references — including “Odes to Barry” by Eve Armstrong, which remains unpublished. And the research even draws on data from the school lunch ladies (“Connecticut Judicial Branch: Small Claims. Lunch Ladies’ Association of West Hartford vs. Cottonfield.”) There are also two references citing “Garby, Officer Frank” — specifically his comments on file in the records division of the West Hartford Police Department.

One bears the suspicious title “Order of Restraint: Armstrong, E.”

Despite its suspicious timing of April 1, the paper strikes a chord because it has something to say about the sophistication of our current technology, and about the messy human problems we’ll want it to solve. It seems to be telling a second story about an unfulfilled relationship with Barry, with its author reporting that the school’s angry lunch ladies and sundry police officers “didn’t know him like I did.”

The paper cites the researcher’s memories of a second-grade see-saw ride, as well as “those expressive eyes of his.” (Adding “see Fig. 1.”) The paper does point out that recognizing these traits required exerting enormous effort — “Obsessive, in fact.” But through diligent research — specifically, copious notes about their high school hallway conversations, recorded in a five-volume diary — Armstrong had the makings for a neural network training set.

Though unfortunately, the data tapered off in 1998, when Barry “learned that he could maximize the chances of evading me by ducking out of class two minutes early.”

The paper has something to say about the sophistication of our current technology, and about the messy human problems we’ll want it to solve.

But over the years those chance hallway encounters led to 24,203 questions. (“See Materials and Methods.”) which has been carefully categorized. One subset of the data consists of 7,345 questions which were asked after Barry had a fight with his annoying kid sister Janice, while 9,557 were not. (“For access to these supplementary materials, please email the author,” the paper adds.)

But How Would He Have Responded?

Yet after all those hallway encounters, there still remains the burning question of whether Barry would’ve said yes if she’d asked him to the prom, the paper reports, even though “an unparalleled number of poems has been written on this topic.” And of course, asking Barry now was out of the question, since “it would have violated my restraining order.”

“Most critically, the optimal method of question delivery is found to be Secret Note rather than Verbal Speech.”

“There also exists mild evidence that wearing a burgundy mini-dress might have helped,” the paper notes, reporting that the mini-dress category overall “beat 726 other wardrobe choices.”

The paper drew surprisingly little interest from the scientific community — though it did turn up on MIT’s list of the week’s most thought-provoking Physics papers. But it eventually drew notice on a site monitoring scientific papers — Retraction Watch — which reported that Armstrong “was gracious enough to answer a few questions about this groundbreaking work.”

Their first question? “Did you seek institutional review board approval for this study?”

Armstrong replies that the requirement was waived, although another inevitable question — “Where do you plan to publish this?” — brought a candid response. “Let me tell you, I am having a devil of a time with this. I approached Cell, Neuron, and the Journal of Neurophysiology, all of whom declined without really citing a reason…”

But the most interesting part of that interview reveals the rest of the story — what happened because Eve failed to ask him out? “Barry wound up taking a piñata to the prom. He showed up halfway through it, with the piñata dressed up to look like a princess, and a lacrosse stick. He beat the piñata ’til the candy came out, stood there eating it, and left.

“It was kind of strange.”

If you’re scratching your head as to the validity of it all, here’s two crucial details: The final reference cites a newspaper article in the Daily Mail titled “Say cheese! The world’s WORST high school yearbook photos…” which suspiciously features the photos used in the paper for both Janice and Barry Cottonfield. 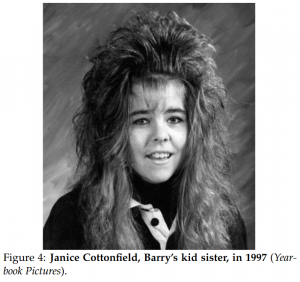 And though the paper was submitted on March 30th, it seems carefully timed for its pre-print publication on arXiv.org two days later — that is, April Fool’s Day.

But Eve Armstrong is a real postdoctoral scholar at U.C. San Diego’s Biocircuits Institute. She’s published over 20 papers, including “An Optimization-Based Approach to Neutrino Flavor Evolution — though at least one of them was published in the always humorous Journal of Irreproducible Results (“Non-detection of the Tooth Fairy at Optical Wavelengths“).

Armstrong gave a more candid interview to Motherboard. “That is my high school, and there was someone I never mustered the nerve to ask to the prom.”

They add that “since Armstrong is a real computer scientist, although the data and experiment are fake the methods are solid. ‘The algorithm is realistic, i.e. everything in Materials and Methods could be used to construct such work,’ she wrote.”

To pull back the curtain a bit more, I persuaded Armstrong to answer a few more questions about her paper. “I had a ton of fun writing it,” she told me in an email.

So what really happened to that guy you never mustered the nerve to ask to the prom?

Asked if future papers will involve Barry, her answer was more tongue-in-cheek. “Let’s wait and see if he responds to the paper posting — or at least drops the restraining order.”

But she finally shared the real intellectual genesis of this project. “I wanted to write something for April Fool’s Day. I chose artificial neural networks as the theme in order to force myself to learn how they work — and how they complement the data assimilation procedures we use in our group…

“The opportunity to make fun of something is generally all the motivation I need to get working.”

She also provided a little more background on exactly what she does. “At UCSD, in the physics theory group of Henry Abarbanel, I create computational models of neuronal networks, and I test those models via a method that is not the same as machine learning (the topic of my April Fool’s paper), but that can serve as a useful complement to it. Henry Abarbanel develops tools to study physical systems that display rich and complex — and sometimes chaotic — behavior. We in his group study neurons, atmospheres, oceans, you name it. Anything that is seemingly impossibly-complicated…

“It is extremely difficult, however, to experimentally determine how these neurons are connected. That is: we don’t know who is talking to whom, or why. In other words: We don’t understand how a network is designed to produce its output electrical signals, or why it produces those particular signals. What I am focusing on now is figuring out what underlying connectivity among the neurons could reproduce those voltage time series. That is — based on the voltage time series — infer who is talking to whom.”

Having successfully convinced us that she was a post-doctoral student, Armstrong went on to describe the response to her paper as surprising and delightful. “I have been contacted by people with varying degrees of knowledge about the topic, including machine learning experts and professors who emailed me requesting the complete training sets so that they could use them in their classes.

“I was honored, and I felt badly having to let them down with the admission that the offer of supplementary materials had been part of the joke,” she wrote, then adding “It’s a privilege to be in the position to make people laugh and/or think.”

Feature image via Pixabay. Other images from Eve Armstrong’s paper at arXiv.org.

SHARE THIS STORY
RELATED STORIES
Building an Internal Developer Platform Isn't Just about Tools How and Why to Respond to Incidents the Right Way The Graph of Life in a Post-Relational World Tackling 3 Misconceptions to Mitigate Employee Burnout How Security Champions Can Change Your Culture
SHARE THIS STORY
RELATED STORIES
Case Study: How Dell Technologies Is Building a DevRel Team Low-Code Tools Improve Devs' Work-Life Balance, Survey Finds eBay: Betting on Open Source Is Great for Your Business Kathleen Booth, Creator of the First Assembly Language How Security Champions Can Change Your Culture
THE NEW STACK UPDATE A newsletter digest of the week’s most important stories & analyses.
The New stack does not sell your information or share it with unaffiliated third parties. By continuing, you agree to our Terms of Use and Privacy Policy.