With Heptio and Pivotal, VMware Doubles Down on Kubernetes 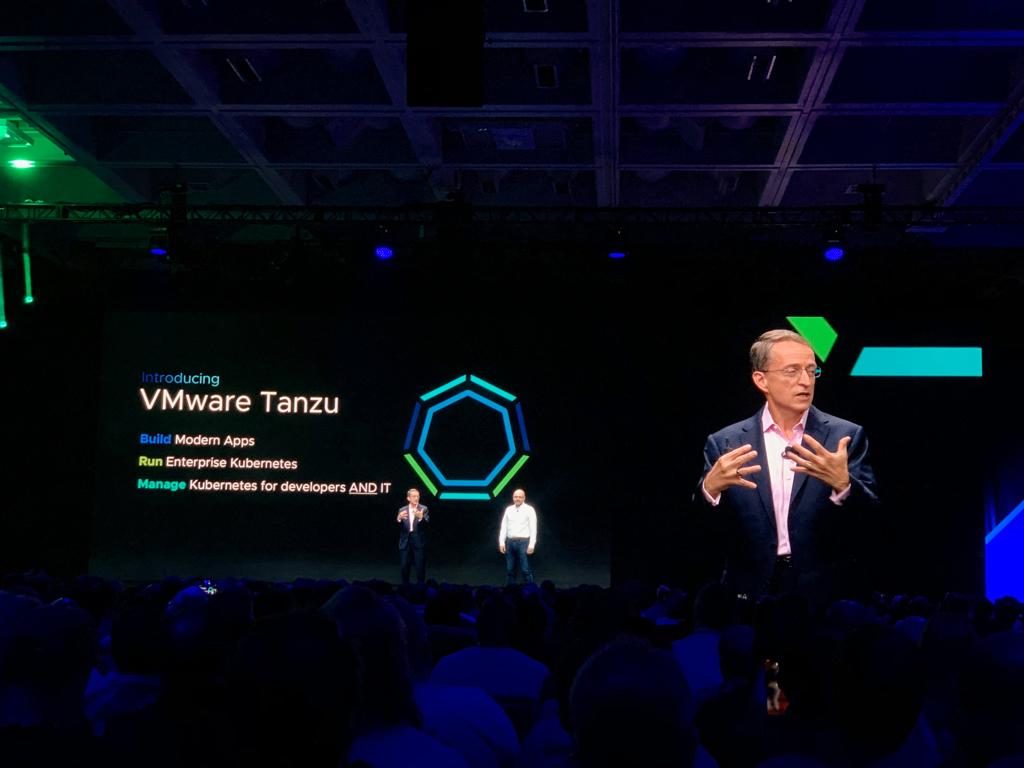 Not too many years ago, when containers were becoming such a hot new technology, the tech industry was talking about what this would mean for VMware. Were containers an existential threat to the mega-vendor of virtual machine technology?

At VMworld 2019 in San Francisco on Monday, the company announced it’s going all-in on Kubernetes, the more recent hot technology for orchestrating and managing containers.

With the size of its customer base, CEO Pat Gelsinger said, “We will be the largest enabler of Kubernetes.”

There were hints the company was going in that direction with its acquisition of Heptio in November, a company founded by Joe Beda and Craig McLuckie, who were among Kubernetes’ founders.

You’d expect VMware to embrace Kubernetes when it has some of the leading experts on it in your company, folks were saying as they were leaving the morning keynote.

Though posited one about the VMware strategy, “It’s not just like embracing Kubernetes, it’s more like driving it.”

The company introduced VMware Tanzu, a marketing name for a portfolio of products and services, existing and new, that will help enterprises build modern applications, run Kubernetes with consistency across environments, and manage all their Kubernetes clusters from a single control point. It will encompass aspects of its recent purchase of Bitnami, a library of packaged installers for web applications and development stacks, and the planned acquisition of Pivotal, which offers application development tools, data management products, and analytics intelligence platforms.

“We view Tanzu as a comprehensive environment for customers to bridge between the development and operational world. It’ll be super-powerful, enterprise-grade Kubernetes platform. Kubernetes is the main tool for this transition, and we now have a lot of work to do to make it work,” Gelsinger said.

The company is building Pivotal applications, making sure Spring works well on Kubernetes and getting involved with open source projects, not just those from Pivotal, but also projects like Knative, Beda said on stage with Gelsinger. This work is in alpha.

“Kubernetes is really flexible, but sometimes you have to be Kubernetes experts to get the most out of it,” Beda said. “What enterprises need is a secure, opinionated experience through this.”

Listening to @pgelsinger talk about @cloudfoundry is a look into the past. Kubernetes, in Gelsinger's view, is the standardization of what Cloud Foundry developed.First developed by VMware, CF was spun out to Pivotal by EMC. Now Pivotal is under VMware. Dell owns EMC and VMware.

The company’s answer is Project Pacific, now a tech preview, which embeds Kubernetes into the control plane of vSphere. This integration is not skin-deep, Beda said. “We’re building Kubernetes deep into vSphere and along the way making vSphere a much better place to run Kubernetes.”

Operations teams have one place they can manage all their resources including virtual machines and Kubernetes resources. Then applications teams will get a self-service experience built on proven Kubernetes APIs. That integration will be deep at the UI layer, but also at the virtualization layer, enhancing ESXi to run Kubernetes in a native way, he said.

“Project Pacific will embed Kubernetes into the control plane of vSphere, for unified access to compute, storage and networking resources, and also converge VMs and containers using the new Native Pods that are high performing, secure and easy to consume,” Kit Colbert, VMware’s chief technology officer for its Cloud Platform business unit, wrote in a blog post. “Concretely this will mean that IT Ops can see and manage Kubernetes objects (e.g. pods) from the vSphere Client. It will also mean all the various vSphere scripts, third-party tools, and more will work [with] Kubernetes.”

It also will provide app-level control for applying policies and access control to developers.

“Mission control brings operators and developers together with one platform. Operators can provision clusters directly from mission control, then they can set policy for things like access, backups, security and more. Meanwhile, developers get the freedom to innovate, to do their best work within the guardrails set up by those operators,” Beda said.

Key to that will be its acquisition of Cloud Health, which helps provide visibility across multicloud environments.

The heavy focus on Kubernetes indicates a couple of things, according to Jay Lyman, principal analyst for 451 Research. First, VMware has increased its strategy and focus on cloud native software such as containers and Kubernetes both organically and through acquisition; and second, it reflects the enterprise reality that many containers still run on top of or inside VMs.

“This is largely how enterprises have waded into containers — providing them to better serve developers and improve productivity and velocity, but running those containers mostly on VMs to give IT operators their tried-and-true, battle-tested VMs that still have good management and tooling around them, particularly isolation and security,” he said. “Thus, while container displacement and replacement of VMs may be growing over time, we expect coexistence of containers and VMs even into the future.”

Few companies have the ability to plug all of the enterprise gaps in Kubernetes, but VMware is one of them, he said, adding “Nevertheless, VMware is not one of the leading hyperscale public cloud providers, so as enterprise cloud native and DevOps deployments increasingly move to the public clouds as we expect they will, VMware will have less of an advantage with its entrenchment in VMs, enterprise data centers and private clouds.”

There’s a very real need for a product like Tanzu, according to Gartner analyst Paul Delory.

“Kubernetes is too complex for the average IT shop to build and operate effectively. We’ve known this for a while,” he said. “Because of this, the public cloud providers have all created their own managed K8S offerings. But these are cloud-specific, and not interoperable.

“So now IT shops have silos of K8S infrastructure living in different clouds. Someone has to be the one who can manage all this infrastructure, across clouds, and make it work together. VMware says they’re the one to do it. I am cautiously optimistic.”

There have been questions about VMware's commitment to open source, said @PGelsinger to media/analysts. The topic came up with @jbeda and @cmcluck when buying @heptio. Signals of what's to come — Gelsinger sees VMware emerging as a top enterprise open-source company.

“These new products will need integrations with a huge number of other tools, workflows and application stacks. The only way to achieve critical mass is to have an active developer community writing all these integrations and creating a library of reusable code that others can leverage,” he said.

“The whole point is to be interoperable, and if their implementation strays too far from the open source codebase, then it loses interoperability. So they have no incentive to build a proprietary version, and in fact, that would run counter to their interests.”

Susan Hall is the Sponsor Editor for The New Stack. Her job is to help sponsors attain the widest readership possible for their contributed content. She has written for The New Stack since its early days, as well as sites...
Read more from Susan Hall
SHARE THIS STORY
RELATED STORIES
Kubescape: A CNCF Sandbox Platform for All Kubernetes Security How to Simplify Kubernetes Updates and Reduce Risk Kubernetes Needs to Take a Lesson from Portainer on Ease-of-Use Testkube Moves to the Cloud in Beta Release Rethinking Java @Scheduled Tasks in Kubernetes
TNS owner Insight Partners is an investor in: The New Stack.
SHARE THIS STORY
RELATED STORIES
Kinsing Malware Targets Kubernetes 4 Ways to Use Kernel Security Features for Process Monitoring How to Simplify Kubernetes Updates and Reduce Risk A Look at Kubernetes Deployment DevPod: Uber's MonoRepo-Based Remote Development Platform
THE NEW STACK UPDATE A newsletter digest of the week’s most important stories & analyses.
The New stack does not sell your information or share it with unaffiliated third parties. By continuing, you agree to our Terms of Use and Privacy Policy.