Amidst Bias, Women Work to Find a Place in Open Source Communities 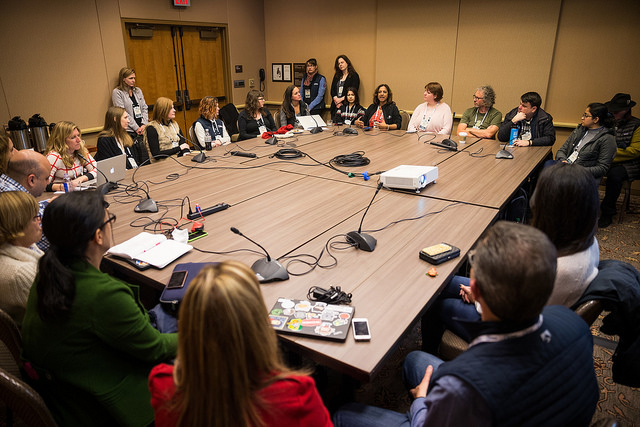 Despite efforts to enhance diversity, women continue to be under-represented in the science, technology, engineering and math (STEM) fields, and open-source software is no different.

A talk at the Linux Foundation’s Open Source Leadership Summit (OSLS), held last week in Lake Tahoe, highlighted some of the issues facing women in the open source community, from low participation to gender bias and unequal pay to overall job satisfaction.

The talk, “Diversity in Open Source,” featured Susan Wu, director of technical marketing at Midokura, an innovator in software network virtualization; Nicole Rutherford, community and developer advocate at Intel, and Daniel Izquierdo is co-founder of Bitergia, a start-up focused on providing metrics and consultancy about open source projects.

Bitergia rounded up much of the data used in the presentation, including information on women’s contribution to the cloud, OpenStack and the Linux Kernel. The latest data available shows that 11 percent of the committers to OpenStack were women, amounting to 640 developers. Women accounted for 9 percent of the overall OpenStack activity, amounting to about 6,000 commits. 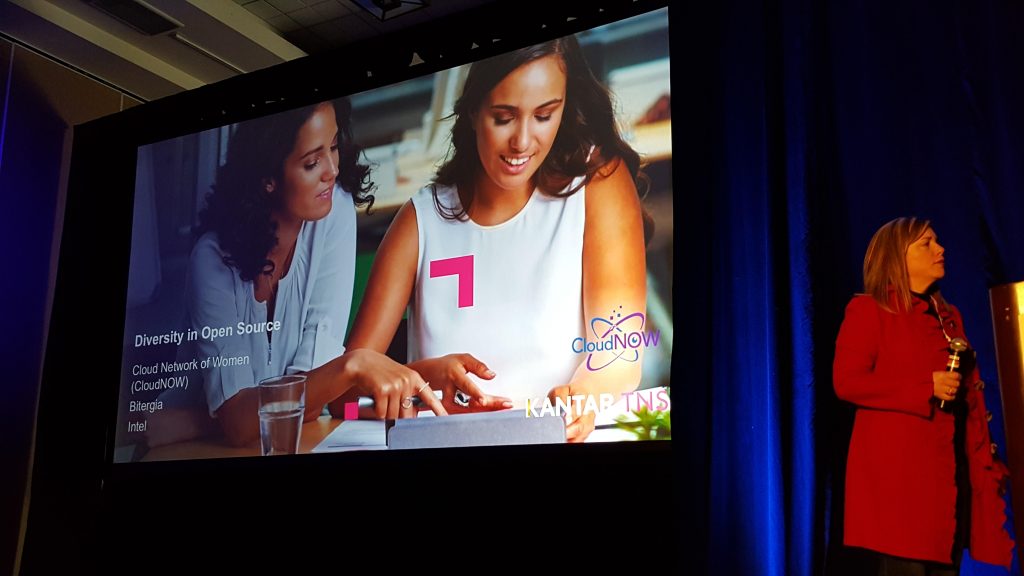 And for Hadoop, 8.5 percent of Hadoop contributors were women, which amounted to 71 women. Women also accounted for just 6.5 percent of all Hadoop activity or about 2,000 commits.

Wu noted that key findings from the study show that while a substantial number of women are satisfied in their jobs, many still face gender discrimination at work. In addition, the study found that financial impacts of missed opportunities due to gender can be substantial. And even in ideal work environments gender bias exists, but female mentors and role models make a positive difference.

Wu also noted that one reason many women don’t get the recognition they deserve is that a segment of the population of women in tech do not come from traditional engineering backgrounds — they find their way into tech from other areas such as biology, healthcare, medicine or other sciences or humanities and often enter coding camps or are self-taught.

“They don’t have the typical high-tech resumes,” she said.

But once women find jobs in the industry, bias soon becomes apparent for many. The presenters cited survey research by Kantar TNS that found 40 percent of women working in the cloud said they were satisfied with their jobs, while 30 percent said they feel stereotyped and only just fewer than half said they believe their company is a true meritocracy. Meanwhile, 48 percent of women in the cloud said they feel that there is a boys’ club in senior management, and 33 percent said gender bias is part of their company culture.

Moreover, almost one-third of the women in the study said they believe they have been excluded from key opportunities at work because of their gender. And 39 percent of those women said that exclusion has cost them as much as $10,000 a year or more.

Other hot-button issues included that many women in tech (70 percent) simply want their male counterparts to stop “mansplaining” all the time. Sixty-eight percent said they’d like to see men not always direct technical questions to only male co-workers, another 64 percent said their male counterparts were dismissive towards women’s ideas and 62 percent decried men acting like a fraternity on the job. 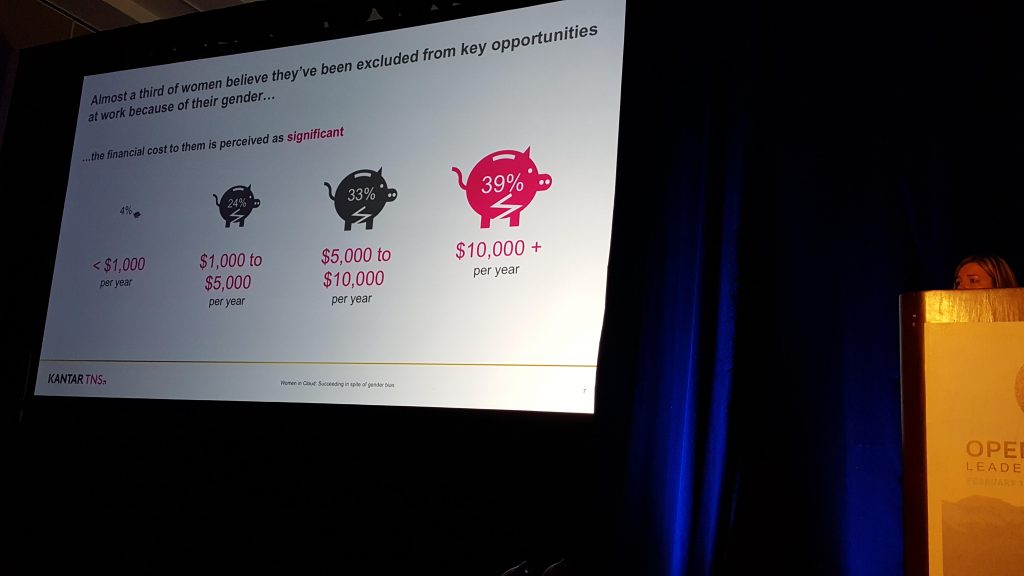 Despite the continued paucity of women entering the STEM fields, the study showed that 83 percent of women surveyed said they would definitely or probably recommend a tech career for their daughters. The study showed that women believe that technical capability and networking are most important for career advancement.

So, women are succeeding in spite of gender bias, but there are ways to facilitate that and to grow the numbers of women in tech.

At the conference, the Linux Foundation and the National Center for Women & Information Technology (NCWIT) launched a free “Inclusive Speaker Orientation” course to help prepare event presenters and public speakers with background knowledge and practical skills to promote inclusivity in their presentations, messaging, and other communications. NCWIT serves as a developer of and clearinghouse for tools and resources for increasing the meaningful participation of girls and women in computing.

“We need to bring cross-community thoughts together,” Rutherford said, making a point she would bring up at a Women in Open Source meeting later. “At Intel, we’re looking at machine learning to reduce the prevalence and severity of online harassment.”

At that Women in Open Source meeting, which eventually filled with a standing room only crowd, Nithya Ruff, an at-large member of the Linux Foundation and senior director of Open Source Practice at Comcast, admonished the group of women and some men to “Go speak at schools; that’s a fantastic way of role modeling.”

Open source veteran Danese Cooper, a distinguished member of the technical staff at PayPal, chairperson of the Node.js Foundation and a board member or member of a host of open source entities, said she looks for opportunities to speak at schools everywhere she travels and finds it invigorating.

“There’s a tendency to put a fair amount of pressure on the developer role — the programmer that makes this possible is why we are here, but we shouldn’t discount the other folks like marketing,” Cooper said. “There are lots of contributions that aren’t represented.”

Rochelle “Rocky” Grober, a cloud technologist at Huawei Technologies, who has a keen interest software quality, added that a major role that does not get included in women in tech numbers is software quality assurance.

For her part, Cooper went on to commend the Node.js Foundation as “the most diverse community” she ever worked for, and cited the Drupal community and the Drupal Association for its strong stance on diversity, largely due to the influence of Drupal and women in open source champion Angela Byron.

Katherina Borchert, the chief innovation officer at Mozilla, cited the Rust language project, which Mozilla launched, as doing “a great job” of enabling diversity and building a culture of diversity around the project.

One woman asked, half in jest: “How do you deal with somebody with a Donald Trump attitude?” while that drew laughter, the notion was nipped in the bud by a speaker said women must demand their basic human rights.

Diversity Adds to the Bottom Line

Meanwhile, in another talk at the conference, Borchert noted that diversity tends to increase a company’s bottom line. She cited studies that showed that gender diversity in leadership positions leads to 15 percent gains in revenue and ethnic diversity led to gains of 35 percent.

Another study she cited said GitHub contributions by women tend to be accepted at an above average rate – unless the contributor is somehow identified as a woman, then their contribution is 10 percent less likely to be accepted.

So, although things have changed for the better the same problems exist: Under-represented minorities still have less access to tech jobs, even in open source.

Indeed, in the early days of open source through today, “If you wanted to join the fight against big software you needed access,” Borchert said. “And that access was only available to a particular subgroup of the population. Behavioral patterns were hostile toward women even if it was unintentionally so.”

And Yet…There’s Still a Ways to Go

Which brings this to a personal level. As an African-American, the issue of diversity in tech has long been of major importance to me. Not only because I cover the industry for a living — and have been doing so for more than 25 years — and like to know there’s opportunity for folks like me to advance in the field. And not just because I have a son studying electrical and computer engineering at one of the country’s preeminent engineering schools and I hope there will be opportunity for him.

But the issue of diversity in tech, particularly women in tech, is special to me because my oldest sister, who was a role model, had a successful career leading IT departments in the federal government and encouraged us all to pursue tech-oriented initiatives. She had her share of stories and would have gladly joined, or more likely led, a “women in tech” group if one existed in her agency.

Ironically, as an African-American tech journalist who happened to attend the Women in Open Source meeting at OSLS, I experienced a taste of what it seems some of the women were talking about. I arrived just prior to the meeting’s start and as the table had just a few open seats, I chose to reserve those for any women who might enter after me. So, I took a seat literally in a corner.

Eventually, as more people drifted in after the meeting started in earnest, it became a standing room only affair. For the most part, new people that entered gave me clearance. However, three young men and a young lady walked in and decided to stand directly in front of me, blocking my view of the proceedings. The young lady soon realized she was blocking me and turned and put her hand to her mouth in a show of conscience and politely kneeled down. She later found a seat when someone left the meeting.

Yet, in her place moved one of the young men, oblivious to my presence. At an earlier time in my life and career, I would likely have made a stink over that, but given that I could shift a bit and still catch most of what was going on, I let it go. It wasn’t worth it. However, a few minutes later when the meeting organizers passed a notepad around for attendees to write down their email addresses for a mailing list, the young man turned to me and handed me the paper.

Somewhat surprised, I said, “So, you actually did know I was sitting here.” He simply replied, “I’m sorry I stood in front of you.”

The irony was rich. He was there to show sensitivity and support for a cause supporting women in tech. And yet, at the same time, he apparently was willing to be insensitive to the black guy. As Borchert said, these things happen “even if unintentionally so.”

Feature image courtesy of the Linux Foundation. Other images by Darryl Taft.

Darryl K. Taft covers DevOps, software development tools and developer-related issues from his office in the Baltimore area. He has more than 25 years of experience in the business and is always looking for the next scoop. He has worked...
Read more from Darryl K. Taft
SHARE THIS STORY
RELATED STORIES
What Is the Docker .env File and How Do You Use It? 5 Best Practices for DevSecOps Teams to Ensure Compliance Crossplane: What Most People Get Wrong (and How to Get It Right) Kubernetes for Windows Swarm, a User-Friendly Alternative to Kubernetes
SHARE THIS STORY
RELATED STORIES
Choosing the Right Container Native Storage for AWS Public Cloud Data, Analytics and AI: What Will Happen in 2023 The Top 4 Threats to Securing Your Cloud Infrastructure Kubernetes App Deployment from the Command Line Kubernetes for Windows
THE NEW STACK UPDATE A newsletter digest of the week’s most important stories & analyses.
The New stack does not sell your information or share it with unaffiliated third parties. By continuing, you agree to our Terms of Use and Privacy Policy.