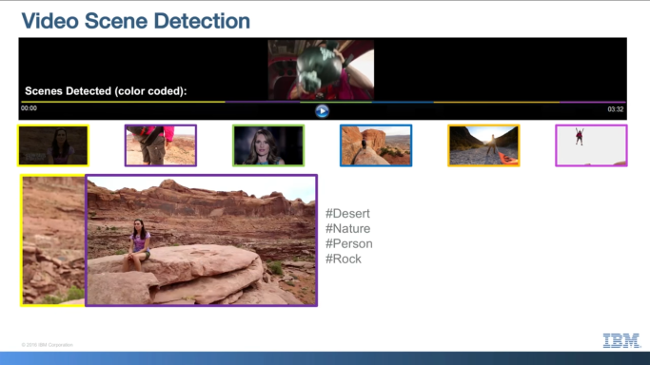 Thirty-three years after “2001: A Space Odyssey” introduced us to the idea of HAL the sentient computer, IBM has made the science fiction real, but named it Watson. The ways in which IBM is putting Watson to work are already pretty amazing, but the possibilities for the future are staggering.

“I thought I knew everything Watson was doing until I arrived yesterday and heard what you all are doing with Watson,” said John Kelly, a pioneer of Watson technology and an IBM senior vice president for cognitive solutions and research, kicking off the keynote speeches at IBM’s World of Watson conference in Las Vegas this week.

There is a lot to know. In the five years since Watson’s debut on Jeopardy on Valentine’s Day, 2011, Watson has gone from answering pop questions in real time to being a critical part of a wide variety of industries across the globe. A trip around the show floor revealed that Watson being used for an extraordinary array of applications.

Companies from a wide variety of industries demonstrated how they are using Watson, such as for tracking medical device data, cancer diagnosis, brewing beer, diabetes management, plane and car navigation, creating hit songs with master producer Alex Da Kid, and helping autistic children better respond to social interactions in real time, to name a but a few.

Watson has hit critical mass, said IBM CEO Ginni Rometty in her Wednesday keynote. By the end of next year, 200 million patients will be receiving some kind of diagnostic assistance through Watson, and one billion people will be using Watson directly or indirectly.

At the conference, IBM announced new partnerships with Staples, Autodesk, Pearson, Udacity, General Motors, Teva Pharmaceuticals, Quest Diagnostics, among many others. U.S. Secretary of Education John B. King, Jr. stopped by to talk about how IBM is helping close the gap between technical skills required by employers, and up the level of science, technology, engineering and mathematics taught in U.S. schools.

Watson is Not AI

But Watson is not artificial intelligence (AI), stressed Rometty, a message that as echoed throughout the keynotes, the technical sessions, and throughout the concourse.

With Watson, IBM’s goal is Intelligent Assistance (IA), she said. It’s about man and machine, not machine replacing man.

Watson does not create intelligence, but it processes and connects data at faster-than-lightening speed from a mind-boggling number of potential sources to provide the basis for what David Kenny, IBM general manager for Watson, calls the “insight economy.” Watson should be judged by its ability to provide insight, not process information.

Think of Watson as a “cognitive assistant,” said Kenny.

The ability to have a cognitive assistant that can pull data across in real time that can access dark data — data already being collected but not utilized — to identify coming storms and alert utility companies to roll trucks before outages happen is a significant advantage, both financial and competitive.

Putting it all together is the Watson Data Platform (WDP), which IBM launched this week.

The WDP makes it far faster to get from data to insight, said Bob Picciano, IBM senior vice president. It was designed to be crazy easy to use so that employees outside of tech can interact with the platform and take advantage of the machine learning of Watson while easily gathering sales data, for example. Picciano said employees “can collaborate seamlessly to make sense of data, ask better questions, and more effectively operationalize insight.” Kenny explained at a press event that the WDP gets data ready to train models, then Watson understands the data and learns from it.

But it takes time to train Watson.

In response to a question of when Watson will speak Thai, Picciano said that Watson needs to be trained in the language. “It’s not just a matter of uploading a dictionary,” he explained. The process is closer to picking up each object and showing it to Watson with the Thai name. Then once the vocabulary is established, it’s necessary to add slang and other linguistic connections.

The good news is it’s taking less and less time with each language and the Watson team is working on making Watson multi-lingual.

Like learning a language, the true advantage of machine learning doesn’t come with Watson out of the gate. The speakers and presenters stressed that this training is what makes Watson more valuable over time.

What is key, said Rometty, is that companies will own the data learning, a decision that IBM feels it will be critical  for enterprise adoption of Watson. The data from your company that results from machine learning stays behind the corporate firewall. Think of it like this, said Rometty, “your data goes to school, learns what it needs to, then goes home to your business.”

A large part of the technology behind Watson is open source, derived from software such as Apache Spark and TinkerPop. And Watson runs on the IBM Cloud. The IBM Cloud and Watson are two sides of the same coin, said Kenny. When questioned, he did say it is possible to use data outside of Watson to use the WDP, but there is functionality being built into the IBM Cloud that will augment the WDP.

Rometty announced that not only does IA extend your expertise, but you are going to need it to remain competitive. Soon.

Are you a developer interested in getting in on this field that is growing like crazy and looks like job security for the next several years? There’s a Watson Developer Conference in San Francisco November 9-10, and it’s only $289 to attend. There will be hack-a-thons, training and certifications available, in addition to the regular conference sessions.