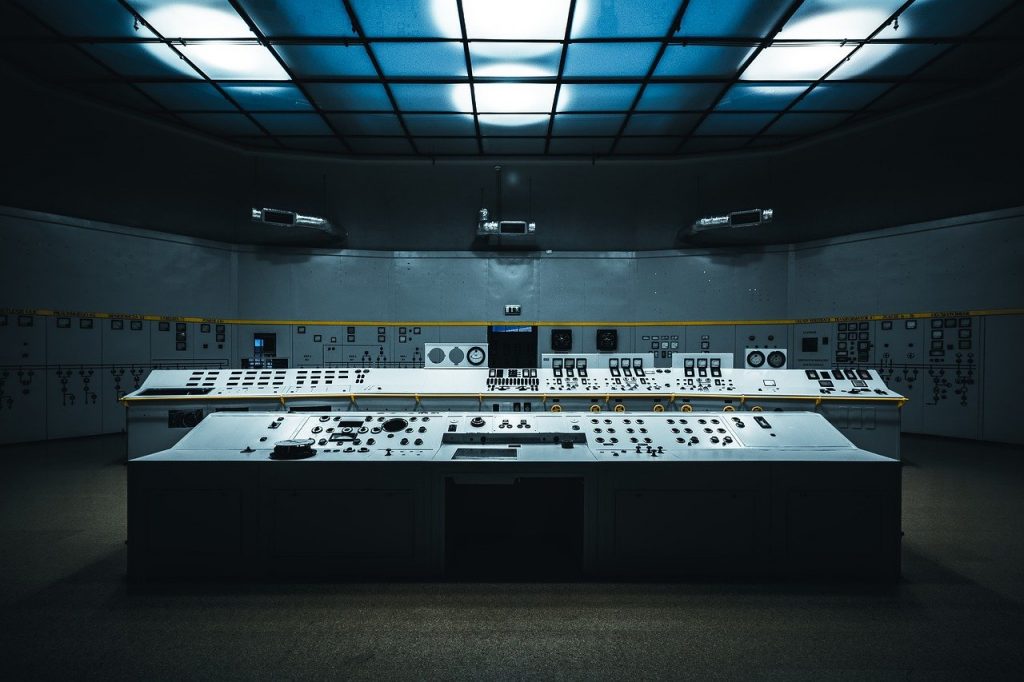 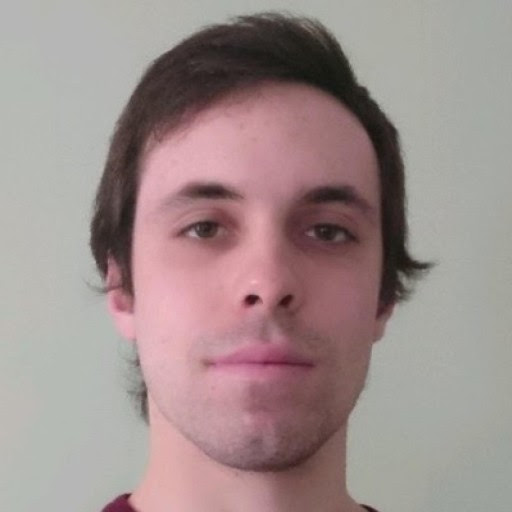 Matteo Olivi
Matteo got his Master of Science in computer engineering from the University of Bologna in 2020. Since 2018, he's been studying and working on cloud infrastructure and platforms, with a focus on Kubernetes. In 2020 he joined anynines, where he is working on building Kubernetes-native automation for life-cycle management of data services.

Kubernetes has already become successful for what it does, orchestrating containers, but it’s also influencing cloud computing because of how it does it.

The design pattern of its control plane, based on a declarative API that lets users express their desired state, and a set of control loops, also known as controllers that drive the “real world” toward the users’ desired state, is proving to be general enough to be used to manage more than just containers.

A symptom of this is the sprawl of custom Kubernetes controllers and APIs written by the community to manage all sorts of resources, such as virtual machines, data services, software-defined networks and many more.

However, while writing a toy custom controller is relatively easy, there are many challenges when writing a production-grade one.

At anynines, we are building a whole control plane based on custom Kubernetes controllers to fully automate the life-cycle management of data services. In doing so, we became aware of many challenges associated with production-grade controllers. This article describes one challenge we rarely see discussed: The “real world” can autonomously deviate from the users’ desired state, so it must be watched by controllers just like the Kubernetes API.

The following section describes the problem. Then, we outline possible solutions before summarizing everything in the conclusion.

For example, if you create a StatefulSet API object, it gets translated into some pod API objects, and then for each pod, a container is started; the containers are a side effect outside of the Kubernetes API.

If the controller modifies some resources outside of the Kubernetes API, then such a design might be flawed. The reason is that it ignores the fact that the state of those resources — the “real” state — might autonomously drift away from the desired state as described in the API object. In such a scenario, the controller won’t receive any notification, so it can’t drive the state of the resource back to the desired state, and the system is not self-healing.

Let’s see an example, shown in Figure 1. Imagine that we have a controller responsible for directly managing containerized apps. (Of course, you don’t want to write such a custom controller because there’s already Kubernetes itself that solves the problem, but bear with us for the sake of the example). If an API object describing a new app with one replica is created, the controller will spawn up a container running the app. If the container crashes because of a bug in its code, bad inputs, etc., no notification on API objects will ever be received by the controller. Yet, it must learn that the container crashed in order to spawn up a replacement as soon as possible to self-heal! 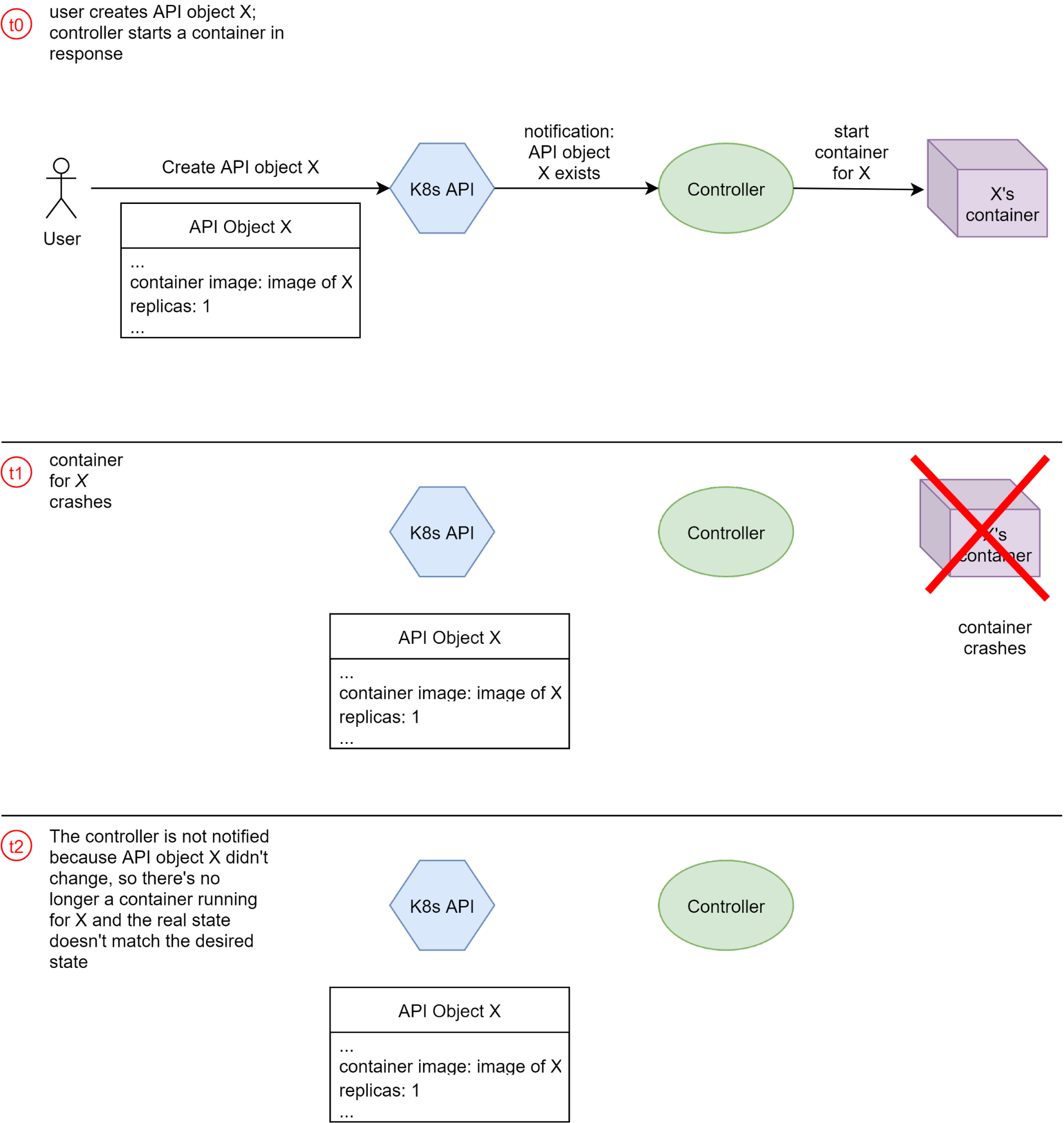 Figure 1: The real state backing an API object can autonomously drift away from the desired state. 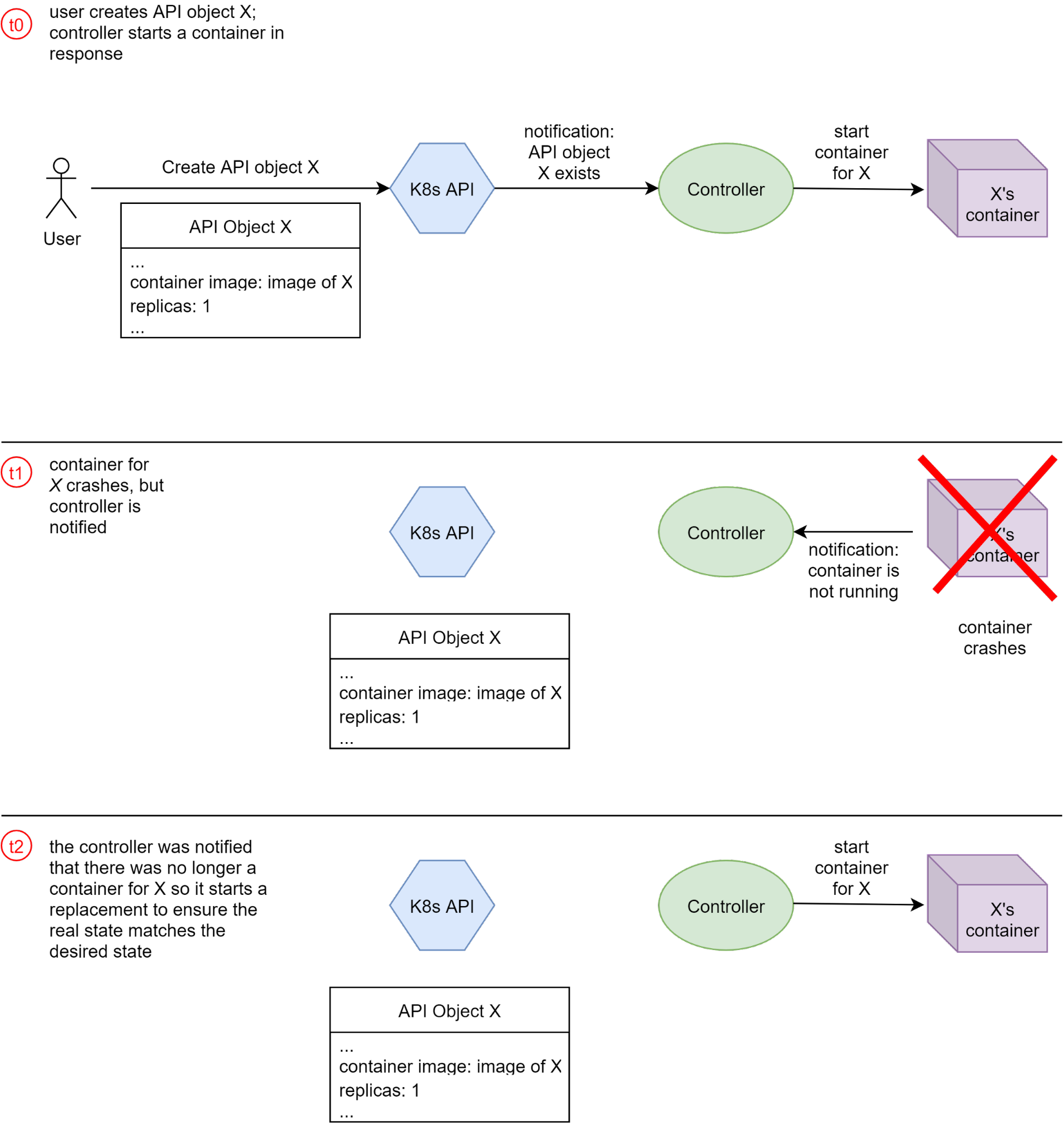 Figure 2: The real state drifts away from the desired state but the controller is notified and reacts.

If you’re building a simple custom controller, you likely can get away with just translating the reconciled API objects into dependent, Kubernetes built-in API objects, so you don’t have the problem we described. Though, if you’re building a whole control plane based on custom controllers that has to support complex use cases, you’ll likely have to write a controller that modifies something outside the Kubernetes API, and then the problem we’re describing might appear.

Unfortunately, there can be no general solution, as it greatly depends on the nature of the resources described by the custom API objects. However, in the next section, we sketch some ideas that can act as foundations to build solutions.

Suppose the actions to modify the resources outside of the Kubernetes API are idempotent. In that case, the controller can periodically re-reconcile each API object even if no new notification is received — Kubernetes has built-in support for this — and re-execute the idempotent actions. If the real state drifts away from the desired one, upon the next reconciliation the real state is fixed. Otherwise, nothing will change since the applied action is idempotent, as shown in Figure 3.

This approach wastes resources because there’s a periodic reconciliation even if there’s no need, and there’s the problem of tuning the reconciliation period.

Figure 4: Mismatch between real and desired state solved by periodically polling the real state as part of the normal reconciliation.

Otherwise, if a complete reconciliation eats too many resources, you can write code that does nothing but periodically poll the real state of each API object and trigger a reconciliation if and only if the real state differs from the desired one, as shown in Figure 5. Such code would run inside the controller process, but it would be separate from the main control loop that fully reconciles API objects. 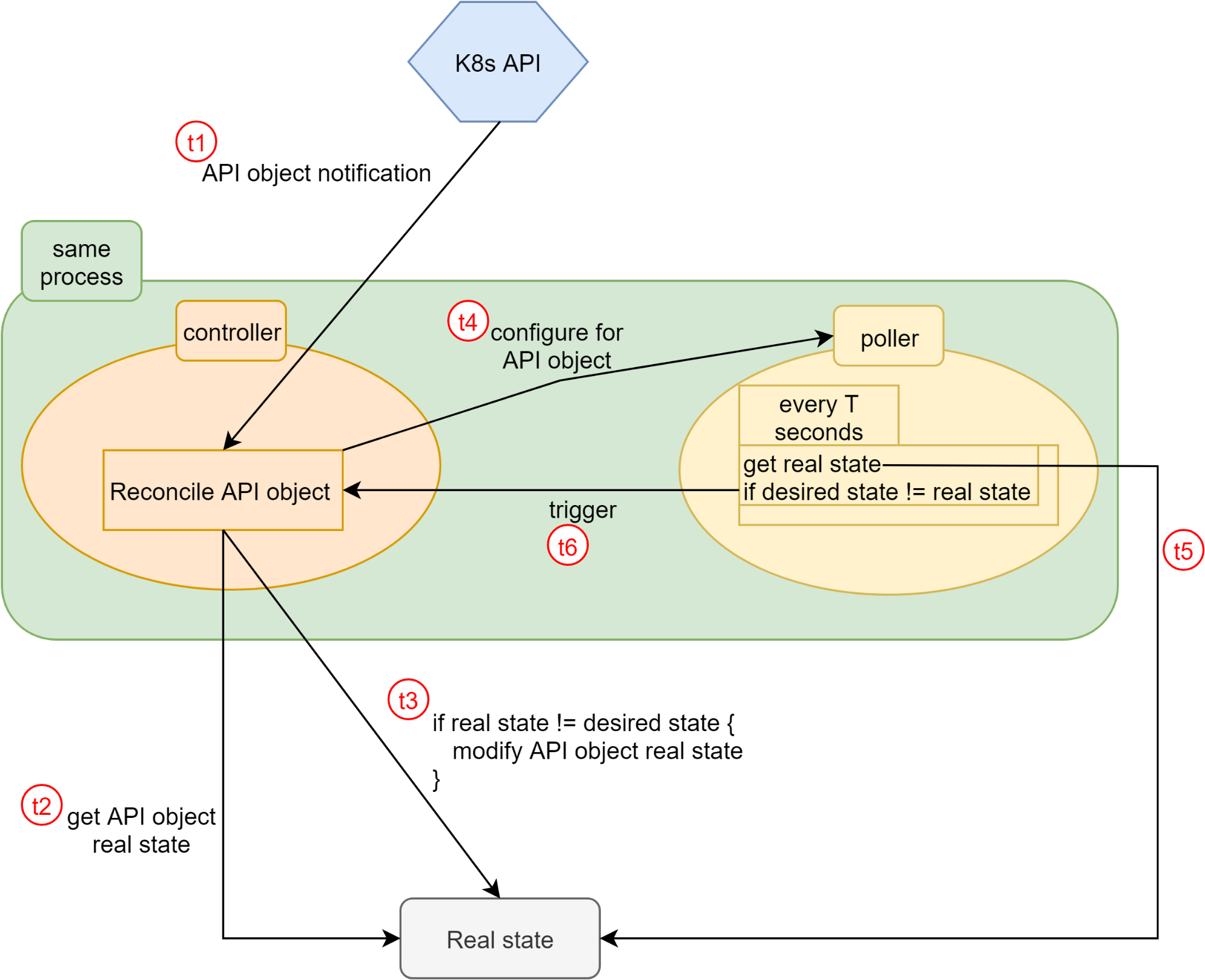 Figure 5: Mismatch between real and desired state solved by periodically polling the real state in dedicated logic and triggering a reconciliation when a mismatch is detected.

The problems with these two approaches are: 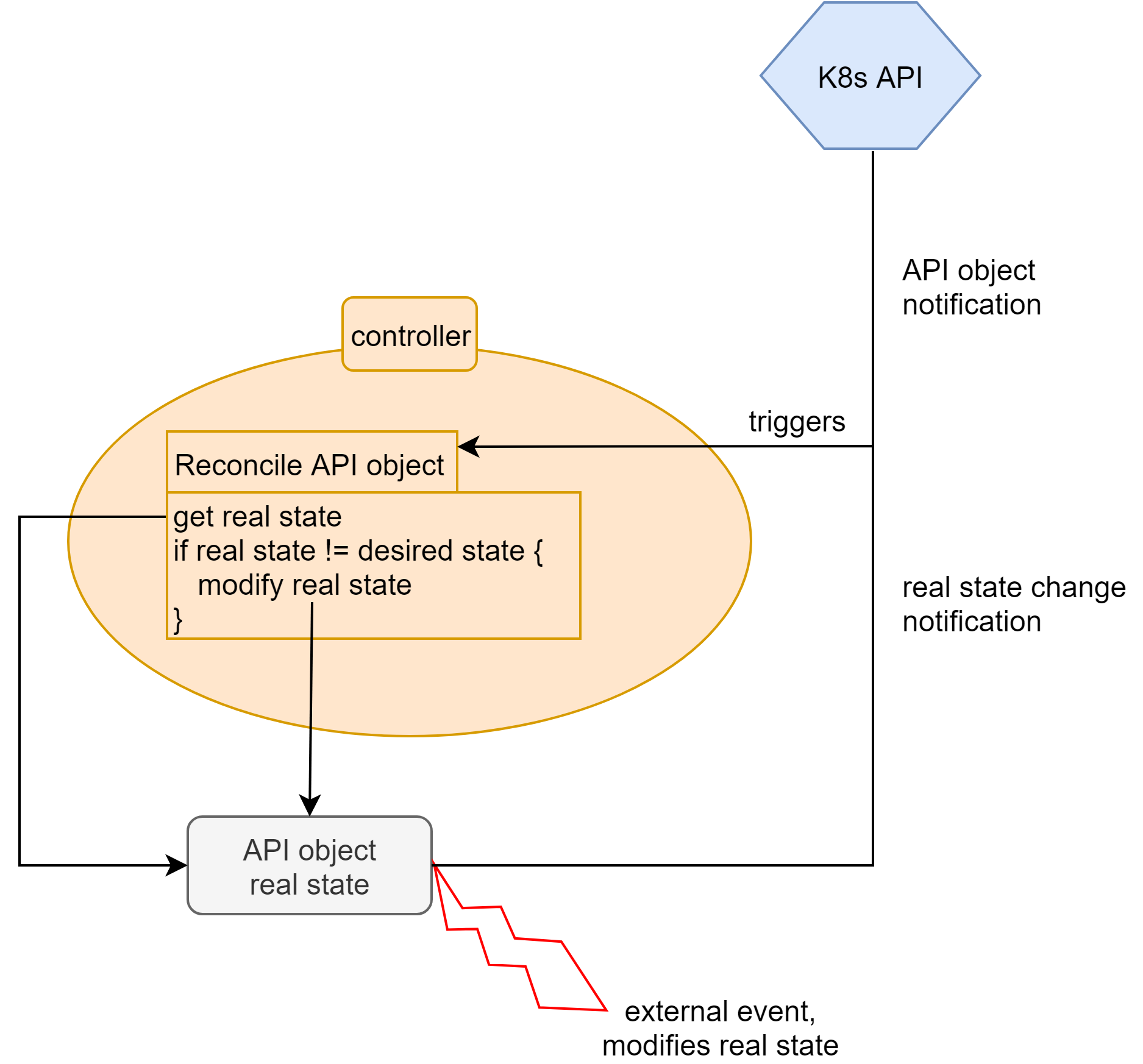 Unfortunately, there are cases where it’s not possible because the real state doesn’t support change notifications.

If you’re in such a case, you can still synthesize notifications from changes to the real state via polling, at the cost of writing, maintaining and operating an additional component. You can write and deploy a “poller” that polls the real state and updates the status of the relevant API object whenever it finds a difference between real and desired state. Such status update will result in a notification for the API object that will be received by the controller, which will proceed to reconcile again, fixing the real state.

anynines is focused on planning, building, and operating modern application developer platforms, as such anynines has years of experience in automating the delivery of enterprise-grade platforms based on various technologies. This comprises platform technologies such as Cloud Foundry and Kubernetes.
Read the latest from anynines

We described one problem that we often see neglected when writing custom Kubernetes controllers: The real state that backs an API object can drift away from the desired state, and the controller must be notified to reconcile the two states even in this circumstance. Then, we sketched some ideas that can be used as starting points to build a solution to the problem. We hope anyone involved in writing custom controllers can benefit from the awareness of the problem we described and the ideas on how to overcome it.