XKCD Cartoonist Explains All the Things 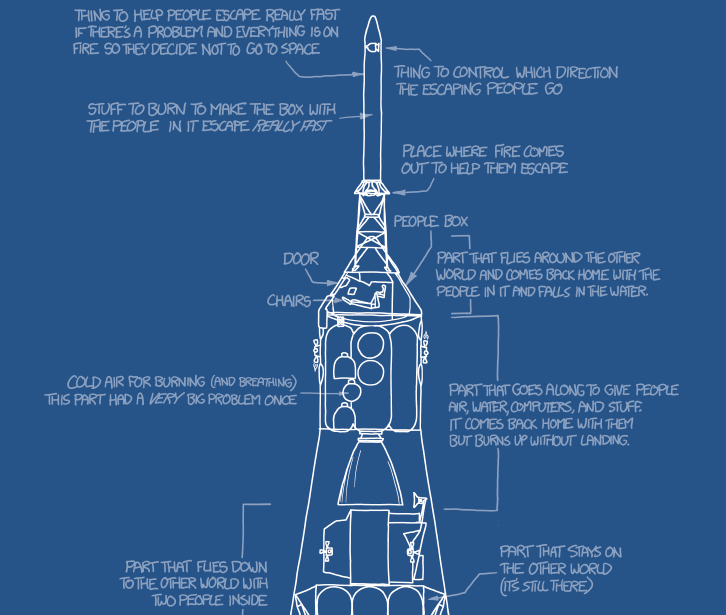 XKCD cartoonist Randall Munroe released a new book on Tuesday, called “Thing Explainer: Complicated Stuff in Simple Words,” and it’s off to a terrific start. By Tuesday night  it had already become Amazon’s #6 best-selling book. But even more impressive, it reached the #1 spot in several subcategories before it had even been released.

The preceding weekend, Amazon’s “Science and Math” section ranked it as both their #1 and #2 best-selling book, thanks to pre-orders for both the hardcover and Kindle edition. And the book also claimed both the #1 and #3 positions in three more subcategories — Trivia, Physics, and Scientific Instruments.

In fact, within hours of its debut, Randall’s books actually held all four of the top spots in Amazon’s section for “Science & Scientists Humor.” The new book held the #1 and #4 position, while Randall’s previous book was at #2 and #3 — and also at #14, for a CD version read by Wil Wheaton. 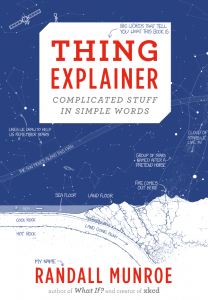 So what’s all the fuss about? “Thing Explainer“ derives its humor exclusively from science and technology. Using only the 1,000 most commonly used words, Randall offers up what turns out to be some humorously simple descriptions of everything from data centers to the International Space Station. In September, he let his fans play with the concept, too, releasing an online tool that checks text and highlights any words which are not among the most-commonly used.

Now that the book’s release date has finally arrived, Randall’s been exploring some more geeky new forms of publicity. Last week “Time” ran an interview in which every question was answered with a cartoon. Randall also turned up as a guest blogger for “The New Yorker’s” Elements blog, explaining Einstein’s general theory of relativity with the 1,000 most commonly-used words. (“There once was a doctor with cool white hair. He was well known because he came up with some important ideas …”)

On Monday the same “New Yorker” blog even adapted one of Randall’s  diagrams into an online science quiz. On Amazon, Randall’s book now even boasts a promotional blurb from Bill Gates (who calls it “a wonderful guide for curious minds.”)

Yes, even Bill Gates is a fan, which he revealed in a post on his own “GatesNotes” blog in October, sharing a comic strip that Randall drew to honor the fight against polio.

Feature image from Up Goer Five, by Randall Munroe.